AFCI's, are they working and saving lives yet?

Here is an image that will give us some idea of what some of the problems are, and although the industry has shown tests and videos and there are lots of Pros and Cons, many are going to support the use of this device: 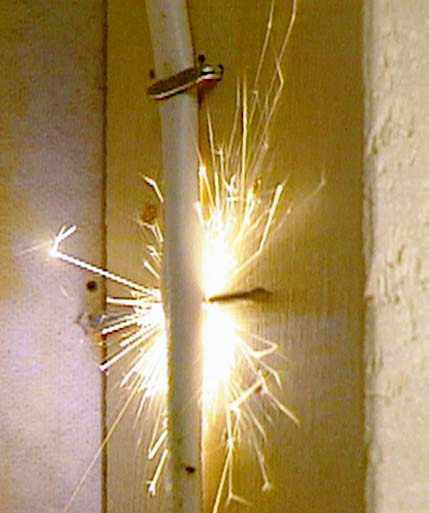 A better picture to demonstrate the intent, would to be a zip cord, buried in dust bunnies under the bed and pinched under a caster or between the mattress frame and the wall. Get an arc there and you can see the issue.

Something else will kill you around here…

What about this burned up equipment! I think that the HI may have missed it and that’s not his fault but think about the question after the fire asked:

“Why didn’t you find that defect during your inspection?”

What about this burned up equipment! I think that the HI may have missed it and that’s not his fault but think about the question after the fire asked:

“Why didn’t you find that defect during your inspection?”

I’m willing to bet a dollar to a donut that that plug didn’t catch fire as soon as it was plugged in. and i’m realy realy sure that an HI didn’t wire it. so…how can you blame the HI for the fire???:roll: 'cuz he didn’t see it??? so now were profits, nostra-friggin-damas??? maybe, just maybe, the plug was operating just fine at the time of the inspection.

reminds me of a story my grandfather told me many years ago. a man falls into hard times and has to sell his truck (i know i know). so he goes to the trading post and the clerk offers him $500 and a horse for his truck. so the man reluctantly takes the deal, rides the horse home in shame and put the horse in the barn for the nite. the next morning he goes to the barn only to find the horse DEAD. he walks 10 miles into town to have a word with the clerk. he tells the clerk the whole story and the clerk looks at him and says…“huh, he’s never done THAT before”. the point of the story is that sometime the end result of things isn’t alway apparent before it happens. that is all.:neutral:

Actually I looked at that plug as the system working. If it was in a box like it should be, the dryer may not have worked as well as it should have and the old familiar smell of Bakelite would be in the air but the fault was contained.
That’s why you guys flag flying splices.
Should the HI pull the dryer plug and look at it? Maybe so but I doubt it rises to the level of liability if your contract is worth a damn.
BTW it might be worth looking at the plugs of high current equipment. This is not that unusual. I had a pool pump plug looking like that last week. Again the fault was contained but it did need fixing.

240 window AC units are getting hard to find

With so many variations of installs and locations and possibilities you can argue that “we can’t find everything within the few hours+ visual inspection” but this is NOT an excuse or to state that we shouldn’t be diligent in looking at everything we can…
Can we find every possible faulty issue present in homes? No way. Cases where the homeowner hides amateur work , or installations that do not allow the inspector to look behind appliances due to methods of installations are practically impossible to inspect without dismantling or moving the darn thing…:eek:
Gas lines for (wall unit stoves) in kitchens are a perfect example… Have they used the old copper color flex gas pipe… Move it and you change it!! The gas Co is tells us to warn the owner / buyer that needs to be changed ASAP…BOOM!!! We move the stove, dryer and you could be breaking the seal… I use mirrors and camera to get around that but it doesn’t always work either…

April 20, 2004
Dear Mr. Tedesco:
On behalf of the Board of Directors of the National Association of State Fire Marshals (NASFM), I would like to express our appreciation for your commitment to fire prevention and fire safety on behalf of your organization, the National Association of Certified Home Inspectors (InterNACHI).
Our representative, Walt Smittle, reported that you provided him a unique opportunity to participate in your electrical code seminar this past weekend in Baltimore, Maryland. We were extremely pleased to receive a full hour on your agenda and, on such short notice.
Your active and enthusiastic support of home electrical safety plays a crucial role in maintaining the arc-fault circuit interrupter (AFCI) requirement in new homes.
NASFM is a small organization involved in a large number of ambitions fire safety initiatives. Our ability to assist the state fire marshals in their mission to save lives depends on the combined commitment and strong involvement of both the fire services and groups such as the home inspectors in each state.
Once again, the Board thanks you for helping to initiate a relationship with InterNACHI and look forward to the many opportunities to partner for fire safety.
Congratulations and best wishes for continued success!
Sincerely,