I need a thermal image to figure it out.

Don’t let the cosmetic items throw you off.

Needs Better landscaping to allow water to flow away from the foundation .
No Power
Most likely will need a energy audit .
lololol

Missing caulk at the threshold. Plain as day.

The Finnigan pin appears loose where attaching to the goesinto. Recommend further evaluation by Murphy’s Law.

I recommend scraping loose paint and sealing all painted surfaces as they most likely contain lead.

All kidding aside, I am going to incorporate this photo into my defect recognition / report writing class.

The exercise will be NOT to write about something bad, but describe something GOOD in the photo.

I always take a photo of something horrendous, and challenge the students to observe and write something good.

It is truly an observational challenge, and a writing challenge. We then discuss what the students write. It’s fun, and truly educational.

I remember seeing this house in a movie…Phsyco?

Did the realtor tell her customer it is a fixer upper?

[quote=jfarsetta;754335I always take a photo of something horrendous, and challenge the students to observe and write something good.[/quote]

The grass is a pretty color.

Appears to have been built by a certified master builder from Tx. John was that the last home you built before graduating to inspector;-);-)

It really was a nice house until they had a big family reunion one day and a chili cooking contest. The next morning the photos shows what the house looked like. No one seems to know what happened.

NOTE: East Texas Rednecks cannot smell their own toots… To them, all that gas smells like roses…

Everyone had to move to the nicer part of town…

They made the move just in time to put up the Christmas decorations. 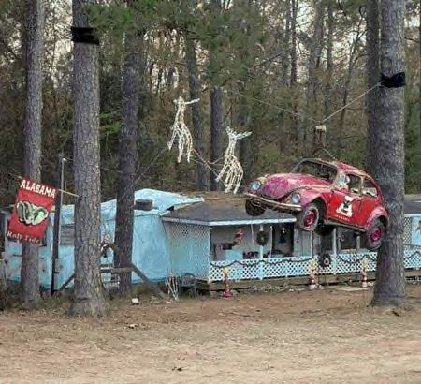 To save money, they have figured out a way to cook on the grill in the same location that they… well, you know what I mean.

Well, that is all the news I got for now from East Texas, where they even name our dogs “BUBBA”…

And… always remember, to us in the deep south, the term REDNECK is still considered a compliment to each other. Ya’ll come back and sit a spell when you can. We be havin a bowl of chili for ya, when ya come.

Nice house it really stands out.

Services must be underground for sure.

What is wrong? Anything to do with the pastel colors!