Many others have focused in on air sealing.
The owner could spend a little to save a lot, and maybe find the problem at the same time.
Hire a blower door consultant to pressurize (or pull vacuum) on the entire home and seal up air leaks. Bring a smoke pencil.

In THIS area if it’s blowing you have your culprit. Then regardless , have the consultant caulk all outside edges of the OSB to the framing. This is a legit method that’s used in new construction pretty regularly. Then use rockwool insulation as upgrade over fiberglass. Specify air sealed exterior outlets. Then, caulk the edges of the new interior drywall.

The air sealed outlets are hard to find.

Being as the home is in Orillia, ON, Canada, Orillio Ontario - Search (bing.com) which is surrounded by large bodies of water, I would lean towards a localized condensation issue. I believe the installation of vapor barrier on exterior walls has been required for some time in that area. Whether it be inside or outside, if moist air can get trapped behind the moisture barrier and insulation, well . . . 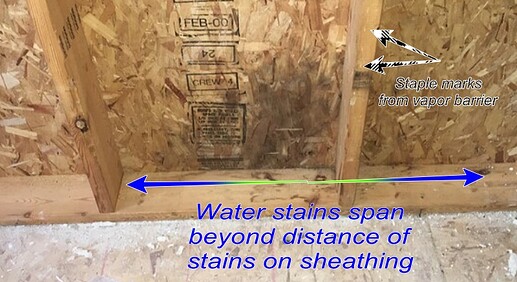 Since only the OP knows what the exterior looks like, and hasn’t provided much info to go on, then the evidence provided points to condensation as the suspect.

I see that the builder drilled drain holes in the subfloor.

I would think that if those holes were drilled for drainage during construction, then there would be more water staining than there is. The stains are quite localized and don’t appear to be beyond the framing. Just sayin…

There is the issue right there. The builder wraped minimally.
House wrap and felt paper.
[The Benefits of Asphalt Felt Paper](House Wrap Vs. Felt Paper: Which is the Better WRB

The Disadvantages of Asphalt Felt Paper

There are several important drawbacks to using asphalt felt paper as a weather-resistive barrier. Asphalt felt will tear if not handled carefully. It also tends to get brittle and deteriorate if left exposed to sunlight for long periods of time. Tears, rips, and cuts in the asphalt felt paper diminish its performance as a WRB by allowing air and moisture to enter the wall assembly.

Thanks for taking the time to review and offer suggestions to this home owner who is stuck fixing this mess.

Roger am I to understand from Your pictures that they used a house wrap on the exterior and plastic sheeting on the interior? If so we stopped doing that here a long time ago becaused it tended to trap moisture (condensation} insde the wall cavity…now Im not in Canada, but im just across the lake, Im thinking You would have similar issues there…

we stopped doing that here a long time ago

Don’t the codes call for vapor retarder for your climate zone (#6)?

on the exterior of the sheething only, there was a time they tried adding a plastic barrier also on the inside of the framing behind the drywall …that process was discontinued here because of all the condensation it created in the wall cavity…

on the exterior of the sheething only

Ohio’s current code (up.codes), why would the state adopt it: 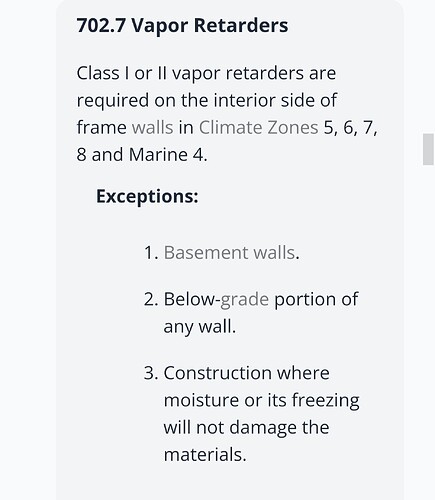 Simon I am talking about plastic sheeting over the insulation behind the drywall…I havent seen that used here in more tha 20 years because of the reasons mentioned. the way i see it here is house wrap under the siding craft faced insulation with the barrier facing in and then the drywall…the problem seemed to be the additional plastic over the insulation which is what the OP’s picture showed…you are not really this dense are You ???

Do they have a dog?

James, a polyethylene plastic sheet is a Class 1 vapor retarder, a kraft paper (the faced insulation you are referring to) is Class 2. If the local AHJ no longer allow Class 1 vapor retarder (yes, I’m well aware of the issues with trapping moisture inside an exterior wall), the state should amend the code and remove it from the allowed vapor retarders as I posted the code for. As far as being dense, that could easily be confused with a desire to understand. The code clearly states either Class 1 or 2 vapor barrier to be used on the interior of the wall (behind the drywall). A Class 3 vapor is allowed (but required in lieu of Class 1 or 2) depending on the exterior cladding. Thanks for your input!

Don’t be afraid of the codes, they exist for a reason. I know they scare some folks

As far as the OP’s issue, a million things could cause it, and my bet is it was not caused by the presence of a vapor barrier. When a vapor barrier is the culprit, majority of the wall looks the same as that isolated, small, spot in the OP’s pic. It is impossible to know what caused it from 500 miles away, especially without knowing exactly how the wall was constructed before the homeowner gutted it. It’s fun and all to play a detective but most of the posts are doing nothing but guessing, if we are to be honest. For example, there could easily be improper installation of the exterior cladding, causing that spot to get wet. What needs to happen is a consultation with a “local”, experienced, builder/contractor to evaluate the wall assembly and recommend on how to close it back up correctly so it does not cause any further issues instead of all the guessing.

Hi all. Homeowner here. Thank you for your kind replies so far, I really value all of your expertise.

They did have a dog but we don’t. Any holes in the floor seem to have been for TV cables.

Roger (reply 24) posted some pics I took of the house. In explanation:

I’ve taken a look under the siding at the house wrap where the black spot is, posted to the forum initially. The house wrap (there is a logo there, not sure if that’s a good brand or not) appears to be intact. You can see some scratches in in where the siding has perhaps contacted it but I’m not sure you could say it has holes. There are visible water droplets behind the wrap and you can see the black colour in the board.

I can’t see that the boards have been chaulked to the foundation sill. It’s probably unlikely but I couldn’t say for certain. The front of the house has a fascia which juts out over the sill in that typical early 2000’s raised bungalow style, and you can see there is no chalking at the base of the boards there. It looks as though the wrap has been tucked underneath the bottom edge of the boards. In some areas the siding has been chaulked to the foundation, although this is in the vertical and not along the horizontal base of the siding along the house.

Of note, there is water pooling in the J channels at the bottom of the siding.

I’ve also attached a picture of the other bedroom. There is a bolt and plate through the wall (holding up an external electric pole) which was soaking wet from condensation. I suppose because the metal is cold.

Additionally, the large patch of mould covering the entire wall in the corner of the main bedroom adjacent to the bathroom appears to be situated above the dryer exhaust pipe (red square).

The internal vapour barrier (a plastic sheet), remnants of which are still visible, has been stapled to the studs and not sealed in any way. Could this be a contributory factor? Should the boards be chaulked along their seams from the inside too?

I can take further pictures if required. I’ve ventured into the kitchen area and honestly, the wall looks completely fine! So I’m stumped.

Thanks all for any advice you may have. This in in Ontario, Canada

Of note, there is water pooling in the J channels at the bottom of the siding.

That may be leaking into siding seams and into the sheathing and beyond?

There, typically, isn’t J channel at the bottom of the siding except maybe at a deck or such. The first piece of siding is hooked into the starter strip that can’t be seen after siding installation. 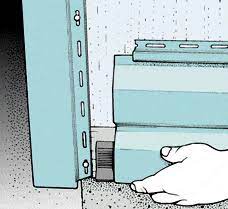 There are visible water droplets behind the wrap and you can see the black colour in the board.

The internal vapour barrier (a plastic sheet), remnants of which are still visible, has been stapled to the studs and not sealed in any way.

Is this on the warm side of the home, say between sheetrock and studs? Jim mentions it here.

on the exterior of the sheething only, there was a time they tried adding a plastic barrier also on the inside of the framing behind the drywall …that process was discontinued here because of all the condensation it created in the wall cavity…

Oh dear! What might this indicate? Please note I’ve taken off the insulation/vapour barrier to dry the wall out.

Is this on the warm side of the home, say between sheetrock and studs? Jim mentions it here.

I say plastic sheet- yes its a vapour barrier but likely a cheapo one so not one of the ‘breathable’ types. Construction was 2000.

I initially took off the lower half of the drywall and left the upper half as initiall I was looking at where the wiring was. As the lower halves dried out, I could feel moisture behind the insulation against the wall where I had left the insulation and drywall in place. So this suggests to my layman mind that it could be condensation… although perhaps nothing should be ruled out initially.
Thanks

So this could be a combination of issues- i.e. condensation and holes in house wrap?

Yes, it could be. However, I will caution you. We are virtually blind here and are just checking off some building science/envelope boxes. We have not really seen the big picture such as wall penetrations or fenestration etc. Climate zone is a also a big factor, for example I operate in a warm climate.

So, I think we have given you some deeper insight. I fear a more intrusive investigation is needed by a fairly sophisticated contractor. Starting with the best siding contractor you can find. You should be armed now with enough information to speak intelligently with whomever takes over from here. That’s my 2 cents.

Is anyone familiar with this brand house wrap? It looks “moisture soaked” or something to me. The rusted nail in the 2nd pic may be an indicator of excessive moisture. Did this house sit with just the wrap for a long duration before siding was installed possibly? 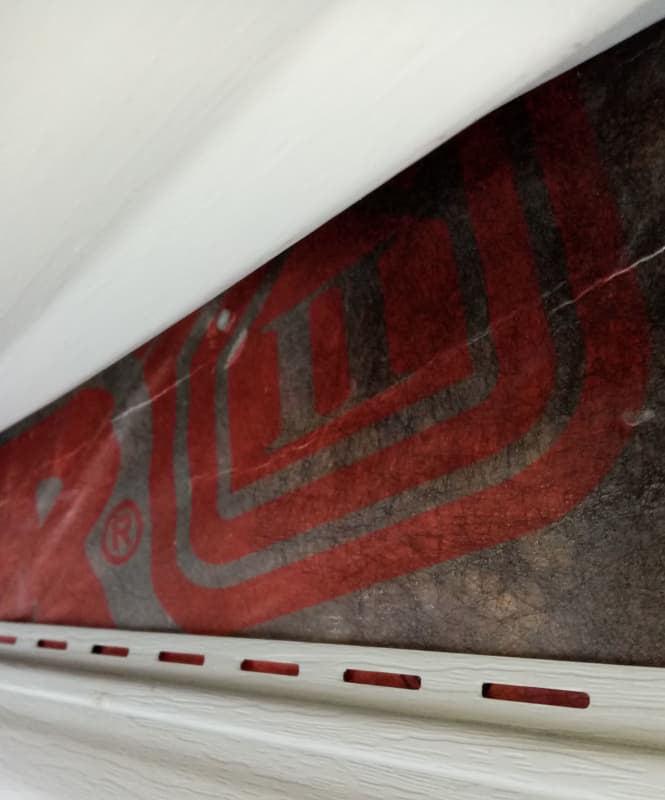 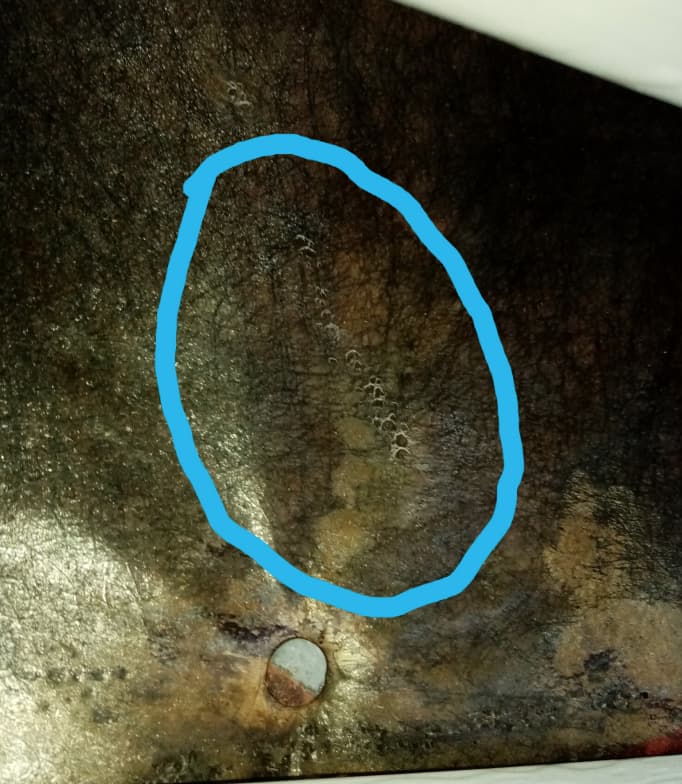