I was inspecting a home that had a finished basement and I was unable to access/probe the structure behind any of the paneling throughout the basement. Even though I have a disclaimer that states that my WBI inspection “is only a visual examination of all readily accessible areas of the structure”, I decided to access an un-paneled area of a small cavity in this basement and pull an insulation blanket away from it’s staples and viola, wouldn’t you know…massive Termite cakes.

This Termite finding would not have been discovered if I wasn’t so nosy. 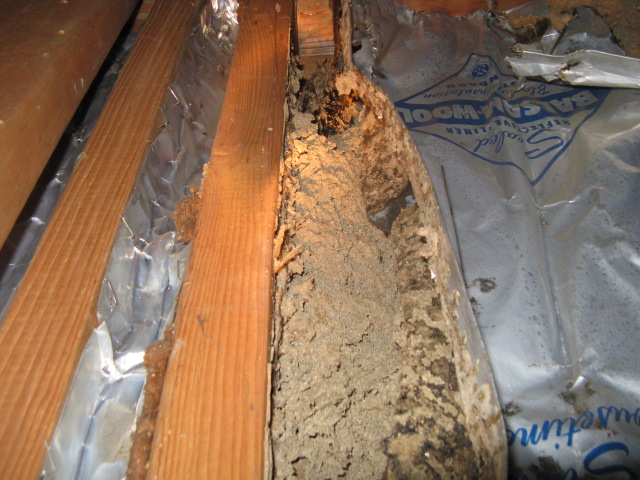 My clients were very thankful of this invasive inspection that I performed.

Did it show up on your Infrared inspection?

Did it show up on your Infrared inspection?

I was just being nosy and decided to pull this insulation away from the wall and discovered this big surprise.

I think if I found that in my house, I would pay the extra money for the IR inspection.

I think if I found that in my house, I would pay the extra money for the IR inspection.

The only way an IR scan would detect anomalies, would be if this home had A/C. No A/C installed, so I simply told my clients to get all the walls removed in this basement to determine the extent of damage.

The Seller’s Carpenter met with my Buyers yesterday and did determine that the Termite activity was indeed active and a treatment was imminent and the damage to the structure was minimal.