It was built to CODE

**‘The house fell down next door,’ says woman whose home was damaged **

A house collapsed early Tuesday morning in an upscale area of Toronto, causing damage to neighbouring property, and provincial inspectors have been called to investigate.

No one was inside when the home collapsed around 1 a.m. ET Tuesday on Rose Park Drive, near Mount Pleasant Road and St. Clair Avenue East. 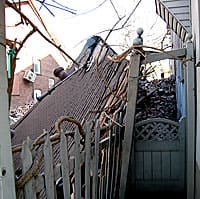 *Bricks, shingles and other debris fill the alleyway between the two houses on Rose Park Drive, near Mount Pleasant Road and St. Clair Avenue. *
*(Colin Butler/CBC) *
City of Toronto building inspectors aren’t sure what caused the collapse, but contractors had been working on the foundation.
Inspectors from the Ontario Ministry of Labour are handling the investigation.

Michele Forughi said the sound of the house next door coming down jarred her and her husband out of bed.

“What I thought, as I said to my husband, ‘Maybe the house fell down next door.’ And it was true,” Forughi said as she sipped a coffee and surveyed the damage to her home. 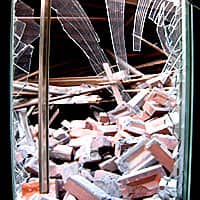 *The new view from Michele Forughi’s bathroom window. Bricks from a neighbouring house shattered windows in the kitchen and the bathroom early Tuesday morning. *
*(Colin Butler/CBC) *
Bricks shattered Forughi’s kitchen and bathroom windows. The power to her home was also cut.
Contractor Sam Atracs said there were no warning signs.
“No, nothing … mainly we [were] doing the foundation, not the upstairs. But we were lucky that this happened at night and there was no other workers in there that could have died, for sure,” said Atracs.
The city has ordered what’s left of the home pulled down.

Interesting. On Global last night the neighbour said something about a second floor being added to this house. Probably not intended to be a second floor, ground level “walk - in”!