Keeping ahead of the curve 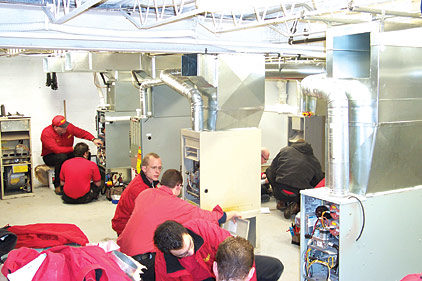 HVAC Educators Work to Keep Up on Advancing Technology

As technology continues to grow in the HVACR industry, educators are scrambling to come up with new ways to make sure the next generation of service technicians is equipped with the skills necessary to keep up with the current crop of techs.

As technology continues to grow in the HVACR industry, educators are scrambling to come up with new ways to make sure the next generation of service technicians is equipped with the skills necessary to keep up with the current crop of techs.
“It’s tough (staying ahead of the curve),” said Greg Goater, training and safety director, Isaac Heating and Air Conditioning, Rochester, N.Y. “In the old days, a furnace was a furnace. Even when [furnaces

http://contentcache-a.akamaihd.net/items/it/img/arrow-10x10.png](http://www.achrnews.com/articles/124618-hvac-educators-work-to-keep-up-on-advancing-technology#) developed, every manufacturer was using one of two or three different control boards, so even though there was a plethora of different kinds of equipment out there, they all were pretty much controlled the same way, so it wasn’t too difficult to do. Today, we have the manufacturers on their high-end equipment — it’s all data highways, not thermostat wires anymore, and it’s all proprietary stuff, so it’s extremely difficult to service a piece of equipment that you are not a dealer for.”
** Keep it Simple**

http://contentcache-a.akamaihd.net/items/it/img/arrow-10x10.png](http://www.achrnews.com/articles/124618-hvac-educators-work-to-keep-up-on-advancing-technology#) become more complex, many educators are making sure they go back to the fundamentals when it comes to training students and current techs.
Paul Reed Lovell, HVAC instructor at Chattahoochee Technical College, said many times it seems people want to shoot straight for the higher technology end of things.
“It kind of waters down the fundamentals and the basics,” Lovell said. “I’ve always tried to drill in the basics and then build up from there. It seems like with the students I come across, it helps to solidify that basis that they can fall back on.”
Norm Christopherson, senior training specialist, Johnson Controls Inc., said he’s had to make the transition from face-to-face instructing to teaching online classes

http://contentcache-a.akamaihd.net/items/it/img/arrow-10x10.png](http://www.achrnews.com/articles/124618-hvac-educators-work-to-keep-up-on-advancing-technology#), but one central factor never changes, and that’s the fundamentals.
“Students must learn the fundamentals and learn them well,” Christopherson said. “The physics of applied thermodynamics and electrical theory never change. Regardless of how complex our HVAC and controls systems become, they are all based on unchanging fundamentals. Heat flows from hot to cold, superheat and subcooling are essential concepts, and psychrometrics is important. The student facing a new and complex system with a problem will find his or her ability to apply a well-learned set of fundamentals is still the foundation of success in our industry.”
Christopherson added that, even after 40 years in the industry, he’s found his solid understanding of the fundamentals of things like electronics, basic applied thermodynamics, and basic math have been the key to understanding the most complex issues.
“The ability to apply that fundamental knowledge to new products and systems opens the door to remaining on top of our business, no matter how complex,” he said. “All new and more complex systems are still grounded in the basics. As I teach complex equipment, I find I often have to stop and review the fundamental concepts upon which they work before moving on to more advanced concerns or concepts.”
Jeff Taylor, liaison, It’s All About Q, a partner of Southern California Edison, said from his experience, he sees younger students being much more engaged than their older counterparts. “What we’re trying to do is get a marketplace transformation; we’re trying to change the attitude of the technicians in the field. We’re just having all sorts of problems getting technicians interested in their education,” he said.
“You have a lot of the guys in the field already saying, that’s not how you’re supposed to do it, so I would say the biggest problem is the ** attitude**. But what I’m finding with younger students, with smartphones and everything, is that they have a much more interested attitude.”
** Money Talks**

http://contentcache-a.akamaihd.net/items/it/img/arrow-10x10.png](http://www.achrnews.com/articles/124618-hvac-educators-work-to-keep-up-on-advancing-technology#) are huge. I know of programs running on next to nothing, and they have to rely upon donations of equipment because their dollars don’t stretch that far,” said Goater. “They’re going to have to have more support from the manufacturers and the manufacturer’s representatives.”
As often happens to be the case when it comes to the industry, location is everything. That’s the case for Lovell, who has been helped by Chattahoochee’s location.
“We’re kind of blessed in this area to be by LGand Mitsubishi’s training facilities in the Southeast,” he said. “Sometimes we get them to come in, and from there, you’re sparking the students’ interest and showing them this pathway. My biggest emphasis is grounding them in the fundamentals, yet showing them these avenues.”
Harold Nelson, technical support manager, Mingledorff’s Inc., said he feels the [trade schools

http://contentcache-a.akamaihd.net/items/it/img/arrow-10x10.png](http://www.achrnews.com/articles/124618-hvac-educators-work-to-keep-up-on-advancing-technology#) are doing the best they can to get the next generation ready, but he often hears about funding not being available for certain types of training.
Goater noted, when equipment isn’t available due to budgetary concerns, training is being done through electronic simulation, since it’s cheaper than purchasing equipment.
“I don’t know if that’s satisfactory, but that’s kind of the best you can do because it’s all you can afford to buy,” Goater said. “Part of it, too, is to not worry about the advanced stuff, because the people who come through the trade schools are entry-level techs, and they can be taught the basics and learn the more advanced stuff as time goes by.”
** Exclusive Club**