Never seen this before. Brand new Coleman Air Compressor and Air Handler (March 2021 manufacture date, 410A Coolant). Compressor is 42,000 BTU, and the Air Handler is 24,000 BTU. Is this a problem? 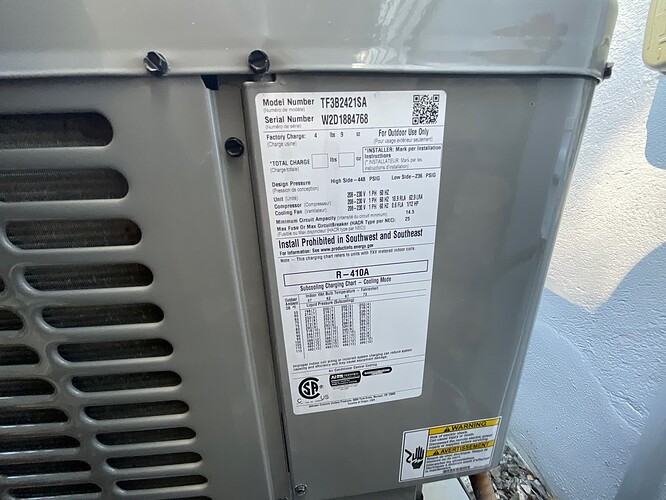 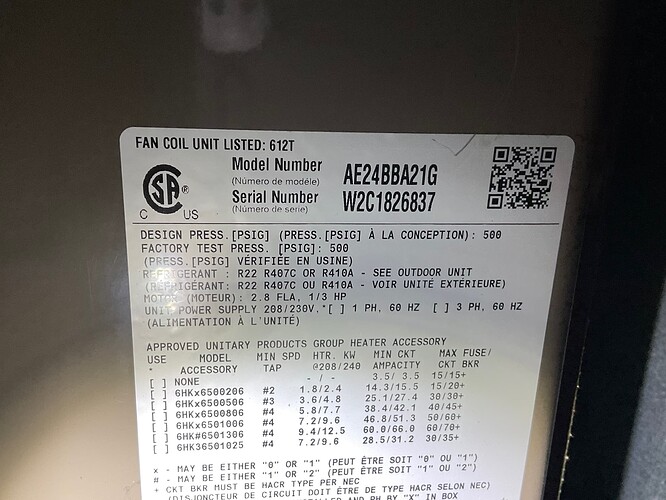 No need to delete. It was helpful to me for looking up how to date a Coleman unit. Now I know if I come across one.

I think I need to get my eyes checked

All you need to do is verify proper operation with the thermostat.

IV. The inspector is not required to:
A. determine the uniformity, temperature, flow, balance, distribution, size, capacity, BTU, or supply adequacy of the cooling system.

They are both 2 ton units

Excerpt from the exterior unit manual 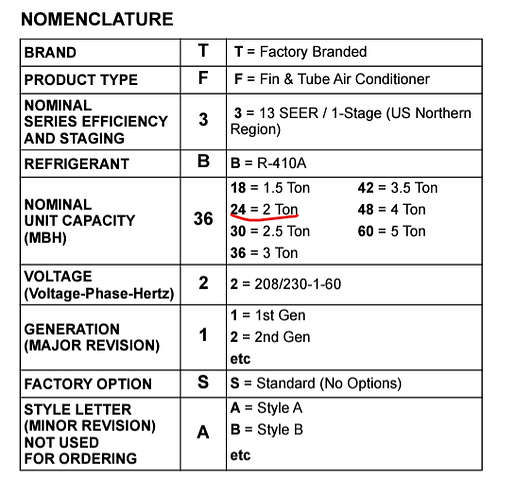 All you need to do is verify proper operation with the thermostat.

IV. The inspector is not required to:
A. determine the uniformity, temperature, flow, balance, distribution, size, capacity, BTU, or supply adequacy of the cooling system.

I do agree with you Robert and on most occasions I do not exceed the Standards when it comes to this subject. With that being said, I come across situations quite often where I feel my clients need to know more than just whether the equipment was functioning.

I’m curious to know how other inspectors would deal with and report on a certain situation I run into quite often.

For some reference, I live in Indiana where we experience fairly cold winters (single digits and teens) and fairly hot and humid summers (high 80s with 70% to 90% humidity levels).

I inspected a home earlier this year in July. When I arrived at the home, the outdoor temperature was 88 degrees with 84% humidity.

The listing stated the home was built in 1996, Ranch style and had 2,600 square feet of living space with a detached garage.

Immediately upon arriving at the home, I determined that the home originally had an attached garage on the front of the home but had since been converted to a family room/game room area. There was a detached garage built on the side of the home which is irrelevant for the purpose of this scenario.

While we were in the home, my clients (buyers) kept on commenting on how cool the house was and how they were glad this home had central air conditioning because their current apartment only had a window air conditioning unit and they were tired of being hot (managing client expectations???).

The home had a Rheem air conditioning unit that was manufactured in 1996 and was a 2.5 ton unit.

The home had 2 x 4 exterior walls and had approximately 8" of loose fill cellulose insulation in the attic which is considered low for this region of the country.

When I tested the operation of the air conditioning unit I turned the thermostat to 60 degrees. The unit responded to thermostatic controls and energized and cold air was noted at all register locations. I left it running for over an hour but the temperature did not drop one degree. It was still 64 degrees when I turned the thermostat back to 72 degrees.

More Information: The unit was not low on refrigerant.The HVAC contractor who evaluated the system later stated the unit was fully charged.

Hopefully I have given you enough information. I would like to know what everyone thinks and how you would report on these findings.

Was the AC on and cooling? If so, the thermostat was out of calibration or faulty. I would turn the t-stat to a couple different settings to include off to determine if the t-stat was responsive.

Oh yeah. I left an important piece of info out. I will edit my comment and give you more information.