Nail or rivet for straps

I did get a pic of the other side. The nails are just for the bracket not the strap.
The other side has only one nail - it is very clear in the pic I took.
I thought that the first nail at the bottom of the picture attached was just a rivet into the metal piece.
Nail head (or rivet head) is smaller than the one at the top.

Can any one else chime in here. Curious to know what you guys do?
Thanks

There are only a total of two nails - one on either side. My understanding is that in the picture provided (which is the front of the strap) the bottom nail is not a nail but in fact a rivet and does not count. I am trying to find out if this is actually the case with these straps.
That being said, if this is true, then would this not be written up as a toe nail because it does not even meet the clip requirement of 3 nails.

I have attached another picture from today. As you can see the two nails are rusted but the bottom “nail” is not - is the bottom one a rivet and therefor does NOT count? 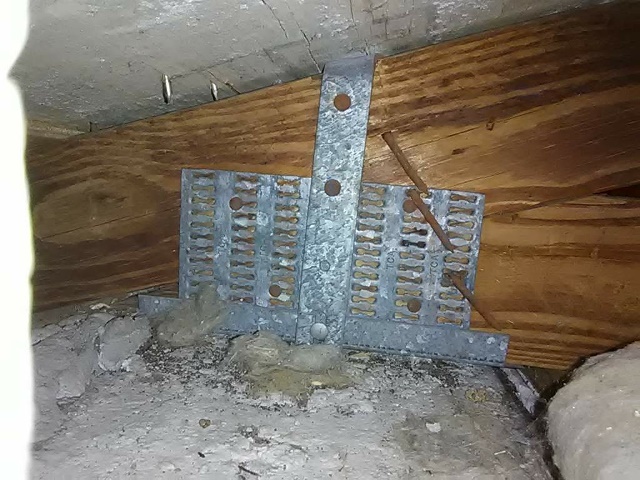 Hi all
I am curious as what you guys would write up for the strap in the attached picture. It has 2 nails on the front however I was told that the bottom one is not actually a nail and is a rivet so it does not count as meeting the requirements for a wind mitigation. Is that correct?
Thanks in advance.

Yes, that is correct. Minimum of 3 nails or no credit.

I was taught that the rivet which holds the bracket to the truss does not count as a nail. In this picture that would mean that you have 2 nails only.
Do you see the bent over nails coming through from the other side (3 of them)? Well, that’s an indication that that you probably have 3 nails holding the strap from the other side.
Chances are that, if you go over to the other side (opposing side of the truss), you’ll see only 2 bent nails. If you see 3 (which would include the bracket nail), then you could probably count it as 3. But chances are you’ll only see 2 bent nails.
This tecnique only works with older longer nails. The newer nails are usually only about 1.5" long (even the #10s) and will not come through.

If there is only 1 nail per side, then it is toe nail. There are 2 types of toe nails (in the form). One is an actual toe nail, while the other is a strap that does not qualify as either a clip or single wrap.

The “weakest” roof to wall connection.
Picture one in this thread meets that definition.
With only one nail on the front side, any other straps observed do not matter.
No credit…

Thank you all for your replies. Just as I suspected - glad I am on the same track but wanted confirmation from all of you.
So here is the “straps” in question. Pictures are from both front and back.
As you can see on the two front sides of the straps there are two nails, however the bottom nail goes through the metal like a rivet.
The rear sides of the straps have a nail.
So my question is based on what you guys can see, does this make it a toe nail due to the fact that there is only one nail on the front and on one of the straps a total of only 2 nails and not 3?
Or do I give them the credit for the strap as the bottom one is a nail and not a rivet?
Also aren’t some of those nails you see bent over from the nails going through the joist connectors? 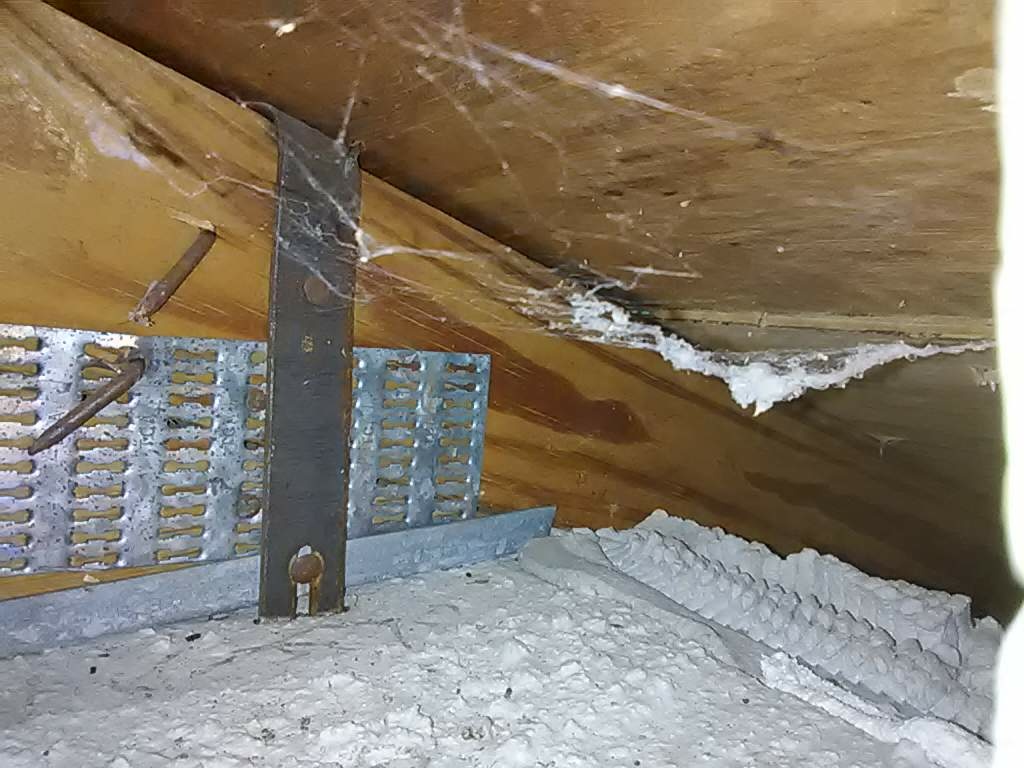 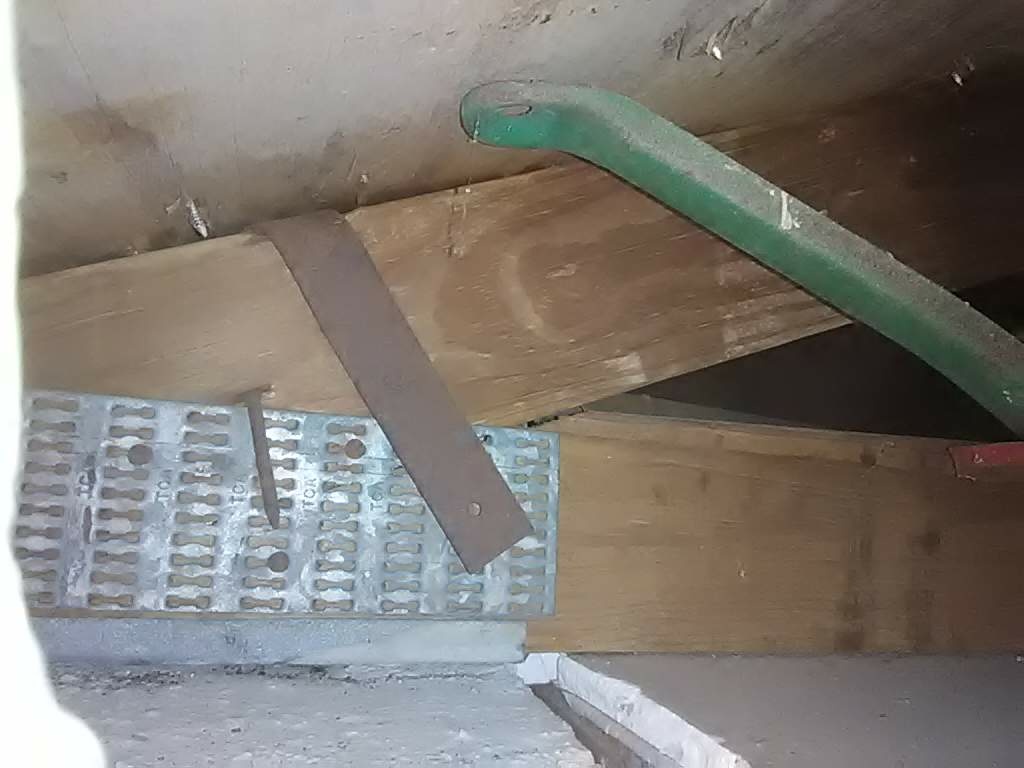 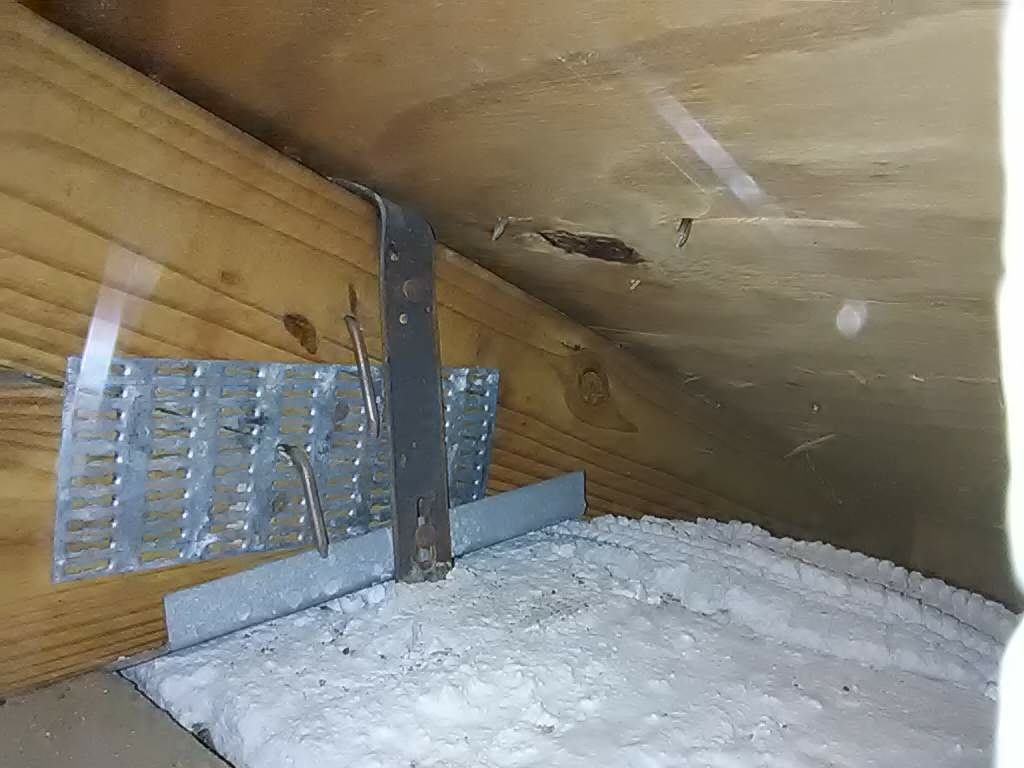 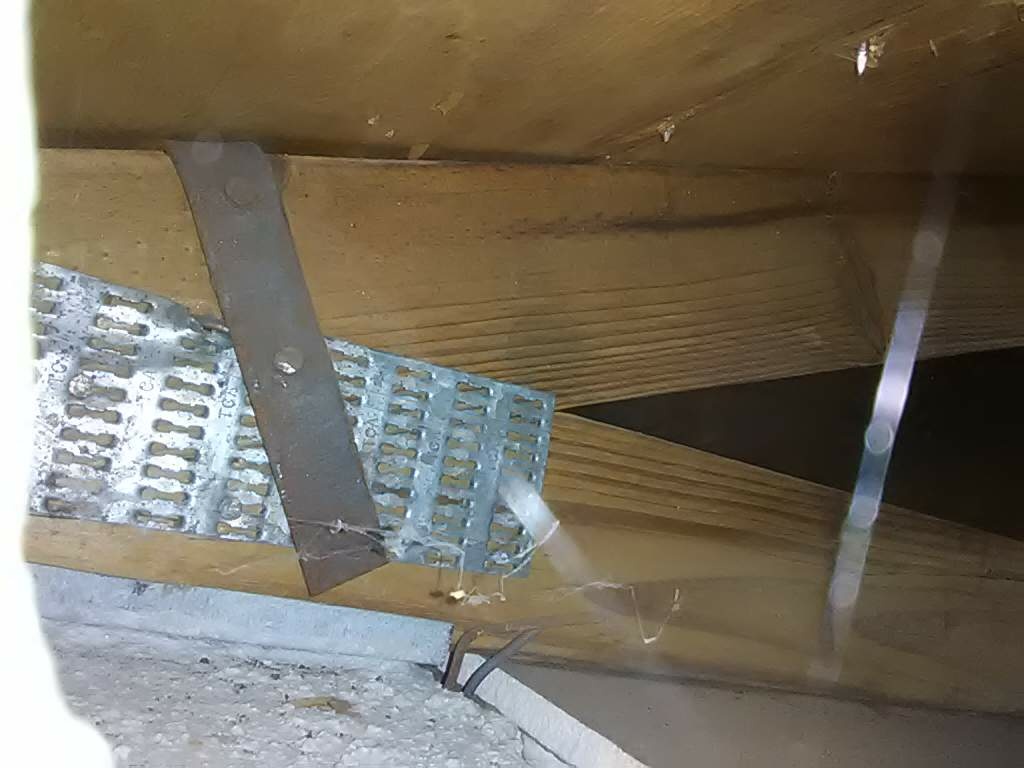 The first thing you need to learn, is you can’t mix and match pictures.
The original picture in this thread, has one nail on the front side.
That eliminates everything but a clip, on the form.
One nail on the back side, equals two total nails.
Remember, the “weakest” form of connection applies.
That equates to a toe-nail on the form.

I would suggest you take, or retake the wind mitigation course at NACHI.

This is a fairly easy assessment…

Of coarse, we are assuming that the pictures of the straps comply with: Do not include attachment of hip/valley jacks within 5 feet of the inside or outside corner of the roof in determination…

Eric – I am not mixing pictures. The first picture is the same as the last pictures except I added the back of the strap. I also added another front and back picture which indicates that there are not enough nails. I wanted advice on what others were doing as the bottom nail in my experience (and others) is in fact a rivet.

However some have indicated that the bottom is sometimes a nail and hence the client is given the credit.

I was asking for advice on these particular straps as the insurance company came back stating that the client was previously given the credit for a single wrap.

The “weakest” part in this instance shows that one of the straps does not have 3 nails so it cannot be a clip either and therfore is a toe nail - some have indicated that the bottom one is a nail and not a rivet therefore it would be strap.

As for the wind mitigation course – I am quite familiar with it and don’t need to retake it. I am simply asking others for their advice and what they have done in the past.
I assume that you have never had an issue or run into a situation where you asked others for advice or help?

I assume that you have never had an issue or run into a situation where you asked others for advice or help?

While I won’t speak for Eric, the issue may be likely that you are reluctant to be confrontational with the owner or insurance agent, as you mentioned the previous wind mitigation inspection’s rating. I have been told that same thing, or similar, by many agents, but it doesn’t change what I observed in the attic.

Yes, your issue appears to have some confusion, but the nail or rivet issue comes down to your judgement call; after-all, it’s your phone that will ring if the underwriter disagrees after reviewing your report & photos, not anyone else on this board. That rivet doesn’t have any protruding nail shank on the other side of the truss, FWIW.

The rules or conditions on the form are actually fairly straight forward, and many inspectors tend to over think the process. We’re not there to “give credits”, only to verify construction details. (There are many companies that specialize in adding the 3rd nail to homes that have only 2, for example. It’s that common of a find, in many areas)

Dominic – I appreciate your reply. I stand by my reports and have no problem telling that to the insurance agent.
My only concern is that the customer gets whatever credits are due – if it doesn’t meet the requirements then so be it.
And yes, I do know of companies that add the third nail for these clients, I have seem them doing it. They are quick and charge a lot.
I know this one seemed a little confusing and that is why I was asking what you guys would do or have done as I have not had this issue before.
I appreciate all your feedback.
Thanks 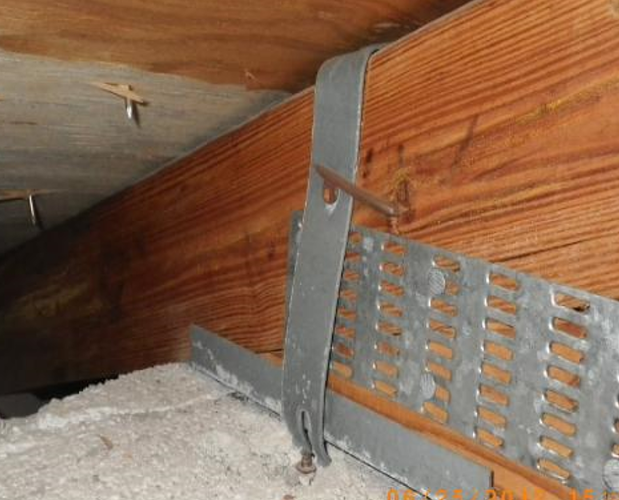 rivet failure941×759 620 KB
Good Evening Stuart
To your Original question. yes that is not a Fastener. it is a Rivet that holds the strap and moisture barrier together. This should not be counted as a nail. This strap shows one nail on the anchor side. Attached is an example of where a similar connector broke and the rivet fell to the side.
Matt
1 Like
szimmelman (Stuart Zimmelman) July 7, 2020, 1:17am #21

Matt - thank you for answering the original question and the clarification – appreciate it.

I assume that you have never had an issue or run into a situation where you asked others for advice or help?

It would be suggested that you do not assume…
Normally, I would do a search of this forum first…

Hi Guys, Strap comes up from bond beam but does not wrap over truss. It has 2 nails threw metal strap and truss, at the bottom there is a rivet to metal plate of bottom of truss.Does the rivet give it a clip title or the rivet has no value and its considered toe nail because there is only 2 nails… . Thanks, John

Then, I might do some research on my own.

In any event, as indicated in the post I cited above…from 6 years ago states, it is a rivet.
If there are only 2 nails total, as you stated in posts 3 & 5, then it is a toe nail on the form.
The first two pictures in post 14 show only one nail.

When was this home built?
It looks like many of the homes built in the 80s most notably in Coral Springs…which used the “nail the straps depending on mood method”.