Nothing will convince them Michael. It is a belief system, a religion, and no manner of, or number of facts will ever defeat a belief.

I see Brian on line now. Maybe h is thinking of an answer.:shock:

With regard to this link posted earlier: minimal and decreasing annual sea level rise

You have to woander how the folks at The National Resources Defense Council and ABC news come up with this story.

An Iditarod without snow, Florida’s coastal towns lost forever to the Gulf of Mexico, wheat farmers in Kansas without crops.

A undated photo from the Center for Northern Studies shows the Ward Hunt Ice Shelf disintegrating.

What sounds like the climatic end of days could be coming a lot sooner than previously anticipated.

A recent report released by the U.S. Geological Survey paints abrupt climactic shifts, including a more rapid climate change with global sea level increases of up to four feet by the year 2100 and arid climatic shifts in the North American Southwest by mid-century.

A little snow and I mean little probally can handle its the ice that makes walking on the roof a little hard, have to put on my football cleats. This has been a crazy winter here a foot of snow on the last day of November and now this ICE. Haven’t lost power YET but have the old generator just waiting in case the lights go out.
</IMG>

CMON… football cleats?? are you serious?

Maybe with this cold snap these glaciers will freeze up agin.

Maybe with this cold snap these glaciers will freeze up agin.

Photos like these can easily be “touched up” thesd days by the commie envirowackos to make everything look like all the snow & ice is melting. There really is no global warming…God (ML) told me so!!

Photos like these can easily be “touched up” thesd days by the commie envirowackos to make everything look like all the snow & ice is melting. There really is no global warming…God (ML) told me so!!

I know facts have a way of irritating you so here is another one.

After 2 centuries of shrinking, Alaska glaciers got thicker this year

Earth to Brian M., Glaciers have been shrinking since the end of the little ice age.:roll::roll:

Brian excelled at one game in kindergarten; “Follow the Leader”.:roll:

Exclusive: Scientists warn that there may be no ice at North Pole this summer](http://www.independent.co.uk/environment/climate-change/exclusive-no-ice-at-the-north-pole-855406.html)
Polar scientists reveal dramatic new evidence of climate change
By Steve Connor, Science Editor
Friday, 27 June 2008

It seems unthinkable, but for the first time in human history, ice is on course to disappear entirely from the North Pole this year…

And now for something completely different.
**
Sea Ice Ends Year at Same Level as 1979**

Ice levels had been tracking lower throughout much of 2008, but rapidly recovered in the last quarter. In fact, the rate of increase from September onward is the fastest rate of change on record, either upwards or downwards…

How embarrassing is it when you produce a horror movie based on global warming and when the time comes to release it, the planet is experiencing some of the coldest weather in decades?

Such is the case with The Thaw starring Val Kilmer. Filmed in Canada last summer, it should be ready for release by now but even though the trailer has been produced, no specific release date has been announced.

Perhaps the producers realize how much of a laughingstock this movie would become if a movie based on the premise of global warming were released when their potential audience is freezing.:shock:

Chicken little says Obama must act now to avoid catastrophe.
President ‘has four years to save Earth’ US must take the lead to avert eco-disaster
Read the full interview with James Hansen here](http://www.guardian.co.uk/environment/2009/jan/18/obama-climate-change)

Barack Obama has only four years to save the world. That is the stark assessment of Nasa scientist and leading climate expert Jim Hansen who last week warned only urgent action by the new president could halt the devastating climate change that now threatens Earth. Crucially, that action will have to be taken within Obama’s first administration, he added.

Soaring carbon emissions are already causing ice-cap melting and threaten to trigger global flooding, widespread species loss and major disruptions of weather patterns in the near future. “We cannot afford to put off change any longer,” said Hansen. “We have to get on a new path within this new administration. We have only four years left for Obama to set an example to the rest of the world. America must take the lead.”

Hansen said current carbon levels in the atmosphere were already too high to prevent runaway greenhouse warming. Yet the levels are still rising despite all the efforts of politicians and scientists.

Looks like the public gets it. Now if we can just get the politicians to listen.

As Barack Obama takes office, the public’s focus is overwhelmingly on domestic policy concerns – particularly the economy. Strengthening the nation’s economy and improving the job situation stand at the top of the public’s list of domestic priorities for 2009. Meanwhile, the priority placed on issues such as the environment, crime, illegal immigration and even reducing health care costs has fallen off from a year ago.

Attention all Americans…turn off your lights…park your cars…and put out those fires! The planet is depending on us…besides, we don’t have jobs, money or anything to manufacture! Do your part…for the good of China, India and South America.

No matter what that is funny 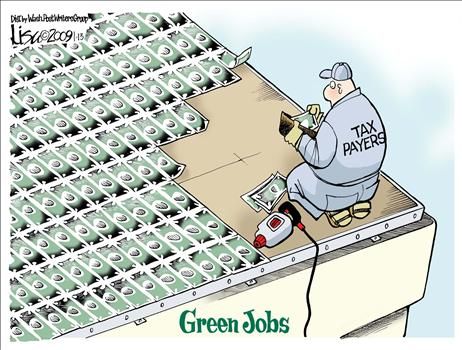 THREE senior Japanese scientists separately engaged in climate-change research have strongly questioned the validity of the man-made global-warming model that underpins the drive by the UN and most developed-nation governments to curb greenhouse gas emissions.

It could take 10 to 20 years more research to prove or disprove the theory of anthropogenic climate change, said Dr Kusano, a research group leader with the Japan Agency for Marine-Earth Science’s Earth Simulator project.

“Before anyone noticed, this hypothesis has been substituted for truth,” writes Shunichi Akasofu, founding director of the University of Alaska’s International Arctic Research Centre…

Dr Maruyama said many scientists were doubtful about man-made climate-change theory, but did not want to risk their funding from the government or bad publicity from the mass media, which he said was leading society in the wrong direction.

Even if we stop all release of CO2, it will still be in the atmosphere, because of this.

You just can’t make this stuff up. More not in my back yard syndrome.

**WASHINGTON - California’s Mojave Desert may seem ideally suited for solar energy production, but concern over what several proposed projects might do to the aesthetics of the region and its tortoise population is setting up a potential clash between conservationists and companies seeking to develop renewable energy.