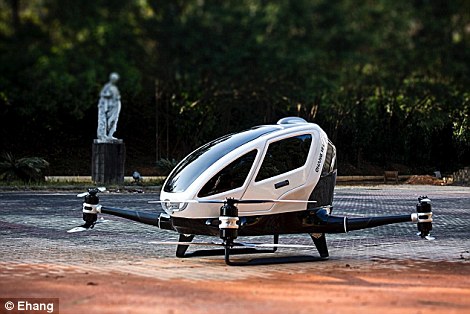 No provision was made to fill out your last will and testament before you hit
the fly button.

No provision was made to fill out your last will and testament before you hit
the fly button.

I wonder if that is impact laminated glass in case one of those blades fly off like a boomerang.:shock:

I need to get a more compact and lighter ladder. I WANT ONE NOW

I hope they have a 2 seater so I can bring my Daughter or Wife.

I hope they have a 2 seater so I can bring my Daughter or Wife.

Good thing it doesn’t fly, it would be dangerous.

Good thing it doesn’t fly, it would be dangerous.

The flying drone allows you to set the destination and it does the flying for you. What could go wrong?

A Chinese drone maker has unveiled what it says is the world’s first personal autonomous aerial vehicle (AAV) — a drone capable of carrying a human passenger.
EHang Inc presented the drone at the Consumer Electronics Show in Las Vegas on Wednesday.

The EHang 184 AAV is intended to be a low-altitude drone, flying short- to medium-distances.
“Due to the 184’s fully automated navigation, made possible by EHang’s 24/7, real-time flight command center, passengers have no need for a pilot’s licence — they simply sit back and let the drone take over from there,” the company said in a news release.
The electric-powered drone stands 1.5 metres tall, weighs about 200 kilograms and can carry up to 100 kilograms. The company says it is designed to be able to fly a single passenger for 23 minutes at sea level at an average cruising speed of 100 km/h.

The view from inside the EHang 184 autonomous aerial vehicle at the EHang booth at CES International. (John Locher/Associated Press)
The single passenger would be able to input commands on an attached tablet console. The cabin is equipped with air conditioner and Wi-Fi internet. With propellers folded up, the drone is designed to fit in a single parking spot, EHang said.
The new reality of human passenger drones will certainly raise issues with regulatory bodies.
Just this week, Transport Canada said that the department will be implementing tougher regulations for drones, although passenger vehicles weren’t mentioned.
Currently, Transport Canada’s guidelines say drones should be flown at least nine kilometres away from airports, no higher than 90 metres above the ground and at least 150 metres away from people, buildings and vehicles.
The department can issue fines of up to $25,000 for improper use of a recreational drone, depending on the circumstances, such as whether a drone user is “wilfully violating airspace” or posing a threat to an aircraft trying to land.