T’was the night before the World Series, and throughout Cardinal Nation, fans dreamt of homeruns and standing ovations.

Jerseys were hung in the lockers with care. The year’s Fall Classic, soon, would be there.

Nyjer Morgan was restless and rolling in bed, grudgingly eating the words he had said.

Carp slept in cleats, and Freese in his cap, while some players struggled even to nap.

The Phils had the pitching. The Brewers, the batters, but as of that night, none of that mattered.

The Redbirds gave them a run for their cash, And took them each out like a week’s worth of trash.

Some fans felt some guilt, for two months ago, they took their towels and gave them a throw. “The Cardinals are finished and I have great fear; we may have squandered Albert’s last year”.

But the Cardinals not once believed they’d been licked. They made up some ground and made it up quick.

With heart and resilience, the great comeback came. The season hinged on its very last game.

So Albert, and Lance, Allen and Jay, and all of the Cards, except Holliday, delivered a win in game 162, then waited to see what Atlanta would do. Their collapse was completed on that very same night. While booze filled the air, Redbirds cheered, “Happy flight!”

Most fans regret their early surrender, but this is a lesson they’d surely remember.

One test remained; a club called the Rangers. To World Series baseball, they were no strangers.

T’was a perfect year to get number 11, and bring the trophy back to baseball Heaven.

Behind soccer and hockey, too name a few.

Soccer might be worse, but at least someone is moving around. I could fix up baseball if they asked me to. First thing I’d do (besides the pitch clock) is I’d allow blocking between first and second base… let’s play like men. Next, I’d make a rule that expels for one year, any manager who interrupts the entire game and all the fans, and players, and advertisers, and camera crews, etc, by shamelessly walking out onto the field to have a chat… no, better yet… expelled for life. Then I’d outlaw all that spitting. Unless you are doing something physically rough like ranching on horseback, you don’t need a chew, girl.

And another change I’d make: Let’s keep it real, even the most die-hard, lobotomized fan probably can’t suffer through more than 20 games a season. So let’s have a 25 game season. That’s about 24 games, 8 innings too much but we want to make sure everyone gets their fill.

I should be the baseball Commissioner.

I miss the good ol days of the Big Red Machine.

The 75 world series was the best of all time. At least in my mind. 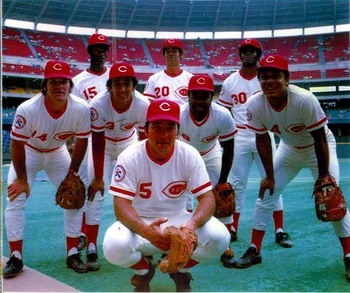 2 Down!
Cards 16
Rangers not enough

You could look it up.

Counselor, your argument relies on the testimony of someone who is paid (“sportswriter”) to hopelessly try and make paint drying, ooops I mean MLB, exciting.

If you think tonights game (6) was boring you have some big time issues.

Baseball reminds me of Bowling, or Tennis…bores the hell out of me too…:margarit:

Baseball is not meant to be watched on tv. To truly enjoy the game, it should be done in person, on a warm summer afternoon / evening with cold beer, hot dogs/sausages, and a bag of peanuts. No fancy schmancy garlic fries or pizza or sushi. Get seats along the sunny side, even with either 1st or 3rd base about 4 or 5 rows from the field. It cannot be an indoor stadium. It must be outside with natural grass.

I really enjoy spring training in Arizona. 2 games a day for a week at various stadiums. Nothing like the outfield grass berm in Peoria on a hot spring day.