Oklahoma is so hot that street lamps are melting

Sure hope Charley has his Red Hat on and staying inside.
Keep the horses cool there buddy.
That is after you take care of the Commander. 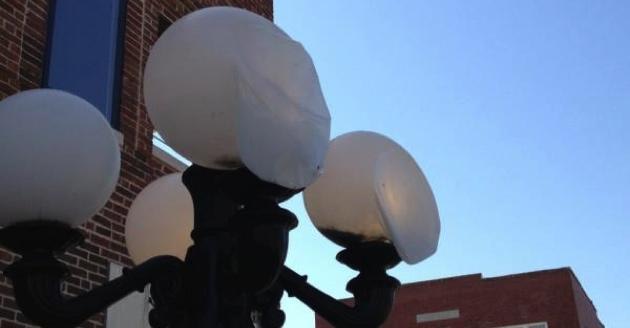 of 115 degrees are taking its toll on the nation’s heartland
It’s hard to not be concerned with global warming when its effects are right in front of your eyes. Sure, it’s one thing when the ocean begins to reclaim islands, but when you can see the effects in your home town, well, that’s another story altogether. Case in point: KFOR TV in Stillwater, Oklahoma is reporting that temperatures are so high that the street lamps have begun melting.
To be sure, Stillwater is suffering from one heck of a heatwave. It’s expected to reach 115 there today, 108 on Friday, and 109 on Saturday. And warmer temperatures are nothing new: July represented the 23rd month out of the last 28 that came in warmer than average.
It’s possible the heat itself isn’t responsible for the event — it’s being reported on Facebook that a nearby dumpster fire may have been the cause of the melting plastic light housings. Still, that dumpster fire was caused and aggravated by the record heat and dryness. And if dangerous, spontaneous fires aren’t reason enough to go green, we don’t know what is.
[Image credit: Patrick Hunter via Facebook]

Ya gotta spare bedroom I am about ready for a cool:cool: break its been 112 or better every day this week