One of the things that is great about this country

We all know that we live in a deeply flawed and conflicted country, but I like to look for the good things while observing the bad as well. I have attached an article that I think speaks to this.

This man was a bonafide hero who helped save his fellow soldiers and he was denied The Medal of Honor due to his ethnicity for many years.
The “mistake” was finally corrected and he received the Medal of Honor.

While it’s sad that he was denied it due to essentially racist attitudes it was corrected finally.
And that is something that is great about America, that we can sometimes acknowledge our errors, oversights and biases and finally try to overcome them.

Santiago Erevia, a Vietnam War veteran and retired mail carrier who had been denied the nation’s highest military honor for 45 years because he was Hispanic, died on Tuesday in San Antonio. He was 69.

The cause was a heart attack, said his wife, Letica Lopez Erevia.

Mr. Erevia, who single-handedly wiped out four enemy bunkers while his comrades lay wounded, said years later that after his heroics had been made known a fellow soldier was asked to draft a citation for the Medal of Honor, the highest military award.

Instead he received the Distinguished Service Cross, the nation’s second-highest award for valor. Mr. Erevia long believed that he had been denied the Medal of Honor because he had survived the firefight. (In fact, recipients are frequently still alive when given the award.)

But a 12-year Pentagon investigation, mandated by Congress, of discrimination in the awarding of the Medal of Honor came to a different conclusion: that the heroism of Mr. Erevia and 23 other Army veterans of World War II and the Korean and Vietnam wars — most of them Hispanic — had been undervalued because of their race, religion or ethnicity and thus denied the medal unjustly.

That wrong was rectified at a White House ceremony in March 2014, when President Obama awarded the medal to the 24 veterans. Mr. Erevia, in his full dress uniform, was one of three men on hand to receive the honor. The 21 others had not lived to see the moment.

His heroics took place on May 21, 1969, near Tam Ký City, a coastal town south of Da Nang in South Vietnam. Sergeant Erevia, a radio telephone operator with the rank of specialist fourth class, was part of a company that had breached the enemy’s defensive perimeter near the town and was continuing its advance. Mr. Erevia was delegated to stay behind and treat the wounded.

When he and his half-dozen wounded comrades came under heavy fire, however, he gathered their weapons and, after a companion, Patrick Diehl, was shot, charged four enemy bunkers armed with hand grenades and two M-16 rifles.

He “fought his way to the final bunker, running and firing both M-16 rifles simultaneously, and killed the fortification’s defender with point-blank fire,” according to the official citation, “then returned to the soldiers charged to his care and resumed treating their injuries.”

Santiago Jesus Erevia was born in Corpus Christi, Tex., on Dec. 15, 1946, the son of a laborer, also named Santiago, and Raphaela Erevia.

As a boy, he picked cotton on a farm near Nordheim, a tiny town between Corpus Christi and San Antonio. He excelled in math in high school but was persuaded by his father to drop out when he was a sophomore so that he could go to work.

When he was 22, working as a cook and going through a divorce, he decided to volunteer for the Army rather than wait to be drafted. He also saw the military as an opportunity to further his education.

On his second day in Vietnam, he recalled in an interview with NCO magazine, “we were in line, and maybe 200 or 300 yards from where I was, one guy stepped on a mine, and his boot landed about 10 feet from where I was.”

He earned the nickname Mr. Lucky for escaping injury.

Mr. Erevia left active service in 1970, served in the Texas National Guard for 17 years and retired from the United States Postal Service in 2002.

In addition to his wife, he is survived by three sons, Jesse Edward, James and Roland, and a daughter, Rosie. 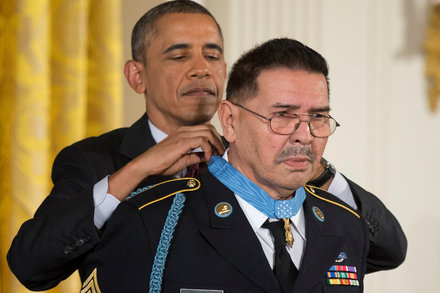 Santiago Erevia, Once Denied Medal of Honor Over Ethnicity, Dies at 69

After a Pentagon investigation, Mr. Erevia, a Vietnam veteran, was eventually bestowed the nation’s highest award for valor by President Obama in 2014.

You found a good thing amongst the not so good, Thomas. Thanks for sharing it with us.

The Man deserved the Honer and I greatly respect him and thanks for reminding us all that Americans come in all shapes and colors and beliefs.

Obama should be in jail for doing so many other things to ruin our Country. Yeah he did something RIGHT for a CHANGE.