House today had oxidation on breakers, I believe this to be a concern but can’t find anything looking for info. What would cause this? House is 2000 built with 100amp service. Have photo’s hope that might help

By oxidation do you mean the small amount of white powder on the breaker #2 in photo 2?

By oxidation do you mean the small amount of white powder on the breaker #2 in photo 2?

Or on the screws? It looks like he chipped some off of 2nd one down.

Hi guys, mostly on the screws, I didn’t touch anything in there, what you see is what you get.

Hey Mark. Only time I have encountered Oxidization on breakers like that was some time ago and the breakers were marked coalm I believe. Turned out they were certified to be used in mixed copper and aluminum branch circuits. Aluminum components in the breakers caused some visible surface corrosion/ oxidization. The breakers I saw then were marked but the markings in photo may be covered with the breaker circuit id. I can’t tell from photo. Worth looking for anyway, contractor may have had some older breakers to use up.

Thanks Bruce, it is copper wiring so it could be the breaker itself is coated causing the problem.

I pulled out some GE breakers and found an older one (left) and newer one (right) which both have a substance covering a screw that seems to hold together some of the internal components of the CB. The white or black stuff is injected into the Phillips slot to keep someone from tampering with the screw. 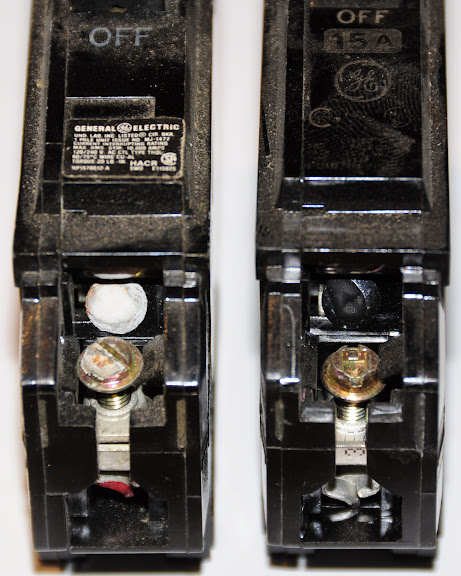 The second photo shows the CB with the white stuff removed with a screw driver. IMO even if it’s removed, either intentionally or if it simply fell off it shouldn’t alter the safe operation of the CB unless someone tried to play with the screw. 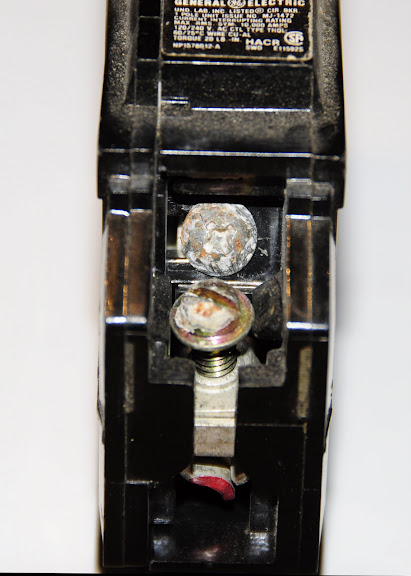 Thanks Robert!!! great photo’s and explanation, that is exactly what I saw. You guys are great! Until next time, Mark