I wonder if somebody still has their left arm----:ack!:

We’re all ready to go on vacation. Let’s just stop by the ATM and grab some cash…:shock:

Do you know how tall your rig is?

ive seen this video before, the caption there claims he was killed…not a nice video

ive seen this video before, the caption there claims he was killed…not a nice video

Not True, here’s the story and a couple closeup photo’s
*At approximately 3 PM, Tuesday, July 2, a 2008 Dodge Ram 2500, pulling a new travel trailer, hit the corner of the Texas State Bank Drive-In on Tenaha Street, causing the complete awning to come to the ground. Luckily, the driver of the Dodge, Mickey Miller, of Garrison and his 10 year old son were able to exit their vehicle uninjured. *According to Miller he was circling the bank to park on the other side when the corner of his travel trailer caught the corner of the bank awning. Next thing he heard was a rumble as the awning started falling against his driver’s side door. Somehow he was able to unbuckle the seat beat and exit the other side of his truck as it was falling. 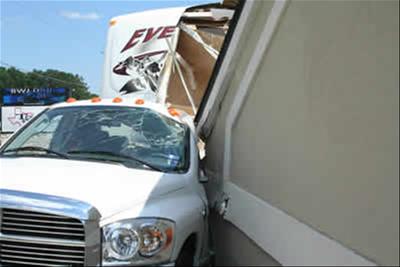 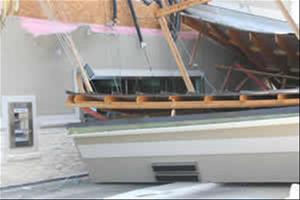 If you were designing an awning for a drive-up ATM would it occur to you that a vehicle might hit it? I think that would probably occur to most of us.

It was probably assumed that the attachment of the roof to the adjacent building provided enough support for common lateral loading (wind) but they obviously didn’t account for any impact of a vehicle. I doubt it was analyzed or designed at all.