Gander — and by extension, all Newfoundlanders — are being feted Thursday night in Washington for going so far above and beyond in fielding thousands of unexpected guests in the immediate aftermath of the attacks of 9/11.

In this Sept. 12, 2001 photo provided by Nav Canada, planes line up on the runway of the Gander, Nfld., after they were diverted there following the terrorist attacks on Sept 11, 2001. Thirty-eight planes carried in 6,600 passengers.
Nav Canada/AP file photo

NEW YORK CITY—Newfoundland doesn’t come up often in the American conversation. Almost never, in fact.
But the landlocked city of Gander — and by extension, all Newfoundlanders — are getting their due Thursday night, feted in Washington for going so far above and beyond in fielding thousands of unexpected guests in the immediate aftermath of the attacks of 9/11.“Newfoundlanders didn’t do what they did expecting accolades 10 years later. People just did what came naturally,” said Gander Mayor Claude Elliott, who led the delegation to Washington.
“But we’re certainly humbled and honoured by the recognition and appreciation we’re receiving today.”
Once a key refuelling stop for transatlantic flights, Gander faded from the aviation map with the advent of longer-range airliners in the 1980s.
But all that changed 10 years ago, mere minutes after Transport Canada began diverting the first of 39 U.S.-bound flights to Gander International Airport. Soon the city of barely 10,000 was deluged with 6,600 dazed and frightened passengers and flight crews from 93 countries expecting to land in Boston, New York, Washington and points beyond.
“None of us had ever seen anything like it. One plane after another coming in until the tarmac was full,” said deputy mayor Zane Tucker.
Those who could opened their homes to the anxious strays. And those who couldn’t cooked for them. Others still entertained and organized whale-watching expeditions to distract the traumatized guests. The Gander hockey arena was pressed into service as “the largest walk-in refrigerator in the province,” brimming with home-cooked fare. Many donors wrote their names on their Tupperware in order to retrieve the containers for the next day’s menu. It continued like that for five days.
Then came The Snub. Not just to Gander, but also to all the other Canadian cities, notably Halifax and Vancouver, that rolled out the welcome mat for thousands more sudden arrivals. Then-president George W. Bush, in his first major speech to Americans in the aftermath of the attacks, made no mention of Canada during an address referencing key friends and allies.
But the story of what became known as Operation Yellow Ribbon has been well chronicled since in virtually every medium. And the Washington welcome the Gander delegation is experiencing Thursday is “a heartening experience,” said Elliott.
The Newfoundland delegation includes church officials and Gander resident Beulah Cooper, who for five days comforted a New York City couple in her home as they awaited word of their son, only to learn he died in the Twin Towers.
Earlier Thursday, they met on Capitol Hill with New York Congresswoman Louise Slaughter, who “lavished praise not just on Newfoundlanders but Canada as a whole,” said Elliott.
On Wednesday, Slaughter introduced a resolution in the House of Representatives thanking the citizens of Gander and other Canadian cities, including Toronto, which fielded 14 flights.
“You can’t ask for any better neighbours or friend than the people of Canada,” Slaughter said in a statement.
“As we look back on that dark day, we remember not only those who we lost but also recognize the friendships that were strengthened and the hospitality of our neighbours to the north who aided American passengers in our hour of need.”
Gander’s citation — a Community Resiliency Award — was to come Thursday night at a dinner hosted by the U.S. Center for National Policy and the Voices of September 11th, with support from the Rockefeller Foundation. The delegation was being kept in the dark on what form the award would take.
“I don’t know if it is a plaque or a certificate or something else,” said Elliott. “But it doesn’t matter, really. The significance here is just being appreciated. Our citizens showed so much spirit and compassion and love and that is the greatest resource any community could have.
“It’s a normal human thing, to help people in need. And I can tell you, all the thank-yous we received from the actual passengers 10 years ago was certainly quite sufficient.
[/size][/FONT] N.L., on Sept. 11, 2002, a year after the town hosted passengers from 38 planes that were forced to land there after al-Qaeda attacked in the U.S. The town was honoured for its help in a ceremony in Washington, D.C., on Thursday. (Andrew Vaughan/Canadian Press)

The tiny town of Gander was at the heart of an American love-in on Thursday as a 9/11 commemoration event in the U.S. capital paid tribute to the kindness and generosity of the Newfoundland community during one of the bleakest moments in U.S. history.
“Canada is a true neighbour in every sense of the word and particularly after that event,” Leon Panetta, the U.S. defence secretary, told the exclusive event at the Newseum, next door to the Canadian embassy on Pennsylvania Avenue in Washington, D.C.
Gander “is a town, as all of us know, that provided comfort and welcome,” he said as the crowd of several hundred, including several American movers and shakers, burst into applause.
,hidden; }**[http://www.cbc.ca/gfx/images/news/promos16x9image/2011/09/01/911-mainpage-140x80.jpg

His warm remarks echoed those made earlier in the day by congresswoman Louise Slaughter, who welcome the mayor of Gander, the premier of Newfoundland and Labrador and other officials to the U.S. capital.
“The dark and murderous actions by terrorists … brought deep and profound changes to both our nations and across the world,” said Slaughter, a Democratic congresswoman.
“Ten years later, it’s important we remember the other story of Sept. 11 — the story of how in our darkest hour, the world’s better angels brought comfort, peace and love to a nation in need. And the people of Gander, Canada, are our world’s better angels.”
Slaughter, who represents a congressional district in upper New York state, introduced a resolution Wednesday in the U.S. House of Representatives thanking the citizens of Gander, and all of Canada, for the help they provided to the United States in the immediate aftermath of the deadly attacks.
Her heartfelt praise came at the beginning of the day-long summit paying tribute to the victims of the Sept. 11, 2001, terrorist attacks and those who reached out a helping hand.
Gander received an international resiliency award at the event, a gala hosted by the Center for National Policy and the Voices of September 11th that was considered one of D.C.'s hottest tickets during a week of painful commemoration.
Peter MacKay, Canada’s defence minister, told the event that Canada has not forgotten 9/11.
“As an Atlantic Canadian, I know how connected our communities feel to the pain and sorrow that affected so many Americans that day and thereafter,” he said in the summit’s keynote Canadian address.
“We remember Sept. 11, and we will work — as friends — to honour the memory of its victims and their families, and to move forward together as the closest of friends and partners.”
’They restored my faith in humanity’

Gander, a town of nearly 10,000 people, opened its heart — and its homes — to 6,700 airline passengers and crew members who were stranded in Newfoundland after all flights were grounded in the chaotic aftermath of the attacks on the World Trade Center in New York and the Pentagon in Washington.
Schools and meeting halls were quickly transformed into shelters by Gander officials. Residents welcomed stranded travellers into their homes for hot showers, warm beds and hearty meals.
They offered use of their vehicles; town pharmacists filled prescriptions at no cost. Local businesses donated food, toys, toiletries and clothing. The Gander Canadian Tire was told by head office to provide whatever was necessary for free to the stranded travellers.
The remarkable events in Gander profoundly moved the Americans who spent time there, prompting books and documentaries, while also serving as a positive antidote to the tensions that developed between the U.S. and Canada in the months and years following 9/11 over border security, immigration policy and other issues.
“They restored my faith in humanity,” says Kevin Tuerff, a Texan who started a “pay it forward” tradition at his company, EnviroMedia, because he was so touched by the kindness of the Newfoundlanders.
Each year on Sept. 11, Tuerff gives teams of two employees $100 and time off to perform good deeds for strangers ranging from paying for a senior citizen’s prescriptions to baking cookies for school crossing guards. The initiative has spread to other businesses over the past several years.
Gander mayor: Wanted to make stranded 'comfortable’ 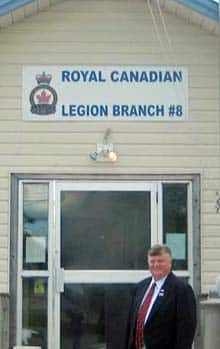 Kathy Dunderdale, the premier of Newfoundland and Labrador, echoed Elliott’s sentiments.
“We saw and were grateful for an opportunity to help in some way,” she told Slaughter. “We weren’t surprised by what the people in Gander were doing; it’s characteristic of the people of Newfoundland and Labrador.”
Slaughter pointed out that the decade following 9/11 has been a “terrible one” for the United States.
“The bright spot that we can all hold onto was the gracious and wonderful way that we Americans were treated in Canada,” she said.
“I had not ever even imagined such an outpouring of love and support from perfect strangers as we saw there.” 21:20ET 08-09/11
© The Associated Press, 2011

Obama thanks Canadians for support in “darkest hour”

OTTAWA — U.S. President Barack Obama is thanking Canadians for standing by America during one of the “darkest moments in our history.”
In a letter written to Prime Minister Stephen Harper, Obama said the terror attacks 10 years ago highlighted the ties between Canada and the United States as “great neighbours, trading partners and best of friends.
“Friendship gives us comfort and it gives us strength but can be tested in difficult times. In one of the darkest moments in our history, Canada stood by our side and showed itself to be a true friend,” Obama said.
Read the letter (PDF)](http://media.thestar.topscms.com/acrobat/46/7a/020783684db1b6dd384efe0d7f21.pdf)
In a one-page letter to Harper dated Sept. 8, 2011, the U.S. president noted how Canadians opened their homes to waylaid air travellers after hundreds of flights were diverted to Canada when the U.S. shut down its airspace.
And he noted in particular the contributions of Gander, Nfld., which played host to 6,600 passengers.
“For the next 3 days — before our airspace was reopened — these displaced passengers were treated like family in Canadian homes, receiving food, shelter, medical attention and comfort,” Obama wrote.
“Ten years later, we continue to be grateful for Canada’s friendship, and for the solidarity you continue to show us in our shared fight against terrorism,” Obama said.
“On this anniversary, we recognize all the gestures of friendship and solidarity shown to us by Canada and its people, and give thanks for our continuing special relationship,” Obama said in his letter.
In a separate announcement, Harper said that Sept. 11 would be named a National Day of Service to mark the “incredible acts of courage, sacrifice and kindness by Canadians on and following that infamous day.”
“I hope that this National Day of Service, observed hereafter on September 11, will inspire Canadians to once more show the same kind of compassion to strangers in need, by engaging on that day in charitable activities, fundraisers and community service for worthy causes across the country,” Harper said in a statement.
He said he hoped the tribute would “turn an infamous date into a day of hope marked by a communal outpouring of warmth and generosity.”

Perhaps someone should inform Hillary!

(Then) Sen. Hillary Rodham Clinton (D-N.Y.) was quoted in October 2005 as saying the terrorists had crossed into New York from Canada.

Be proud of all you did in Gander, we too here in Moncton had many displaced travellers and like the fine people of Gander we showed them true east coast hospitality and we were honoured to have helped.