Congrats to President Obama and all Americans. This is certainly “change we can believe in”. Good riddance to the insurance agency policies of the past.

Congrats to President Obama and all Americans. This is certainly “change we can believe in”. Good riddance to the insurance agency policies of the past.

We will all join you in that feeling ,once it becomes policy in place for a few years.

It’s a chink in the armor. The insurance lobby has owned Congress for many years. You can bet they will intensify their efforts…but the momentum is certainly in our favor.

It’s a great start of historic proportions. I’m proud of our president for doing what’s right instead of worrying about what’s popular.

More good news:
-Insurance companies can’t drop you when you get sick.
-No lifetime dollar caps on coverage. 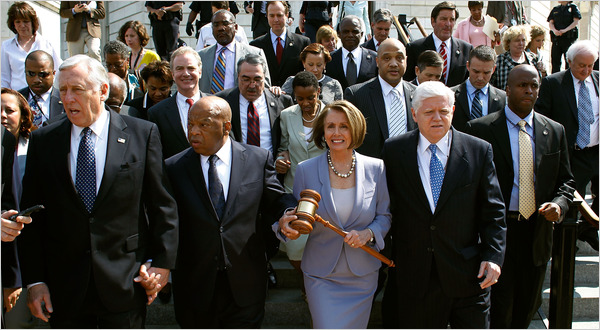 Lookin’ like that hopey changy thingy is workin’ out pretty fine tonite.

“I got your Hope & Change right here!”

The problem for the Dems, as I see it, is that tonight means that unemployment stays high for the foreseeable future. There is a direct correlation between what happened tonight and the job problem lingering.

Details will work themselves out over time.
Health is the most important part of life.

Details will work themselves out over time.
Health is the most important part of life.

True dat, but we could never have gotten here if it weren’t for the corrupt health care system that rewarded management and shareholders by denying claims.

True dat, but we could never have gotten here if it weren’t for the corrupt health care system that rewarded management and shareholders by denying claims.

True. In small defense of for-profit insurance corporations… corporations by law (they have no choice in the matter) MUST act solely in the shareholder’s best interests. I sit on may corporate boards and it is not at the discretion of the management or board of a corporation to do anything else but what is in the best interest of the owners (stockholders).

Anyway, the pre-existing condition problem was what tipped the scales against insurance companies IMHO. It was too brutal to tell consumers that they could buy health insurance but not health insurance that covers their most pressing health concern.

True. In small defense of for-profit insurance corporations… corporations by law (they have no choice in the matter) MUST act solely in the shareholder’s best interests. I sit on may corporate boards and it is not at the discretion of the management or board of a corporation to do anything else but what is in the best interest of the owners (stockholders).

America doesn’t operate for-profit courts, law enforcement, fire departments or military and those systems work fairly well, I see no reason for health care to be run on a for-profit business plan either.

You make a strong point. Fire departments used to be for-profit companies that would let your home burn if you weren’t a customer and had their emblem on the front of your home.

The government suffers from a similar conflict of interest. The interest in helping one citizen with money that it gets by harming another citizen it took the money from. Tonight they helped the uninsured and harmed the unemployed.

Pretty much anything that needs to be done will have a **negative effect,**either long term or short term.

Key is that this needed to be done,and the issue would not have gone away.

Republicans were so successful in hurting Union workers that had full coverage Medical and Dental plans over the years that millions who might have been covered before the Regan era are now left out in the cold.

Sorry to state cold hard facts about the Great Republican hero ,but he did exactly what many warned about.

His policies help nurture a working society of middle class workers forced to work as sub contractors ,rather than fully covered employees they once were.

Perhaps at first it seemed a great way to give large corporations higher profits , that would lead to less unemployment,but this left a gaping hole for many that now must use the long form and fend for themselves on the Insurance front.

The pay rate may have stayed the same even as benefits disappeared.

The problem with all this is that the high cost of Insurance and sending Johnny to a private school is not an easy choice to make.

Well here we are more than 20 years after Regan and what I said would happen then has come to pass.

Yes, every action has a negative effect somewhere.
We are just now begging to see the result of what happens when a Hollywood Actor becomes President.

I strive to get my info from as many diverse sources as I can. I received my weekly warnings from Dick Morris that President Obama was using this bill to set up “death camps” and when that became too obvious of a lie…the warnings came that the bill killed babies.

I also subscribed to several Pro-Choice information sources who have warned, consistently, that the health reform bill would put a strict limitation on abortions and go as far as to actually encourage insurance companies not to perform them.

I thought how odd it is that the Republican Party would stand against a bill that Pro-Choice people claimed would interfere with or stop the funding of abortions.

Today, I received this:

It is with mixed emotions that I write with news that, tonight, the House of Representatives passed the health-reform bill.

I am extremely disappointed to tell you that the final package includes the insulting, unworkable Nelson restriction on abortion coverage in the new system.

As you may recall, the Nelson language requires Americans in the new system to write two separate checks if the health plan they choose includes abortion coverage.** This unacceptable bureaucratic stigmatization *could cause insurance carriers to stop covering abortion care. This would represent a major setback, given that more than 85 percent of private plans cover this care for women today. *****
Despite this totally unacceptable anti-choice provision, reform will bring more than 30 million Americans into a system that includes affordable family-planning services and maternity care for women. It also outlaws some discriminatory insurance-industry practices that make health care more expensive for women. Improving women’s access to birth control and prenatal care and making reproductive-health care more affordable are also at the core of our mission.

Here at NARAL Pro-Choice America, we struggled with the dilemma of how to respond to a bill that included both positive and disappointing provisions for reproductive health. Ultimately, we determined that we could not endorse this bill due to the abortion-coverage restrictions. But, we also could not, in good conscience, call for the bill’s outright defeat and deny millions of American women the promise of better—although imperfect—health-care services that are an important part of our pro-choice values.

That these abortion-coverage restrictions remained in the bill is terrible news for all of us who believe that American women should not have to sacrifice their right to choose in order to gain ground in other areas of health care. It is an outrage that anti-choice politicians such as Rep. Bart Stupak (D-Mich.) and Sen. Ben Nelson (D-Neb.) used women’s reproductive health as a bargaining chip.

But, believe me when I say that Congress and the White House have not heard the last from us. NARAL Pro-Choice America does not accept this bill as the final word on how abortion coverage will be defined in the new health-care system. We are committed to finding opportunities to repeal dangerous and unacceptable restrictions as the new system takes shape.

Thank you for standing with us for so many months. We will keep fighting to elect pro-choice members who share our pro-choice values.

So there you have it from the horse’s mouth.

The Republican Party, the Tea Party and the Pro-Choice groups who advocate the killing of babies are banding together to fight President Obama’s health care law.

If you oppose this health care law…you, too, support the murder of children according to the President of this Pro-Choice group.

That is the dumbest thing I have ever heard you say.