Uranium contaminates water in the West 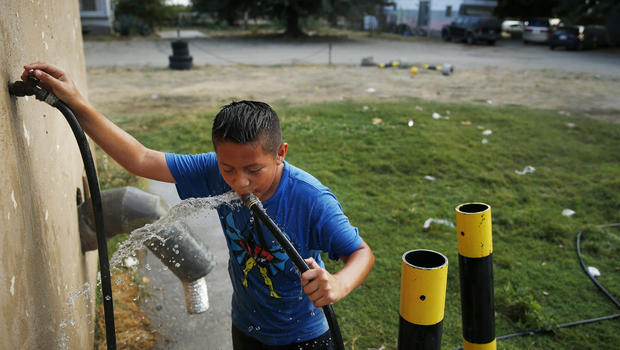 Uranium contaminates water in the West

In a trailer park tucked among irrigated orchards that help make California’s San Joaquin Valley the richest farm region in the world, 16-year-old Giselle Alvarez, one of the few English-speakers in the community of farmworkers, puzzles over the notices posted on front doors: There’s a danger in their drinking water.

Uranium, the notices warn, tests at a level considered unsafe by federal and state standards. Uranium, the stuff of nuclear fuel for power plants and atom bombs, increasingly is showing in drinking water systems in major farming regions of the U.S. West - a natural though unexpected byproduct of irrigation, drought, and the overpumping of natural underground water reserves.

An Associated Press investigation in California’s central farm valleys - along with the U.S. Central Plains, among the areas most affected - found authorities are doing little to inform the public at large of the risk. The Associated Press commissioned independent sampling of wells at five homes in the countryside outside Modesto. The results: Water from two of the five private wells tested over the government maximums for uranium - in fact, two and three times the maximum.

Meanwhile, the city of Modesto, with a half-million residents, recently spent more than $500,000 to start blending water from one contaminated well to dilute the uranium to safe levels. The city has retired a half-dozen other wells with excess levels of uranium.

Link to the article

Thanks for sharing Daniel!

EMSL can also test for Uranium and other Radiological Contaminants found in water and soil.