I got a call from a guy who said that one room is very cold. This room faces the north and is over the garage. It was the north wall that was the coldest. The IR did not tell me much from the inside and the outside tells me nothing. The only thought I have is the cold air is coming up the soffits and then hits the wall because it has no place to go. I suggested that he put in vents right by the wall. When I took the picture it was about 5C outside and 20C inside.

Any thoughts or am I in the right direction.

Sorry my regular camera craped out so only have IR

The garage is below the room and there is about a 4 foot roof from the edge to the bottom of the window and then it stops. It appears to be connected to the side so it may vent there but I feel it is not enough. 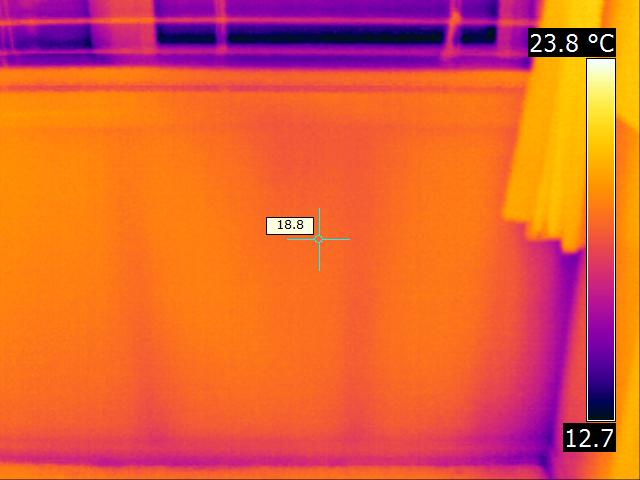 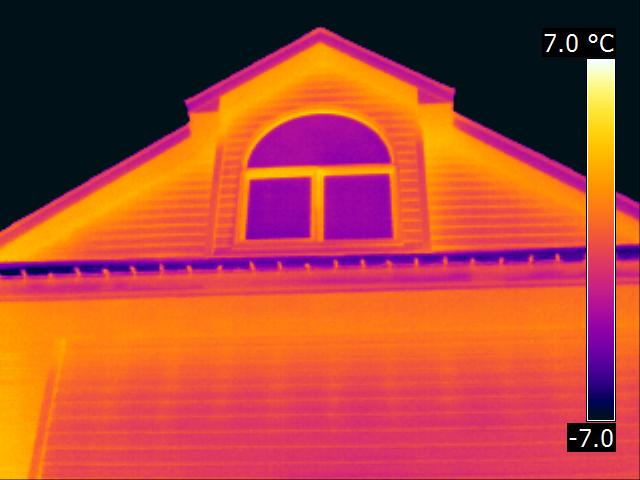 Are you saying that the room sits over a cold Garage?

The garage is colder but also heated. The wall is from the North and when there is a cold north wind the room is impossible to keep warm. My thought is the cold air is hitting the wall through the roof vents and getting trapped with no place to go but in the house.

Garage is finished, heated and appears to be insulated.

Garage is finished**, heated** and appears to be insulated.

How is the Garage Heated?

I keep looking at the pic showing the garage door. Truss runs north south for 4’ roof above garage? Could there be a gape between the ceiling of the garage and the floor of the home that had not been sealed by the wall for the room?
What do you think John? Could air be getting into the floor of the upper level floor this way? I’m thinking the air flow is going between the garage ceiling and the upper room floor that comes in from the soffit.
Lawrence is the floor cooler then the front wall you speak of. the wall appears to me to be normal.
Just my 2 cents.
Allan

I never thought of the air running between the insulation and the floor. That sounds possible. Everything seems to be about the same temp. I think I need to go back when the temp is -40C and a wind. Something might come up more then.

Here is a picture of the inside of the garage. 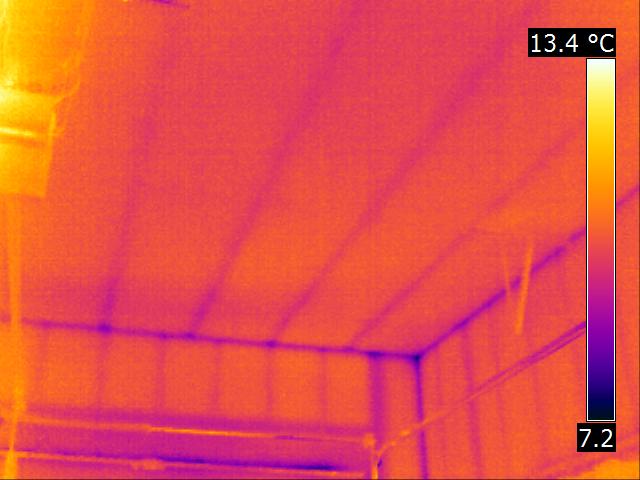 Pic looks normal to me. Let me guess. No attic hatch or access panel to area. That would be too easy.
I hope you don’t have the -40 temps too soon. It will affect here as well and I’m just starting to warm up from the last cold snap.
BTW, what type of camera are you using? Nice resolution.
Allan

There is no hatch or panel.

Yes I could do without the -40 as well but we are in Canada.

Using a Flir EX320 with the wide angle lens.

Thanks for your help
Lawrence

Joe,
You may be onto something here. If a north wind is blowing against the garage door and its cold, the entry into the garage would be greater and radiant floor heat may not keep up to heating the garage area. Basically, the garage could be at least 20 degrees less then the house(room above garage) causing that room to be cooler. Was that where you were going?
Allan

No problem Lawrence,
I enjoy problem solving and analyzing things. This has been a great exchange so far. Hopefully, we will be able to help in solving the problem. I’ll look at it again tomorrow as I’m beat and going to bed soon.
Allan

Lawrence, what about the heating system for the room. Could it be that this room is the furthest for the heat source? What about proper sizing/BTUs.

If the home is insulated correctly then whether the garage is condition or not should not be a factor.

No problem Lawrence,
I enjoy problem solving and analyzing things. This has been a great exchange so far. Hopefully, we will be able to help in solving the problem. I’ll look at it again tomorrow as I’m beat and going to bed soon.
Allan

It appears that this room would have kneewalls running from front to back and floor joists running side to side. If that is the case, the floor system may be prone to air leakage over/through the fiberglass batts installed in the floor at the point where joists support the kneewall …very common for this to be missed by a contractor with no experience with better energy conservation techniques. If the room is not heating properly on windy days, it’s definitely an air leakage problem.

(Note: I find that 95% of GC’s don’t have the knowledge or care about these better techniques as they are not covered by codes. Same with architects…if you don’t find someone, GC or architect, who is passionate about this topic and has association with R2000 / National Energy Conservation Association (NECA) in Canada or Energy Efficient Building Association (EEBA) / Building America or similar in the US, you will not get the building you should…we’ve known about these issues and techniques since the 1980’s!!!)

The room is the farthest from the heating source. Not sure about ratings.

The floor joist are running north and south, as is the room. The only place where the wall is running across the joist is the end wall.

I am also thinking you have a air leakage problem. If the vapor barrier is substandard or not terminated properly 20" of batt insulation isn’t going to do you any good.

I made an assumption that was wrong. I thought I saw in floor heating lines when I was in the basement but there is no heat in the garage. I talked with the owner this morning and he also said that the floor in the room gets very cold.

I think we found the problem. A combo of air hitting the floor and no heat in the garage.

Here is a regular photo of the front of the house. 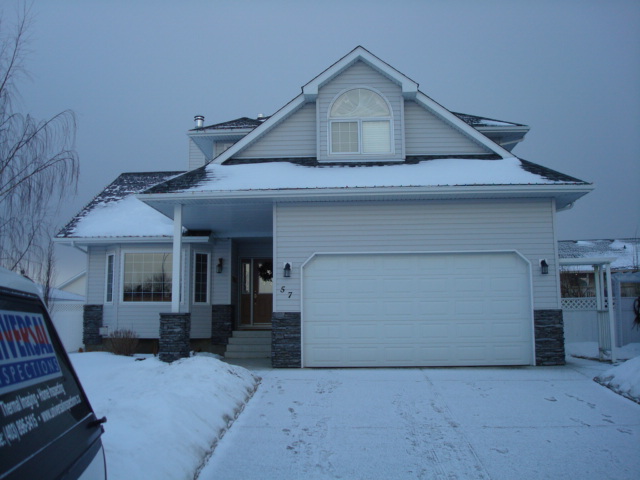 I told the customer that I will come back when it is colder and take more shots to get a better idea of what is going on.

Thanks for all your help. If there is any other ideas please let me know. I will post the other findings when it is colder.