Who posted this picture? 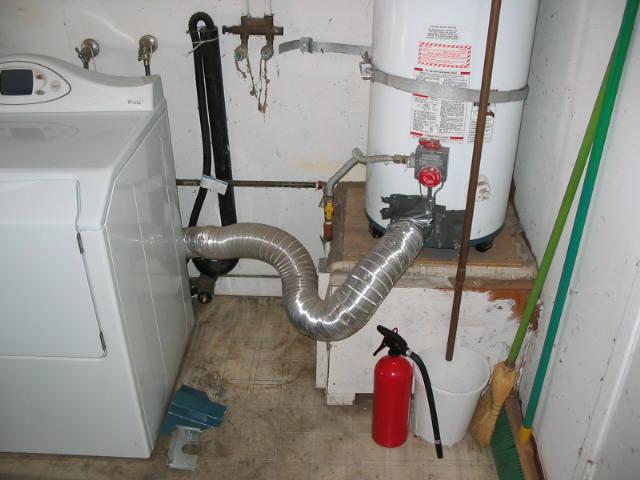 I do not know who posted the picture, but why would someone vent there dryer into the water heater burner area? Did they want to try to see if the fire extinguisher would work? Or are they trying to blow that up too!!

That is a true classic. I have no idea who originally posted that, but wow.

That has to be one of the all time classics.

That’s my picture from one of my inspections probably back in 2003 or so.

Russel seems to get all the fun ones . . . Chuck, turbocharged, I like that, maybe I should try it :mrgreen:

Isn’t that where the heat comes from to dry the clothes ?? Duh Huh !

Actually, its the Benford 5000 HWH…Tim the Toolman rigged that up at his personal residence…needless to say Jill was not happy…shortly thereafter they were rebuilding the laundry room.

my god is that wrong on so many levels

Hey maybe it was Mcgyver there enough duct tape.

Damn, it looks like I need to go redo my dryer vent:)

I know it is wrong in so many ways, but I was wondering if they were actually trying to provide some make up air looks, like a garage and they may have thought they were keeping vapors from reaching the flame. Just trying to understand how some people think (don’t think).

Nagh,
I think it will save them about $0.0006 per gallon of water heated.
It’s an upgrade. To extract every last once of energy from the dryer.
Oh, is it electric? Great. That way when you run the dryer, it blows out the pilot and main HWH gas burner flame, backdrafts into the dryer, ignites and TURBO DRIES your clothes, the paint, the walls, the structural lumber, … . Oh does anybody know where I can get Propane/NG that smells like Bounce spring fresh?