Can a boiler expansion tank be postioned up or sideways besides down?

Edit: …and be operated properly?

Can a boiler expansion tank be postioned up or sideways besides down?

Not sure what you mean by ‘down’? Got a pic? I would assume it all depends on how the tank was manufactured. Typically I see them installed ‘laying down’ like in the first pic from the OP… http://www.nachi.org/forum/f20/why-expansion-tank-above-boiler-43447/ 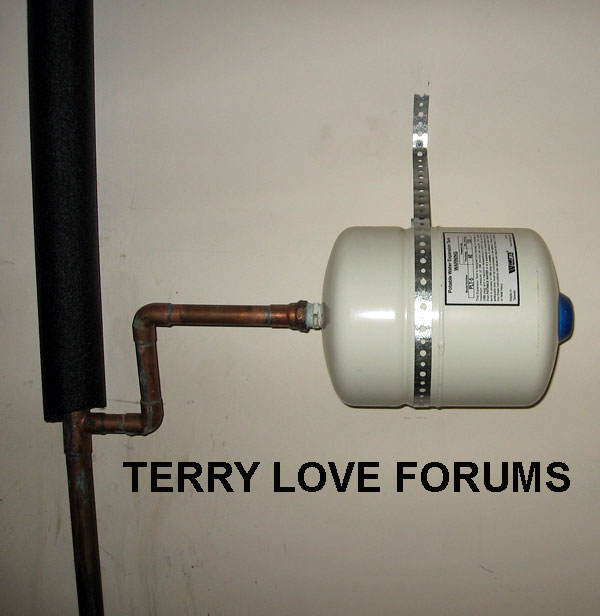 Okay… gotcha. I usually see them in the “up” position, but I don’t think it really matters. I was trained that in the up position, any water entering the tank can drain back out by gravity. Seems like there was something about the diaphram failing also, but it’s been too long ago. I see less and less boilers every year. I don’t miss them at all. Sorry I wasn’t much help.

i have seen expansion tanks installed Up, Down, Sideways…
but…
what position is Up, Down or Sideways

I’ve seen them in every position too, but mostly down. Ask Charlie if it matters, I would guess it may be according to manufacturer’s specs.

Okay, I think it depends on where the put the air scoop.

Here is a Taco Air Scoop:

The primary requirement is that they be adequately supported.

Okay, I think it depends on where the put the air scoop.

Here is a Taco Air Scoop:

I agree, the bladder should work in all positions. The air scoop makes a difference.

Any idea why they are almost always down?

I believe that the most standard installation of bladder expansion tanks on a closed hydronic system would be in the hanging position high above the boiler.

One picture Larry posted could possibly be a steel pressure tank.

The steel tanks are not the most popular – but they are still used in some of the older systems. In this unit the air and the water will touch each other and the air will compress when the water is being heated. The air is than compressed inside of the loop system to create the cushion. It will absorb the excess pressure.
Bladder Expansion Tank

In this tank the air and the water are separated through the use of a diaphragm. This tank is used in the newer systems including the ones equipped with a hydronic loop. The loop helps to control the pressure and must stay at the right level in order to work properly. It helps to install this before the suction side of the circulator pump that is in the supply side of the unit.
Because the bladder expansion tank will absorb the excess pressure inside of the hydronic loop it would help to add the make up water for the unit and hydronic loop close to where the tank is. This will help to keep the pressure relief valve, hydronic loop, and expansion tank at the right settings and with no excess pressure build up.
http://boilerinstallations.blogsavy.com/expansion-water-tanks/

I agree, the bladder should work in all positions. The air scoop makes a difference.

Any idea why they are almost always down?

The guys in the field that I talked to say it is because when they get waterlogged they are quite heavy and it is easier to remove from the down position.