I’m wondering what may have caused these spiderweb cracks observed on an inspection today. Spalling is usually not as “spiderweb” like, and the crown wasn’t any worse than lots of others I’ve seen.

My guess is the homeowner may have put some sort of sealant on the blocks, and the heat from the chimney caused the cracking.

Maybe a past chimney fire that seller “forgot” to disclose? The home has been vacant for more than a year. 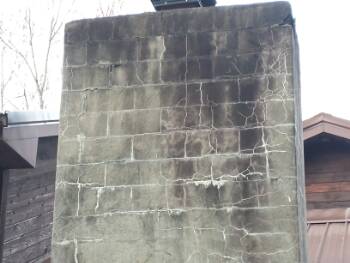 I would bet a chimney fire , what did the inside look like?

I would bet a chimney fire , what did the inside look like?

The inside was a little “crusty”, like it may have needed cleaning, but I’ve actually seen worse.

The disclosure was laid out on the counter for all to see. One of the questions was “has there ever been fire damage to the structure or chimneys”, and the “no” box was checked.

I can’t for the life of me believe a seller would not tell the truth about their home’s past history :mrgreen:

It appears to me to be water related, cracked or porous chimney cap. The white crack pattern appears to be alkali–silica reaction, can’t say for sure based on that photo.