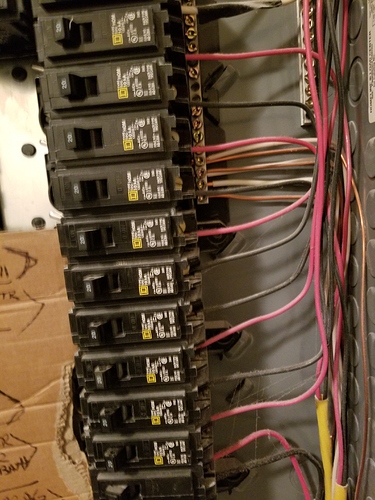 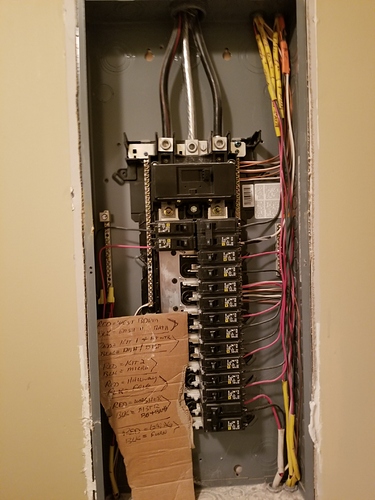 I usually see them for 240V appliances, kitchen split plus and sometimes workshop but that should not be a problem. The missing tie-bars are though.

MWBC’s are perfectly acceptable, newer versions of the NEC require that the single pole CB’s have a handle tie or that a multi-pole CB is used.

And the famous two wires under a lug.

And your point is? You have stated quite a few times that this is not an issue in Ohio. Are you changing sides now?

Just incase I ever run into this??? I don’t understand the reasoning! Or how it even works since the red and black wire will end up at the same point even though they are on two separate breakers, can someone explain this to me! Are the wires going to a junction box and then ran different directions from there with 12/2 wire?

It’s a cheaper way of wiring, because they can run two 120V circuits from a single cable with 4 wires using a multiwire branch circuit, instead of running 2 separate cables with 3 wires each.

With the advent of AFCI circuit breakers and the handle tie rule (which I hate) MWBC’s in homes are a dying breed. If not for those two things I would still use them.

It early!
What is a MWBC ?
Multi wire branch circuits?

What year did the NEC implement the handle tie rule?

Thanks for making this make sense to me, so then in Matthews photo the system should be reported on as a safety issue because of the breakers not tied together according to Robert. Also the breaker alignment would have to have the red and black wire breakers side by side to have handle ties which would also make the power supplied rooms side by side to each other because the 3/G wire would start out at the one spot and then feed 2 separate areas from there, sounds confusing but I believe I got it. 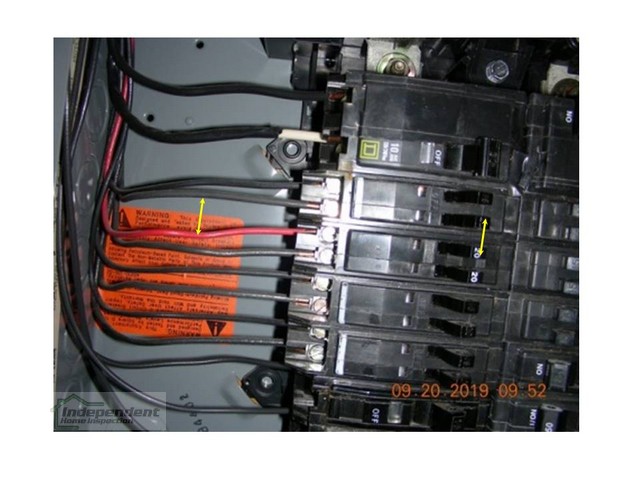 What year did the NEC implement the handle tie rule?

210.4(B) first appeared in the 2008 NEC which covered all MWBC’s. There were two similar rules in earlier editions of the NEC which required simultaneous disconnect for multiple circuits one the same yoke (such as a duplex receptacle) and for office furniture partitions.

Thanks for the response. I would of thought is was earlier than that. 1999 NEC says:

210.4(b) Dwelling Units. In dwelling units, a multiwire branch
circuit supplying more than one device or equipment on the
same yoke shall be provided with a means to disconnect
simultaneously all ungrounded conductors at the panelboard
where the branch circuit originated.

(B) Disconnecting Means. Each multiwire branch circuit
shall be provided with a means that will simultaneously
disconnect all ungrounded conductors at the point where
the branch circuit originates.

Although the language changed they seem to say the same thing. “disconnect simultaneously” or “simultaneously disconnect” Don’t have anything before 1999.

Although the language changed they seem to say the same thing. “disconnect simultaneously” or “simultaneously disconnect” Don’t have anything before 1999

They’re similar but not the same. The pre-2008 language applied only when it fed two circuits on one yoke, like a duplex receptacle. 2008 expanded that to include all MWBC’s.

Thanks again, a good example of what happens if you don’t read all the words. To compound the confusion I found the following illustration in an NFPA publication (pre-2008). Proper illustration, just lacking the words “same yoke’”

You save a few bucks on the cable & installation, but what happens to the connected equipment should you lose neutral

Would not have it in my house, not worth the risk, don’t like 'em.

So I assume the slim breakers are always on the same phase, then?
Thx