Am I being lied to?

Sorry if this is the wrong forum and I am not an inspector, just a home owner, but feel like I have been alienated and cheated.

I have a lennox heat pump which was installed 3 years ago, I just bought the condo so I was not the owner at install.

There seems to be a major problem with my unit which was not detected by my inspector.

A few rings of coils on my exterior unit are freezing up. the rest of the unit system has been thoroughly checked from ducts to blower to compressor.

I was told by an independant contractor that the unit was installed improperly. The freezing is caused by blockages in the outside coils due to improper or sloppy “brazing?” or soldering (sp?).

Can i call upon the expert opinions here to

I am far from an expert, but that doesn’t sound right.

Secondly, what part of the country are you in, and what is the outside air temp when the unit is frosting?

Heat pump outside coils normally frost up when in the heating mode, and are designed to defrost themselves.

1st, HVAC evaluation is not the responsibility of a Home Inspector.

Next, I will assume that you have a Heat Pump.
Where do you live?

The rings: Got a picture?
At what outdoor temp do you see this?
What is the relative humidity?
What were the refrigerant pressures your contractor took?
Where does the frost start to form on the lines? Can you see?

There is a distribution header inside the unit where a feeder tube joins each of the circuits (rings).

Refrigerant temperature and pressure are relative. Temperature goes down proportionally to pressure.

For a heat pump to absorb heat from the outdoor air (OA), it must be colder than the OA (design is about 30 degrees lower than ambient). So at 60 degrees OA, the coil is around freezing. So why should we not see frost?

Heat Pumps freeze up in the course of normal operation.
You have not provided any information to support any defect.
Your expert contractor has not provided any proof (temperature differential across the brazed restriction).

There is no sure way to point a finger at any one responsible party for you to take action against because the work was done before your ownership (so you lack the required information).

You need more information and so do I.

Thanks, David. That was a learning experience for me.

Good post David I don’t beleive I could add to that other than to tell mister Noah that there are many unscrupleous contractors that will try to pursuade one to buy a complete unit rather than repair. Know who you are dealing with.

Funny this post should come along at this time was on an inspection this morning and had a phone call from one of my HVAC friends about a heat pump he was working on, I was trouble shooting over the phone:shock:

Much apprecited for the response!!

Its been a month since my post and my heating has been working very well…
I am still having a frost issue though, whihc from you post seems to be expected.

Here are a few pics of my unit.
Temperature on thsi day is mild (40 degrees or so) and wet. 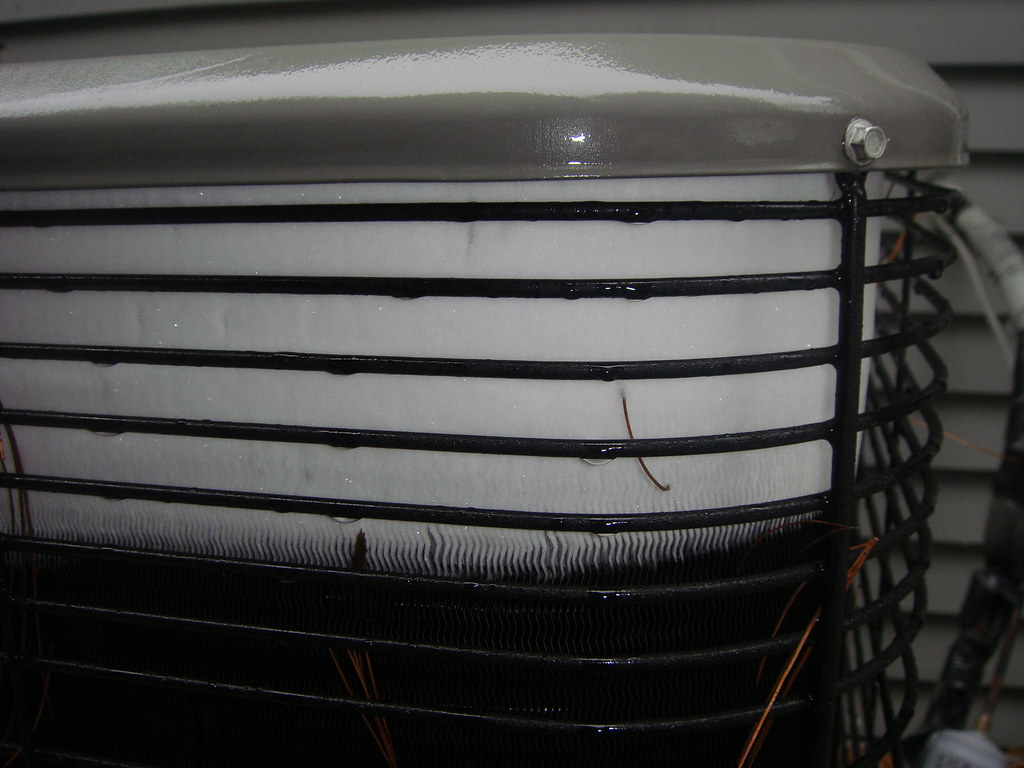 You can see the 4 distict frost rings taht are forming.

A question for someone who knows more than me (probably all of you!)

-Does this frost look “normal” for a heat pump
-Should there be any concern that it is only forming on a few “rings”, is this indicitive of anything?
-Once i see it very frosted i have been turning off the air to prevent damage, it sounds like this is not necessary, is it?

No sir, I do not consider that normal operation.

The weather is too warm outside at 40° to be freezing in this manner.
What you see here are four White stripes that indicate there are four circuits to the outdoor coil. Each of these circuits are fed by small distribution tube after it passes through some form of metering device.

This metering device can be a device such as the carburetor on your car that changes the amount of gas passing through it depending on the load requirements. A second type device is an “accurator” which is a small piston with a properly sized hole that controls the amount of refrigerant passing into the coil. This type is most commonly found as the heat pump load is relatively stable at low outdoor temperatures.

This Frost pattern is an indication of a “starved outdoor coil” which can be indicative of a low refrigerant charge and/or an improperly sized accurator, a restricted orifice in the accurator (or in the event that you have a thermal expansion valve (the carburetor type device) where there are several things that could go wrong here.

First of all we must determine that the refrigerant charge is adequate according to manufacturer specifications.

If there is a restriction in the accurator, adding more refrigerant will not change anything.

If you add refrigerant and the frosts goes away, that was the problem.

The problem with heat pumps in the winter time is it there is no accurate way to determine the refrigerant charge without actually weighing the charge. If testing the refrigeration pressures according to the manufacturers charts does not show proper pressures for existing conditions, the refrigerant should be removed and weighed.

A further explanation of what is going on here is that refrigerant is actually being sucked through the outdoor coil by the compressor. If there is a low refrigerant charge or a restriction in the metering device the refrigeration pressures of the outdoor coil will go extremely low. Low pressure results in low temperature (resulting in the frosted lines). Proper charging and metering of the refrigerant through this coil should saturate the coil and provide an even Frost pattern from top to bottom under normal operation.

In the area where the frost is, you are converting liquid refrigerant to a vapor, absorbing large quantities of heat in the process. Once you’ve run out of liquid refrigerant and the vapor becomes superheated, it can not collect any more heat so the coil doesn’t frost on the remainder of the circuit.

Another issue that you’re experiencing is improper defrost. The coil freezes up solid after it runs long enough and does not automatically defrost. This is due to improper temperatures where the sensors are and possibly insufficient refrigerant charge to generate enough heat to melt the ice from the coil in an expedited manner controlled by the defrost computer.

Any HVAC contractor that’s worth squat with heat pumps should be able to readily determine what’s going on.

Considering your previous question about bad soldering techniques diagnosed by your HVAC contractor, the only soldering that is done during installation is at the lower two areas in the picture below.

The quality of workmanship from these photographs appears normal.
The other two areas indicate one individual circuit which is operating under approximately 50% capacity.

Noah, I see your on line. If you have further questions, go to the message board on my web site at:
www.midtninspections.com

As an HVAC Service Tech I have a question. Was the indoor coil changed with the condensing unit? If not there is a possibility that this is the problem. Not matching the system will result in problems.

What problems do you suspect could occur?

What problems do you suspect could occur?

Here are some documents about mismatching a system.

Back in the early 90’s the US Department of Energy was concerned about mismatching systems and commissioned Carrier Corporation to test systems with mismatched systems particularly outdated capillary tube metering devices. The study basically shows the same results that Bristol found. Lower performance less capacity. On heat pump systems the charge would have to be constantly readjusted for heating then cooling modes.

The problem of mismatching is being met by some manufacturers requiring the model and serial number of the evaporator on any compressor warranty change outs and disallowing warranty on mismatched systems.](“http://rds.yahoo.com/_ylt=A0geu.d30mRJIdgAkyJXNyoA;_ylu=X3oDMTEya2ZsZ2Y5BHNlYwNzcgRwb3MDMQRjb2xvA2FjMgR2dGlkA0gxODRfODA-/SIG=140burga2/EXP=1231430647/**http%3A//www.city-data.com/forum/attachments/house/17494d1207421364-ideas-saving-energy-mismatched-systems.pdf”)

Funny you mention that.
A few details that got lost in translation.

This caught my attention though. Obviously trying to find out what is wrong is usually a process eleimnating what isnt wrong. The air handler is Bryant, the Heat pump Lennox. That is why Garys question really struck me.

I cant begin to thank you guys for the advice so far.
David, I am going to log into your website and Gary…are these two components known to cause a problem?

I guess what i really need to know is…what is my next step…
am i seconds away from my unit ceasing to work? Do i need to replace the unit or do you think it is more likely the thermal expansion valve or other regulating device?

It worked great (and still does work) but the freezing problem continues.

It seems to work in heat because there are two heaters in a heat pump.
When the refrigeration process of the heat pump does not operate the electric heat takes over, and costs a lot to operate.

I told you what can be the problem. I can not tell you any more from here. It’s up to your local HVAC contractor now.