My biggest concern is missing a Faulty deck .

about 90% of the decks I inspect have some serious defects.

Thirteen partygoers were injured, some seriously, when a balcony collapsed at a house north-east of Melbourne, crushing people underneath the structure. The timber balcony collapsed about 8.40pm (AEDT) at the two-storey home in Taylor Road, Hurstbridge, as the party host, known to friends as Elvis, called out as he was about to make a speech.
There were chaotic scenes at the home, as ambulance officers, volunteer emergency crews and neighbours worked frantically to treat the wounded.
The injured partygoers included a young woman recovering from a bone-marrow transplant, who suffered a head injury, and a 88-year-old woman who had a compound fracture in her leg.
A male neighbour, who ran to the collapsed balcony and was one of the first on the scene, helped his friend to an ambulance after he was trapped underneath the structure.
“I helped the paramedics attend to a friend of mine, who got trapped underneath the balcony when it came down,” the neighbour said, who did not want to be named.
“We helped bandage him up and put dressings on him and put him in the ambulance.”
The neighbour said he helped the leukaemia patient during the chaotic scenes.
"We helped another young lady, a chemo patient who just had a bone-marrow transplant – she was hit in the head and we helped her in the ambulance as well.
“There were people running around, a bit distraught and all that. I just did what I could. I knew the people and I just helped out what all neighbours would do.”
The neighbour said it “was just an unfortunate set of circumstances” after the host called his family and friends to gather for a speech.
“The host just called everyone out, because he was going to make a speech, and then the balcony just collapsed,” he said.
“Being dark, it was pretty hard to ascertain what caused the collapse, whether it was a structural fault or (the weight of) too many people.”
Country Fire Authority (CFA) voluntary crews, police and ambulance were among the emergency services at the scene.
Two people have been taken to Royal Melbourne Hospital, seven to Northern Hospital in Epping, two to Box Hill Hospital, and two to Austin Hospital, including the host, for a suspected back injury.
Of those taken to Northern Hospital, five described as the “walking wounded” were taken in an ambulance bus.
A nearby neighbour, Barry Smith, said the neighbourhood was busy with emergency crews, as ambulance officers worked fast to help the injured.

“We counted up to eight leaving the party in ambulances,” Mr Smith said.
“Elvis (the host), he was probably the worst (hit) – he was taken away first. He had a laceration on the lower leg, and some bruising on the hip and shoulder.”
Mr Smith said there were more elderly people struck down in the collapse.
“We noticed there were a lot of elderly people in the back of the ambulances. I counted more elderly people (than younger people in the back,” Mr Smith said.
“Apart from that, there were no fatalities. There was a lot of bruising and lacerations.”
Mr Smith said a section of the balcony collapsed, leaving some of it intact.
“It would have been the crowd gathering in all of the one section that’s possibly caused it to fall. You think about it – if we all weigh 70 kilos or thereabouts, you’ve got a massive amount of people and it adds up to tonnage.”
Mr Smith said people underneath the balcony were the worst hit.
“It’s the people underneath that copped the full brunt of it,” he said.
MAS Health Commander Tom Witte said the large number of people injured at the engagement party had caused confusion.
"Some people were under the balcony, some on the balcony and they were immediately assessed by our paramedics.
“The most seriously injured were assessed and treated first and we transported them to a number of hospitals.”
Mr Witte said there was a mix of men and women injured.
“There were several people sitting on top of the deck and listening to speeches for the engagement party,” Mr Witte said.
"There were mostly elderly people on the deck. When it collapsed, they all didn’t completely fall; the deck fell forward and they all slid down the deck and there we a couple of people under the deck that impacted on them when it fell.
“The gentlemen underneath the deck came off worse; I think he has got a possible fractured pelvis or hip.”
Mr Witte said the majority of patients were well into their 70s and 80s and one the men was in his 40s.
Mr Witte said the MAS emergency response plan was implemented as soon as the severity of the incident was recognised.
“The balcony has broken away and sloped towards the ground, so the patients were lucky that they slid down the balcony than they fell the larger distance,” he said.
"The people under the balcony were extremely lucky that they weren’t more seriously injured. However, given the number of patients, our paramedics have been able to assess and treat them in a very good time.
Mr Witte said the elderly people were lucky to escape with some “bumps” and soft-tissue injuries, adding they could have been more seriously hurt.
Two nurses, who were local residents, also helped with the rescue effort.
AAP

As I’m sure Roy, I too look at decks throughout to insure all safety is adhered to. This seems to be happening more and more lately. Hope everyone involved comes through it okay.
Allan

As I’m sure Roy, I too look at decks throughout to insure all safety is adhered to. This seems to be happening more and more lately. Hope everyone involved comes through it okay.
Allan

Good post Roy, every inspector should become an expert in deck construction.

I had this one last week. Brand new deck on a “flipper”. The only attachments used were the driven nails as seen.The deck wrapped around the back and the side. I bet there were over 100 nails. :shock: 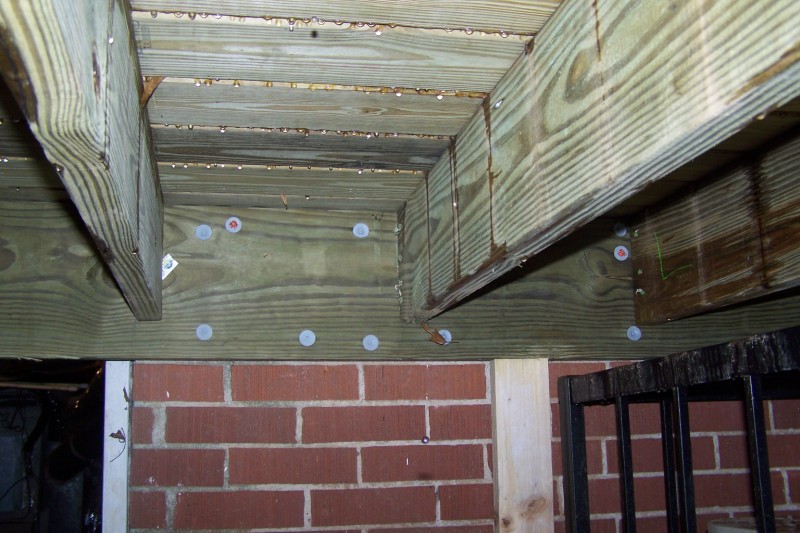 What I give to “flippers” after I inspect their defective decks. Atlanta Deck Construction

I had this one last week. Brand new deck on a “flipper”. The only attachments used were the driven nails as seen.The deck wrapped around the back and the side. I bet there were over 100 nails. :shock:

What I give to “flippers” after I inspect their defective decks. Atlanta Deck Construction

Good catch remember write hard talk soft and miss nothing.
I see no Joice hangers in the picture, find this often and when they are used seldom enough of the correct type of nails.
Not roofing fill every hole with a nail.
Screws are not allowed ’
I like ledger board flashing to and threw bolts for ledger board fastening .

Good catch remember write hard talk soft and miss nothing.
I see no Joice hangers in the picture, find this often and when they are used seldom enough of the correct type of nails.
Not roofing fill every hole with a nail.
Screws are not allowed ’
I like ledger board flashing to and threw bolts for ledger board fastening .

I wrote hard enough that the selling agent (also the flipper) has called me for the last 2 days picking my report apart. I have never had to use the “permit” card. But this one I think I will need to. It’s obvious he didn’t permit anything on this house, I’ve got a request in from the county to see if permits were applied for. In Dekalb county they would never allow a deck like this, which raises the red flag. He won’t be too happy with me by the end of the week.

I just wish these guys would do it right the first time instead of cutting corners. In some cases they aren’t cutting corners, they just don’t know any better. :shock:

But my client is extremely happy! Which is what matters.

Speaking of decks, here are couple pictures from today’s inspection. 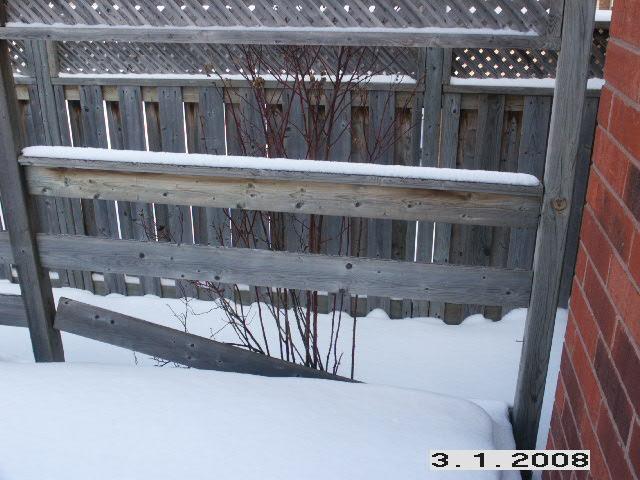 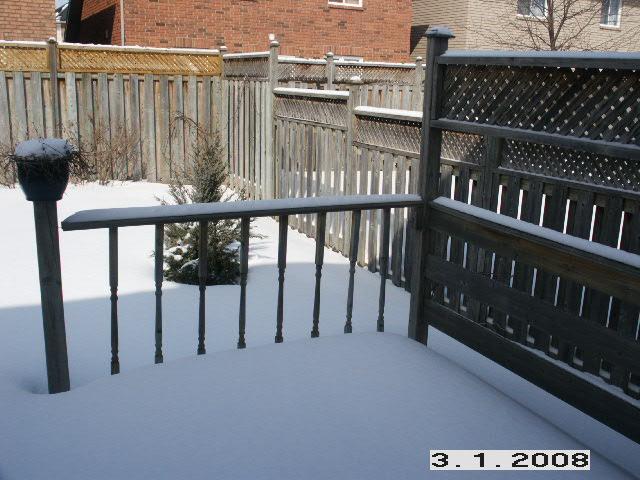 I see defective decks on a weekly basis here.

Here’s a nice sturdy deck. They attached the floor joists to the 1 X 6 (nailed) wood trim of the house. That’ll hold a party of four.

My biggest concern is Decks and Moisture Please do not miss them .
…Cookie

By Cathy Gandolfo
SHIP BOTTOM, N.J. - (WPVI) –
The group that rented a $2000 a week house saw their vacation come to an early end this morning when the deck collapsed.
The injured suffered cuts and bruises, a back and knee injury, and one serious head injury.
The collapse happened at 9:20 this morning.
Police say 8 people were standing on a small second floor deck when it came crashing down
Municipal building inspectors are investigating the accident, but it is clear to see that the deck was attached to the house with nails only and probably not meant to withstand the weight of eight adults.

Seven of the eight people were injured, one seriously.
He was airlifted to Atlantic Care Regional Medical Center’s trauma unit.
One renter said 10 young people from the Hamilton Township, Mercer County area rented the bay front house for the week.
Police say about 20 were inside when they arrived after the accident.
Police say the Tannersville Inn Corporation in the Pocono Mountains owns the home.
It was built in 1960 and remodeled at some later time, but there are no current orders for work permits.
The renters collected their belongings this afternoon and left without comment.
Police said they will also look at underaged drinking as part of the overall investigation

The one in New Jersey occurred last summer…

The one in New Jersey occurred last summer…

Thanks Joe.
Google sent it to me at two AM and I did not look close enough .
But it still is not a bad reminder for us to try and make sure of the conditions of those we do inspect.
Will soon be the season for more people hurt on bad decks.
Sure hope no Inspector get caught in a court case.