California City Wants to Require Solar on Every New Home

On the heels of this…Analysis: Renewables turn utilities into dinosaurs of the energy world

(Reuters) - Every new solar panel installed on European rooftops chips away at power utilities’ centralized production model. Unless they reinvent themselves soon, these giants risk becoming the dinosaurs of the energy market.

California City Wants to Require Solar on Every New Home

The purpose of the solar energy system standards,” it reads, “is to encourage investment in solar energy on all parcels in the city, while providing guidelines for the installation of those systems that are consistent with the architectural and building standards of the City.” It is further intended “to provide standards and procedures for builders of new homes to install solar energy systems in an effort to achieve greater usage of alternative energy.”

The standards spell out simple, common-sense rules for both roof-mounted and ground-mounted systems. They also deal with some interesting issues:

so what dose this mean for us as home inspectors ?

so what dose this mean for us as home inspectors ?

We’re not code inspectors…so it means nothing for now. It the future though, we may have to inspect solar panels, if the SOP changes.

Nice looking system Roy.
Can you offer any details on how much electricity it provides,
and maybe any kind of savings from month to month?

With the amount of sun TX gets, I do not understand why there isn’t a push for something like this on new constructions.
I recently was in Australia, a little over an hour North of Melbourne, and this town was full of houses with not only solar panels, but sheet metal roofs with gutters and downspouts filling up huge underground water tanks to be used in the house.
The family I was staying with hardly needed to buy power or water. Pretty much self-supported. It’d be just as easy in Houston.

Wake me up when taxpayers don’t have to help you pay for it.

The True Cost of Solar Power

Power of the Sun: Menino Pushing Residents to Solarize Their Homes

November 26, 2013
By John Lynds](http://www.eastietimes.com/author/john-lynds/)
Mayor Thomas Menino is making a big push here in East Boston to get residents to solarize their homes.
At the last Orient heights Neighborhood Council meeting, a representative from Renew Boston urged residents to take advantage of the city’s solarize program. The city also sent people door to door in the neighborhood Saturday asking if residents wanted to undertake a free energy audit and learn more about solarizing their homes.
“My team is dedicated to reaching even more residents to see if going solar is right for them,” said Menino. “Through the Renew Boston Solarize program, residents can lock in lower energy costs, create new clean energy jobs right here in Boston and help us continue to ‘greenovate’ our city.”

Since its August 26 launch, the program has signed contracts with 60 Boston residents to install a combined total of 302 KW of solar power and has reached Tier 4 community pricing. More than 700 homeowners have received or scheduled solar home assessments and the program is well on its way to reaching its goal of 150 homes “Solarized.” The deadline for participation in the current bulk pricing offer is November 30.
Renew Boston Solarize has partnered with Next Step Living, a leading whole-home energy solutions company, to conduct the program’s solar home assessments and bring competitively priced solar panels to Boston homeowners by providing more affordable rates and streamlining the process for going solar.
Renew Boston Solarize continues to hold free Solar Information Workshops in neighborhoods in Eastie and across the city this fall.
Eastie residents can visit Solar.RenewBoston.org for workshop details or to see if their home is a good candidate for solar. To date there are over 400 residential solar installations in Boston which can be viewed on the Renew Boston Solar map at gis.cityofboston.gov/solarboston.
Renew Boston Solarize is part of Greenovate Boston, Mayor Menino’s new citywide branding for Boston’s sustainability initiatives. Visit GreenovateBoston.org for more information

The simple test for any form of energy.

Does it use taxpayer subsidies to make it attractive to buyers?

The simple test for any form of energy.

Does it use taxpayer subsidies to make it attractive to buyers?

Gee they used taxpayers money years ago so we all could have safe drinking water and better handling of sewage.
They still use taxpayers money for continuing improvement of many things .
Like schooling ,fire dept., police ,roads and many more things …
No way can I see this use of my taxes changing .
The average person in north America now lives 40+~ years longer from 100 years ago with the help of Taxpayers money and are better educated from this use too, 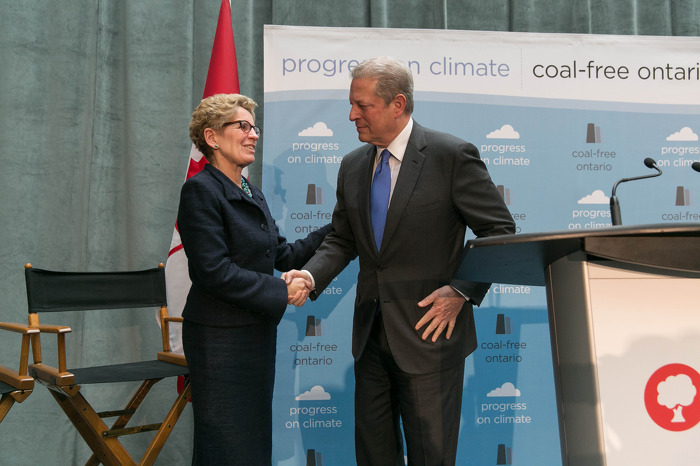 Ontario is one step closer to being the first place in North America to eliminate coal as a source of electricity generation.

[FONT=Calibri]November 21, 2013 2:30 p.m.[/FONT]
Office of the Premier
Ontario is one step closer to being the first place in North America to eliminate coal as a source of electricity generation.
Today, Premier Kathleen Wynne welcomed Al Gore, former Vice-President of the United States and Chairman of the Climate Reality Project, to the MaRs Discovery Centre in Toronto. They highlighted the closure of Ontario’s coal-burning Lambton and Atikokan facilities ahead of schedule, and the upcoming closure of the Nanticoke Generating Station - the largest coal plant in North America.
Over the next year, Thunder Bay Generating Station will stop burning coal and will be converted to use advanced biomass, a fuel for electricity generation. This is the last major step in Ontario’s plan to eliminate coal-fired electricity.
Next week, as part of Ontario’s commitment to combat climate change, the province will also introduce the Ending Coal for Cleaner Air Act to ensure the public health and climate change benefits of eliminating coal use for electricity generation in Ontario would be protected by legislation.
The Ending Coal for Cleaner Air Act would ensure that once coal facilities stop operating by the end of 2014, coal burning generation on the electricity grid will never happen again.
Protecting the environment while providing clean, reliable and affordable power is part of the government’s plan to invest in people, build modern infrastructure and support a dynamic and innovative business climate across Ontario.
Quick Facts

· Ontario’s elimination of coal-fired electricity is the single largest greenhouse gas reduction initiative in North America.
· The costs to society arising from air pollution include increased hospital admissions, lost productivity from sick days and even premature death.
· According to an independent study, Ontario’s coal-fired power plants cost the people of Ontario an estimated $4.4 billion per year in health, environmental, and financial damages.
· Early coal closure at Lambton and Nanticoke will save the province’s electricity customers about $95 million through reduced operating and maintenance costs.
Quotes

[FONT=Cabin]Our work on eliminating coal and investing in renewables is the strongest action being taken in North America to fight climate change. I believe we can work together as stewards of our natural environment and protect our children, our grandchildren and our fellow citizens.”[/FONT]
Kathleen Wynne
Premier of Ontario
[FONT=Cabin]To solve the climate crisis, we need people, provinces and countries to show the way forward towards a coal-free, sustainable future. Ontario has distinguished itself as a leader in Canada and around the world. It is heartening to see the tremendous progress that has been made here and it is my hope that others will quickly follow suit.”[/FONT]
Al Gore
former Vice-President of the United States and Chairman of the Climate Reality Project
[FONT=Cabin]Ontario has shown the world that bold action on climate change can be done. Ontarians should feel proud to live in the first jurisdiction in North America that is kicking the coal habit, a place that today took immediate meaningful action on climate change.”[/FONT]
Tim Gray
Executive Director, Environmental Defence

[FONT=Cabin]We are fulfilling our commitment to phase out coal-fired electricity in Ontario. Moving from regulation to legislation signals how important ending coal use is to protect clean air and public health.”[/FONT]
Jim Bradley
Minister of the Environment

Gee they used taxpayers money years ago so we all could have safe drinking water and better handling of sewage.

Between the US and Canada, we have enough oil to fuel (literally) our economy without wasting taxpayers money on less effective means of energy through government subsidies. If green energy is as “awesome” as purported by the global-warming committee, it wouldn’t require these subsidies to be implemented.

We want to sell more oil and gas to the USA ,but many down there say No .

We want to sell more oil and gas to the USA ,but many down there say No .

Coal is plentiful and cheap.

We have hundreds of years of supply.

Why shoot ourselves in the foot by mandating more expensive energy?

I’m not sure why you would consider that a good thing, unless you believe in the scam that is global-warming.

Can you offer any details on how much electricity your system provides,
and maybe any kind of savings from month to month?

I am still looking for facts on solar, thanks for any help.

I am still looking for facts on solar, thanks for any help.

I’m not sure why you would consider that a good thing, unless you believe in the scam that is global-warming.

Not made up my mind plus or minus on Global warning but I do not like the Dust from the coal it has caused many problems for a lot of years.