condensation removal pump terminates into the vent pipe in the attic

It appears that the air conditioner condensation drain pipe maybe improperly connected to the vent pipe in the attic. The biggest concern is sewer gases entering the living spaces.

In your case, the condensation drain pipe is installed properly and leads to the outside. However someone decided to disconnect this pipe and cap it of. Next a condensation removal pump was installed and the hose terminates into the vent pipe.

This is a first for me and conversations at many forums gives different feedback. The primary concern is sewer gases entering the living space of your home. Therefore, some says it is a no-no to tie into the vent pipe, others claim it is an ok practice as long as there are p-traps involved.

I do not know the ramifications of sewer gases traveling through the condensation removal pump especially during the winter when the heat is on and the condensation hose drys out. Therefore, my best recommendation would be to have the condensation drain pipe reattached making sure there is no blockage that caused a repair using the pump. Using gravity uses no electricity by the way.

The next concern is the secondary drainage system. The drip pan is open to the attic. If the condensation removal pump fails and water backs up in the unit the drip pan could over flow before you could figure out there was an issue. We recommend further evaluation from a licensed plumber.

Guys what do you think?

It’s typically accomplished via simple gravity feed to the exterior gutter, or down to the ground in the vicinity of the compressor unit.

A pump is only used when gravity cannot accomplish the task.

Penetrations into the vent stack need to follow the same rules as any other.

Just remember one key word (wet trap) the condensate can not discharge into the sewer system unless there is a wet trap in the line. A P-trap in the condensate line between the A-coil and the sewer line be it in the attic as a vent or within the crawl space is not considered a wet trap unless the furnace is high efficiency and produces condensate then the trap is considered as wet. I see it all of the time installed by licensed contractors that don’t know the difference. Here is one from just yesterday 3 A/C installed two connected to the sewer improperly and one discharging to the exterior of the structure Both condensate lines had P-traps installed and both were dead wrong 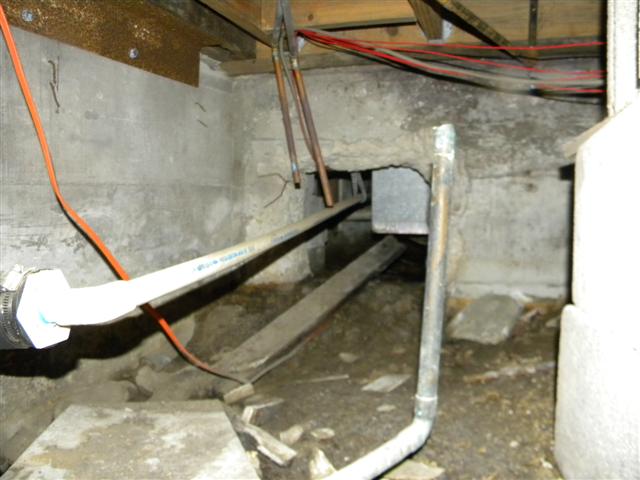