The photo shows insulation is a crawl space of a house I worked at today. The older insulation with paper face is above this and still in place. The new insulation has plastic on both sides. Won’t this trap moisture? I thought the vapor barrier always went toward conditioned spaces and no doubling. 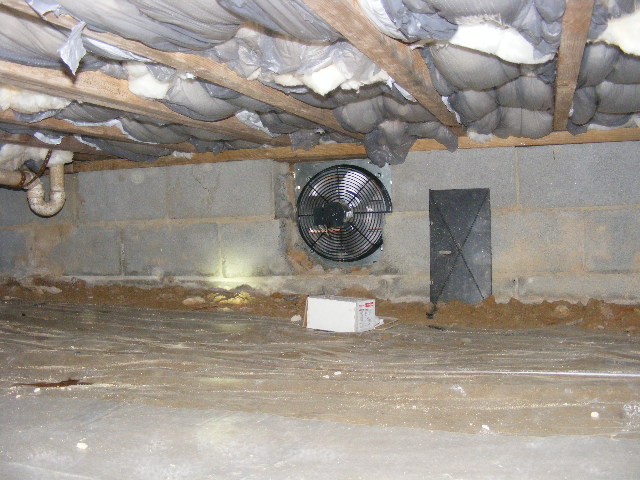 Yes that is poorly installed insulation to say the least. A marginal good thing is that the outer vapour barrier is not continuous, not completely sealed on the cold side. I have never seen insulation batts with plastic on both sides, is that just an extra plastic layer they put in there? But you are right to say that the barrier if present at all should only go on the warm, uppermost surface. Is there any moisture trapped in the plastic? If so, it should all be ripped out and redone. :mad: The homeowner may want to consider insulating the crawlspace walls and converting to a conditioned, (sealed from the outside) crawlspace - more efficient and a dryer, warmer floor.:mrgreen:

The plastic wrap might not be a vapor barrier. Owens Corning had the ‘itch-less’ stuff that the plastic was perforated. So in it could go over another layer of insulation.

It was also packed in very tight, had a heck of a time just moving it to look at the plumbing penetrations.

Kenneth,
Exactly what was the reason for the fan. I know that some are put in for ventilation and some are for moisture control, but that looks to me as if it might be a standard off the shelf attic vent fan. Is this a dry area?