Audits can detect leaks, suggest fixes
January 19, 2008; Page W1
Five days ago, I got audited.
A man arrived on my doorstep, notebook in hand, and for three hours inspected every room of my house. He asked about my electric bills and scrutinized my home office. But it wasn’t tax-filing flaws he sought – it was fissures in my insulation, doors and window frames. My visitor was a professional energy auditor. His mission: to find my home’s inefficiencies and lower my heating and electric bills.
http://s.wsj.net/public/resources/images/OB-AY053_house__20080118184027.jpgLatex caulk is cheap and goes on quick to plug small openings where the ceiling, window frames and baseboards meet walls.While energy audits have been conducted for decades, often through utilities, many were free, eyeball-only inspections that noted basic woes (the need for more attic insulation) but didn’t go much further. In today’s world of costly heating and cooling bills, along with carbon-footprint consciousness, there is a fast-growing industry of analysts wielding high-tech tools such as infrared cameras. They produce comprehensive reports on a home’s energy efficiency, along with suggested fixes and contractors.
Unfortunately, that information doesn’t come cheaply – typically, $300 to $700, though aid often is available for low-income homeowners and some utilities provide audits free. Plus, almost anyone can call himself an “energy auditor,” making it tough to know who is legit. Some suggest products and services to fix energy flaws – but don’t always disclose that they have ties to the products’ makers or sellers. That has sparked a push by two nonprofit groups to develop a single certification standard, to be announced this year, defining what these intensive audits should include as well as training and ethics criteria for the auditors.
“That’s the challenge we are facing,” says Claudia Brovic, a director with the Residential Energy Services Network (Resnet), one of the two nonprofits. Her group, along with the Building Performance Institute, help certify companies and individuals who offer energy audits, working closely with the Environmental Protection Agency and U.S. Department of Energy. “People need to know what they are getting.”
http://s.wsj.net/public/resources/images/OB-AY058_aboutt_20080118193845.jpg)Take a room-by-room look) at how Ms. Bounds fixed the energy hogs in her home.Interest in home audits is rising in tandem with energy prices. Traffic has climbed 53% in the last year on the Energy Department’s audit-information Web page, which gives links to reputable auditors. Resnet now has 3,000 certified raters, and Ms. Brovick says interest is “growing fast.” One utility, Connecticut Light & Power Co., says that some 4,400 customers received audits last year, double the number in 2006. And many states and utilities make available financial incentives for energy upgrades. For instance, under the PA Home Energy project launched in August, residents of western and central Pennsylvania can get $200 to $1,000 for improvements that lower energy bills.
Auditing could become a year-round gig thanks to a movement to mandate audits during home sales. Last week, the Massachusetts Senate passed what could become the first state requirement that home sellers provide prospective buyers with an audit scoring the home’s efficiency; several other states are mulling similar moves.
Realtor groups oppose the plans, saying they will slow home sales in a weak market. “There’s a lot of momentum to have some type of rating done at the time of sale, and it’s a very touchy issue,” says David Lee of the Energy Star program, an initiative between the EPA and Energy Department.
For now, most consumers simply want to know whether it is worthwhile hiring an auditor. While you can find some of the most obvious air leaks yourself, the more advanced exams look at everything from appliance efficiency to potential health hazards like carbon monoxide. They also compute annual savings from suggested fixes. The energystar.gov site estimates that sealing air leaks and adding insulation, for instance, can reduce energy costs 10%.
For my part, I vaguely knew where problems lie in my 30-year-old, two-story house in rural New York: in a breezy entranceway and a long swath of glass doors. My annual cost of heating and electricity had leapt nearly $900 last year to about $3,500. But I wasn’t sure of the cause or proper remedy. So I called in the pros.
My auditor, Chris Puleo, works for BPI-accredited Green Star Insulation in Danbury, Conn. Green Star sells cellulose insulation, which Mr. Puleo discloses on his business card. He calculated my home’s interior volume in cubic feet, wrote down model numbers of my appliances and examined my heating system – an oil boiler that pumps hot water through pipes along the floor.
The good news: Since I don’t have an attic, recessed ceiling lights or an unfinished basement, and I don’t have forced-air heat, which requires ducts, I lack several of the typically leakiest items. But my boiler is old, my industrial freezer guzzles kilowatts and costs about $200 a year to run (a surprise to me), and the hand-me-down washer/dryer set from my parents is horribly inefficient. 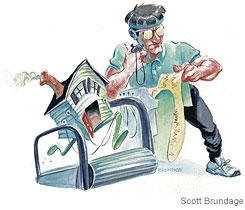 Afterward, Mr. Puleo attached a fan contraption called a blower door to my front entrance; that pulled air out of the house, letting the higher outside air pressure flow through cracks. He marched around the interior with a smoke stick, which created white smoke that flickered around offending electrical outlets and windowsills. “This is mostly smoke and mirrors,” he conceded. “I can walk in here and tell you most of what needs fixing, but it makes a good show for consumers.”
But the real “aha” came when Mr. Puleo’s boss, Joe Novella, arrived with an infrared camera that produced thermographic images of warm and cold areas; it’s a tool Energy Star recommends along with the blower door. Dark spots indicated where cold was creeping in: It turns out the metal frames of my sliding glass doors are terrible insulators – a culprit I’d never considered. Both men had flagged this earlier, but seeing it in Technicolor drove the point home.
That night, Mr. Puleo emailed me a 27-page report recommending fixes, many of them costly – replacing the boiler, buying new appliances and doors. All told, the upgrades totaled a whopping $45,289, which the report cheerfully noted would result in an annual greenhouse-gas reduction equivalent to not driving a car for 11.1 months.
Still, he pointed out cheaper ideas, like wedging a bat of mineral wool against my fireplace damper to quell drafts. And he gave me a short list of priority upgrades totaling $2,647 that would yield an estimated $578 in annual savings, such as sealing air leaks, tuning up my furnace, installing a programmable thermostat and replacing my clothes washer. The audit itself cost $299.
I’m glad for the new info about my house, and I’m already doing some of the simple solutions myself. Meantime, I’m hoping this is the only audit I will face this year.

Last week, the Massachusetts Senate passed what could become the first state requirement that home sellers provide prospective buyers with an audit scoring the home’s efficiency; several other states are mulling similar moves.

I missed our last chapter meeting but a discussion was held on IR and I guess the majority of the members don’t see any value in it. Oh well, less competition for me!

Oh well, less competition for me!

hmm…where have I heard that before?

This would keep me and my IR camera busy…