I do mold and home health inspections. I inspected the townhome of a very sick young lady who had previous mold exposure and she has now confirmed that mycotoxin levels are now back up. I found several pieces of FRT plywood used as attic decking and all the FRT pieces had visible mold growth (confirmed via microscopy). None of the OSB had visible mold growth.

Background: She purchased this home back in September, it was built 3 years ago. The home inspection report made no note of visible mold on the decking. She specifically requested that the home inspector let her know of any visible mold so she thinks it must be more recent. No photos were taken of this part of the attic for me to compare it to. The air handler is in the attic and has a significant air leak from the evaporator coil cabinet. It has soffit vents and a ridge vent.

My question is has anyone come across this before, where mold was only growing on the FRT? My theory is that during the winter, the home experienced about an inch snow (likely for the first time because the area doesn’t typically get snow) and the attic could have experienced an issue with condensation during that period. Maybe the ridge vent was blocked? My other theory is that the FRT composition did not allow the moisture to absorb into the wood so that it stayed on the surface and whatever retardant they used was good mold food. Just curious to know if anyone has run into this issue before.

My recommendations will be to: 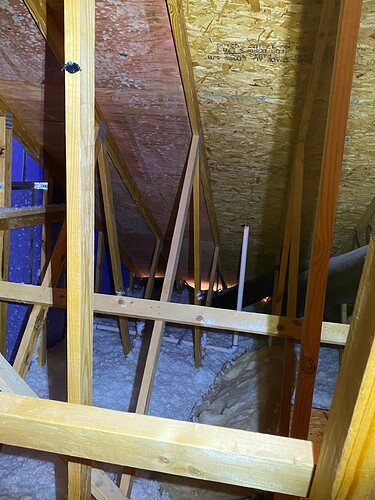 Houses are built to have no air exchange between the attic and living space. Obviously, that’s impossible and there’s some but not much. I just can’t see the attic in that picture making anyone inside the house sick. I’m often onsite with mold testing folks and have seen plenty of attics covered in mold and have air quality readings inside that are not a problem.

Yes, I have seen this once however my soffit vents were blocked at the same area. So, this material must have some food for the mold. Clean and sanitize, then possibly a coating (one that does not screw up the fire rating).

Air samples are notoriously unreliable for determining someone’s exposure to mold or the presence of mold growth in an environment. As a licensed mold assessor, I have seen plenty of cases where there was a visible mold issue and a low air sample-- it doesn’t mean that a person isn’t being affected by the mycotoxins and other mVOC’s. Her body is measuring for levels of particular mycotoxins that are produced by Aspergillus and Penicillium, which are the types that were found growing on about 200 square feet of FRT. I am a microscopist who analyzed mold for 10 years in a lab setting and I can tell you that one square inch of Aspergillus/Penicillium growth has at least 10,000 spores. Extrapolate that 10,000 spores/square inch into 200 square feet of building material and I believe that plenty of spores will become airborne under the right conditions. With the ductwork in the attic and the leakiness of HVAC systems and ceiling planes in general, I am certain she is getting exposed to some of this mold. There were a few other suspect areas as well, and those I have also pointed out to her. I don’t rely on air samples to tell me if a house has a mold problem. I look for moisture sources and visible mold issues and determine a scope of work to be done. My question is in relation to this particular building material, since I find it very interesting that only the FRT had growth. From what I have read, the fire retardant is typically some kind of salt, which makes the material hydrophilic-- so my theory is that it attracts available moisture and the wood provides the nutrients for mold growth.

She did have soffit vents and ridge vents and the soffits were not blocked… but I don’t know if the ventilation is adequate. I may have her consult with a roofer, just to be sure.

I don’t think air testing is reliable to make choices for remediation. I did do an air test and there were a few Aspergillus/Penicillium spores, but nothing earth shattering. I always advise source removal for visible mold… with HVAC and ducts in the attic, she does breathe from this space.

with HVAC and ducts in the attic, she does breathe from this space

I guess there is no such thing as zero since there will be some air passage from ductwork in the attic but it can’t be much. Is there an accepted/known amount of transfer from the attic into the duct system? I guess I’m thinking mainly of modern plastic wrapped and insulated ducts. I’m sure the old systems leak like a sieve. 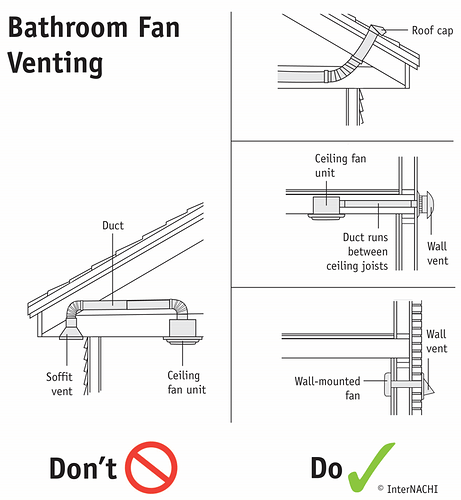 Mr. Fellman is correct. Drywall is a code approved air barrier. Without glaring beaches, the mold would not come in under high proportions. You have mold in an unconditioned and ventilated space, not exactly “indoor air quality” when outside the conditioned space.

You are correct to call it out, but you should be looking for the real mold problem should one exist.

It’s exhausting to the exterior. Though it did dawn on me that she has an infrared sauna directly under the attic hatch. While they don’t give off nearly as much heat/moisture as a regular sauna, they do get up to 130 degrees. The moldiest area is directly above this room.

In my experience, most duct systems are somewhat leaky. Though maybe I should recommend a blower door test. She did have two major air leaks in the evaporator coil cabinet where the refrigerant and condensate lines penetrated. I’m not saying this is the only problem she has, but she’s not planning to leave 150 sq ft of mold in the same space as her HVAC.

There are plenty of pathways for attic air to find its way into the living space. Between HVAC and plenty of recessed lights and other fixtures, there is no clearly defined air barrier between the occupied space and the attic. But yes, I don’t assume this is the only culprit, other avenues are being explored. My real question was regarding the FRT and the properties that might have allowed the mold to grow only on those particular panels and whether anyone has had an experience with that.