(Note: CBC does not endorse and is not responsible for the content of external links.)
Recreational drones were hot-ticket gifts over the holidays in 2015, with an estimated one million ending up under Christmas trees across North America — but the Wild West era of little regulation will end soon, says Transport Canada.
“This is a whole new dynamic world, and new people, new entrants into this industry are just not familiar with the aviation safety requirements,” said Aaron McCrorie, director of civil aviation at Transport Canada, in an interview on CBC News Network’s Power & Politics.

Concerned about reports of close calls and safety risks involving drones, Transport Canada will be strengthening regulations on recreational drones. (Alex Brandon/Associated Press)
Transport Canada’s current guidelines say drones should be flown at least nine kilometres away from airports, no higher than 90 metres above the ground and at least 150 metres away from people, buildings and vehicles.
But those suggestions can be tough to enforce. Last week, a recreational drone crashed into a car in Belleville, Ont., causing $1,000 in damage to the vehicle. No one was injured.
McCrorie said that incident is just one reason to raise awareness about drone safety and upcoming new regulations.
Canada’s laws haven’t kept up with the “tremendous growth” in the popularity of recreational drones, resulting in “dated” laws and guidelines that need to be strengthened, he added.
In May and June, Transport Canada asked the public for feedback on how to regulate drones and is now sorting through the comments before creating recommendations to be presented to Transport Minister Marc Garneau.
Canada looks to U.S. for ideas on recreational drone laws

Transport Canada is also looking to the United States as a possible model for new laws. The Federal Aviation Administration recently required drone owners to register their devices or risk a $27,500 US fine.
“We’re certainly looking at registering certain categories [of drones], depending on the level of risk, and we’re also looking at having markings on the models out there as well, so we can take law enforcement action if we need to,” McCrorie said.
Transportation Minister Marc Garneau warns consumers to use their drones ‘safely and legally’ in a Transport Canada video. (Transport Canada)
Currently Transport Canada can issue fines of up to $25,000 for improper use of a recreational drone, depending on the circumstances, such as whether a drone user is “wilfully violating airspace” or posing a threat to an aircraft trying to land, he said.
For now, McCrorie advises Canadians to visit Transport Canada’s website for safety recommendations.
“First and foremost, we really do want to educate,” he said. “The biggest challenge we face right now is ignorance. We want Canadians to have fun, but to do it safely.”

I take it you don’t like drones Roy lol

I take it you don’t like drones Roy lol

I have nothing against Drones Just want to try and get the Canadian facts out there so some one does not get a big Fine . 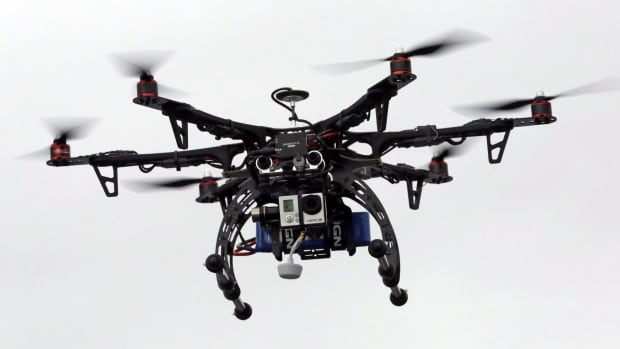 Police in Belleville, Ont., are warning drivers that drones could become a growing hazard on the road, after one of the airborne devices crashed into the grille of a moving vehicle on Monday morning, causing $1,000 in damage to it.

Yep it going to be a problem some idiots take to many chances , first it would be good to practice and get the feel of it read the rules , stay away from crowds , airports and so on .

Transport Canada to introduce new drone regulations
CTVNews.ca Staff
Published Monday, January 11, 2016 11:50AM EST
In response to the growing popularity of drones, Transport Canada is planning to introduce new rules governing their use.
After asking for input from the public last summer, the department says it intends to introduce new regulatory requirements, sometime this year, for drones that weigh 25 kilograms or less and are operated “within visual line of sight.”
The new rules will address licensing and training for drone operators, establish how the unmanned aircraft should be marked and registered, and create “flight rules,” according to Transport Canada’s notice of proposed amendments, posted online. ](http://wwwapps.tc.gc.ca/Saf-Sec-Sur/2/NPA-APM/actr.aspx?id=17&aType=1&lang=eng)
Current Transport Canada guidelines say that no drone can be flown within 9 km of forest fires, airports or built-up areas. Drones also cannot be flown higher than 90 metres, over military bases, prisons, crowds or in restricted airspace.
The existing regulations distinguish between recreational and non-recreational drone use. A special flight operation certificate is required for non-recreational drones that weigh more than 25 kilograms and are flown out of the operator’s line of sight.
Those who want to fly drones that weigh between 2.1 kg and 25 kg can do so without permission, as long as they meet certain exemption requirements](http://www.tc.gc.ca/media/documents/ca-standards/Info_graphic_-Flying_an_umanned_aircraft-_Find_out_if_you_need_permission_from_TC.pdf).
Flying small recreational drones is a hobby for many North Americans and usually involves short-distance flights, said Doug Marshall, a North Dakota-based aviation consultant.
Commercial drones are equipped with cameras and typically used for research or surveillance purposes and to capture aerial shots. As they became more popular in the last couple of years, they’ve raised privacy concerns, Marhsall told CTV News Channel on Monday.
“The privacy concern is a huge concern, not just in Canada and the U.S. but all over the world,” he said, noting complaints about camera-equipped drones flying over private properties.
Transport Canada says it will continue to work with the Office of the Privacy Commissioner to ensure that drone operators respect Canada’s privacy laws. A 2013 report from the privacy commissioner said that privacy “checks and balances” will be necessary as more people buy and use drones.
Transport Canada says the unmanned aircraft industry has grown exponentially over the past few years. In 2012, the department issued 345 special flight operation certificates to drone users. By 2014, that number jumped to 1,672.
The department also cites safety issues among the reasons for new drone regulations. Since 2010, Transport Canada says it has investigated some 50 incidents involving unmanned aircraft across the country.
Still, Marshall said that Canada has been ahead of the curve when it comes to drone regulation in North America. regulations and procedures for approving drone operations in place well before the U.S. has,” he said.

I wonder what would happen if the drone was tethered like a kite. I thought if I ever picked one up I would do that so it can’t get away from me. I’m possessive like that.

I wonder what would happen if the drone was tethered like a kite. I thought if I ever picked one up I would do that so it can’t get away from me. I’m possessive like that.

I was thinking the same thing lol