Ok. who is the pro out there??? What materials can and can’t be used for gas lines? What fittings and connectors can be used. What is the best source of info on the subject??

It depends on where you are. Contact your local authority…it all differs from one jurisdiction to another.

Copper is not permitted in some jurisdictions because of certain chemicals in local gas supplies.

In all cases you should check with the local fuel supplier and AHJ for gas appliance installations.

What is acceptable can be different in diffent areas (states, counties, townships, etc.)

I’d check with your local AHJ or gas utility companies.

Lots of information it is 121 pages but much information .
http://www.questargas.com/brochures/59060_401.pdf
Roy Cooke

or Call your local gas company

I saw this on a house I inspected Wensday. I know some jurisdictions don’t allow cooper tubing for natural gas but what about supporting the line itself.How would you guys write this up? The looped line is the gas line going up thru the floor connected to the stove. 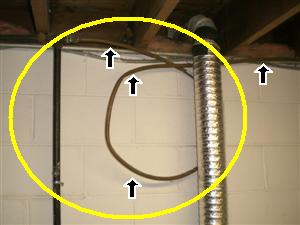 Not seeing the rest of the line, it’s tough to say. But something like The line does not appear to be properly secured or The line may be subject to damage. Don’t forget when in doubt recommend a second opinion from a qualified gas guy. The loop itself is not a concern.

Thanks Ron, thats pretty much how I wrote it up. That the gas line was not secured properly. I’m a newbie still trying to learn the best way phrase things.