Reporting of Pet and other Odors

I’m sure all of you have walked into a home…and the first thing you notice is the distinct odor of pet urine. How do you guys go about reporting this? Or do you?

You would think that any buyer would be just as aware of the smell as any inspector, but I really think this should be mentioned in the report whether they are with you at the inspection or not.
Many times pets (depending on their habits) can cause unseen damage or in many cases a costly replacement of the homes carpeting to get rid of the smell. In some cases I have seen where parts of the floor sheeting needs replacement.

And what about a home that you inspect that has evidence of heavy tobacco use? (this would be a deal breaker for many people…and not just in Utah)

I am actually thinking of adding a place for odors on my reporting software’s template.

In the case that you are doing an inspection for a seller…This could get touchy…(kind of like telling them they have bad kids) but I still feel this should be reported.

Do you see it in here?

Learn about the standard practices for performing a home inspection. Visit today to see InterNACHI's complete list of what you need to evaluate.

If you smell it… report it.

I have routinely noted odors of cat or pet urine with a recommendation for cleaning / remediation.

Have on one occasion reported Death Odor in a home as well.

This article describes how to avoid or minimize allergic reactions caused by pet dander.

Be sure to bring your Allergist with you.

Be careful how you phrase it.

Depending upon how long you stay in a 120 degree attic…“Is it me, or does it smell bad in here?” … could be answered “Both.”

Smells can be deceiving. Never put in writing what a smell is because you can be easily wrong. The client has a nose, let them use it.

Evidence suggests one or more domestic animals occupy the residence, which can have an adverse affect on air quality, etc, and require extensive cleaning of walls, floors, air ducts, etc. We will not comment further, but do read the disclaimer at the beginning of this section of the report.

RR how would you report it or would you?

Please report it! I think as someone who might have animal allergies or any other allergies which can be caused by smell, I would want to know. If there is a smell then you never know what else there might be. If someone has an asthma attack or an allergic reaction because you did not report it, then I would not want to be slapped in the face with a lawsuit. You never know how sensitive some people are to things in the environment and home.

I guess this is what I am trying to avoid. And probably should use generic words, as in much of our reporting, like “Evidence of”, “Pet” (not cat, when may have been a goat…)

Pet odor that I may consider “Strong” could be hardly noticeable to some pet lovers. Or it may even be considered a ‘major defect’ to a person with some serious allergies. I would almost guess that a client (buyer) would probably mention this when they first contact you. And if they where not able to attend (or relocating to a home, sight unseen) they would ask you to be sure to make note if there was evidence of pets, tobacco use…etc in the house.

Some good ideas, thanks.

“Home has un-natural odor from unknown source. Thoroughly clean and monitor for re-occurance”.

You of all people should understand Joe’s “strong” and “significant” opinionated words that should be best left out!

I deleted my post, you bunch of ingrates. :twisted:

Did a row home a couple of years ago the urine odor in the master bedroom was practically intolerable. The carpet had already been ripped out (stains in the plywood subfloor). I thought it was a cat, Realtor tells me it was the old lady that lived there. That’s the way it went in the report, “Realtor says…”

I have a little hand held black light.
You should see the CRAP that shows up if I wave it around.
Not part of my report but if the odor was obviously heavy IMO it’s report-able.

I’m not going to ignore pet odors or wet spots. I’m going to report what I observe.
I know it is “beyond SOP”, but that’s how I roll.

Check out this carpet in a house that had two large dogs. The customer was glad I took these pictures. 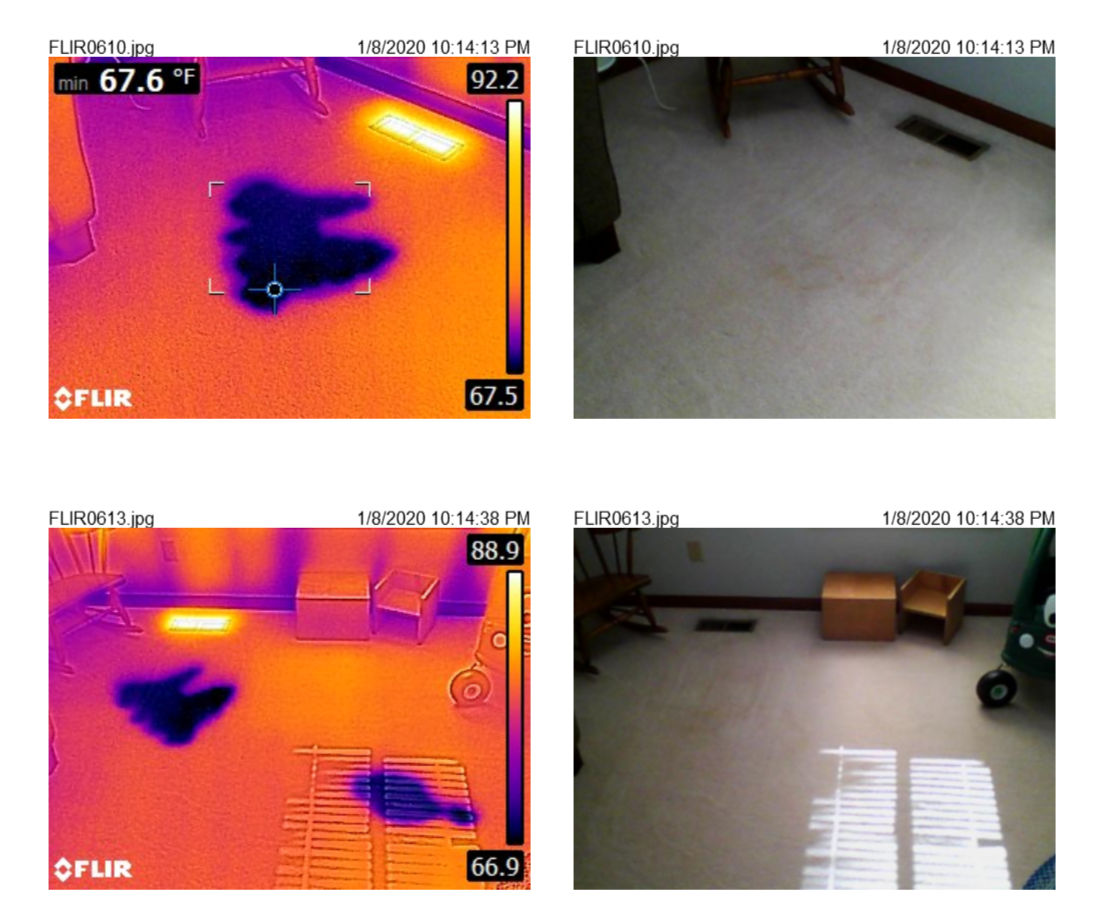