Timer for what purpose?

Anyone recognize this timing device? It appeared to me at first to be for an irrigation system, but there were not pop-up sprinkler heads in the yard anywhere that I could find.

I can’t see the photo, but sometimes bathroom fans for ventilation are on a whole house timer or a hot water heater to save electricity. Does it seem like it would apply to either of those? 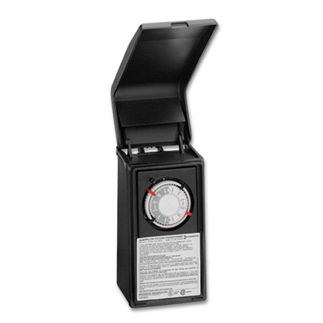 Saw that on friday inspection for a Garage, however I do believe this one is garden or outside lighting.
I have that set up also for timed patio lights.

Kevin - I believe you may be correct. I just couldn’t find any sort of outside landscape lighting or irrigation that it would support. Of course the vegetation was a bit out of control, could of been beneath it somewhere. I did find a receptacle on a GFCI circuit out at the corner of the driveway that had a busted plastic cover over it. I would imagine every time they got a heavy rainfall this thing was tripping inside.

At my old house I had that exact timer - it was for low voltage lighting.

I have 4 of those mounted at my house. Why, I have no idea. Whatever lights or devices they were once connected to had long since fallen apart and been thrown away before I bought this house. And 7 years later, they are still sitting there mounted on a wall.

Given ASHI SOP doesn’t cover low voltage items, I’m pretty sure my home inspector at the time just ignored them.