How excited does anyone get seeing ABS cemented to PVC? I had an inspection today with one oddball ABS elbow.

Not excited, just comment on it, and deferrer to a qualified plumber.

thanks for the input.

Depends on how it was done. Most plumbing codes don’t allow ABS pipe to be solvent-welded (glued) to PVC. The proper way is to use a transition coupling, a neoprene rubber sleeve that fits over each pipe.

If that’s the way it was done, no comment needed.

If it was connected w/o a transition but doesn’t leak, note it. I recommend monitoring and repair if it ever becomes necessary (many never will) :mrgreen: 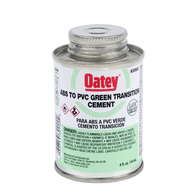 This is one kind

If it’s not leaking, I don’t mention it. I used to, but changed my view so that now I consider it unfair to recommend someone pay $$$ for a plumbing repair on a pipe that is not leaking and may never leak. That plastic drain will last longer (probably) than cast iron and we see that every week and don’t recommend an evaluation of it.

When we installed a new 90+ gas furnace it was vented with PVC to ABS using the approved cement. City inspector just asked if we used the correct solvent and I showed him the stuff. It was good to go.