Found a bunch of these in my driveway and so had to walk around them tonight. 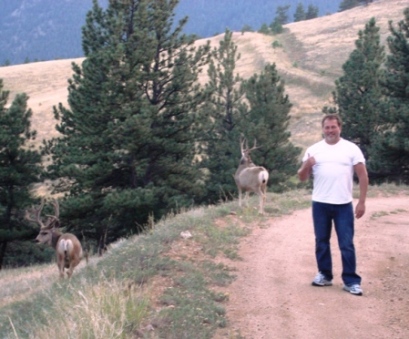 Careful Nick. You’re the only one in that herd with antlers…:mrgreen:

I am happy for you!

You win the InterNACHI award for the most timely joke ever posted. Gotta know your politics to ‘get it’ though.

P.S. I’m a big animal rights activist and so it hurts to love everything else about Sarah so much.

You win the InterNACHI award for the most timely joke ever posted. Gotta know your politics to ‘get it’ though.

P.S. I’m a big animal rights activist and so it hurts to love everything else about Sarah so much.

I couldn’t pass that one up.

That is a great picture Nick. It sure looks peaceful.

I live with bears and let me say, they are the worst. Sneaky, very quiet, and aggressive… and I’m only talking about black and brown bears. A polar bears is more like a Grizzly. Glad I’m not on an Alakan pipeline maintenance crew. My driveway is scary enough.

I don’t like cats but the mountain lions aren’t so bad. About once a week I walk past one going the other way in broad daylight and they don’t even look you in the eye… just don’t freak out and start running… like your little kitten at home… they can’t resist anything moving fast past them. Mountain bikers up here get knocked off their bikes from time to time before the lion comes back to its senses. I have the same problem when I see a pizza delivery car and so can relate

Nick, before the picture loaded, i reallly thought you were going to say

How much land do you own?

How much land do you own?

I’ll tell you my little secret to ending up with thousands of acres for nearly nothing. Don’t tell anyone.

There are 9 states where mining law rules supreme. Colorado is one of them. Back in the 1800’s a fella would stake a claim, build a shack, and work it for gold. By the prudent man law, if he could feed a family of 4 with the gold he pulled out, the government had to give him his little piece of land. There are thousands of these little pieces of patented (real property) surrounded by government land. The government owns more than 1/2 the land in the U.S. Anyway, gold became illegal to own and so all the little miners quit looking for it. Their little properties still exist and no one wants them because they think they are land locked within federal land. I set up a company and bought a bunch of them for next to nothing. Then I went down to the BLM (Bureau of Land Management) and filed mining claims all around them, thousands of acres. I filed both placer claims to get the surface rights and then cross claimed them all with my own lode claims so that I own the mineral rights tool. A mining claim is the only property in the world where the owner of the claim’s right to access is protected by a federal government. If anyone gives me any crap I call a Federal Marshall and he escorts me to my property. If I have a legal issue, the local Mining Association rushes in for me. They protect my rights because they don’t want anyone to challenge theirs. It is awesome. And I control both the surface and mineral rights to entire mountains. You can’t build homes on them but you can on the little pieces of real property within. Imagine, a piece of real property with a home on it surrounded by thousands of acres of mining claims where you control both surface and mineral rights, and have federally guaranteed right of access, but don’t have to pay a penny in property tax (just on the little patented piece). I’ve essentially built my own estate.

Anyway, I keep my non-InterNACHI businesses pretty private but since you asked… I put together packages like this for folks who want it. I also file mining claims for people (ATV enthusiasts, hikers, gem panning clubs, paint ballers, or just people who want their own hunk of a mountain for whatever reason).

It’s hard work, I have to do legal work & research, I have to do surveying (made easier with GPS these days) & staking, I had to learn how to file a mining claim and affidavits of labor at the BLM and get them recorded at the county level, etc., etc. It requires a very odd set of skills. I have one full time employee, a retired professer from the Colorado School of Mines which is nearby and I take him with me on the staking just in case I get hurt or lost.

Anyway, there are only a handful of guys in the U.S. who do what I do and I charge $3k per 20 acre claim. When a client desides to abandon his/her claim I can usually sell it for them in a day or 2. It was tough to figure out at first, but I’ve gotten good at it over the years. It’s a good business, it gets me out into the woods, and I have clients from all over the world including many very famous movie stars who have me file claims around their properties as buffers. I’ve never had to spend a penny in advertising.

It’s fun. Not as fun as InterNACHI but fun.

Also, if any of you InterNACHI members or your families want to come out and try your hand at panning for gold, I have all the equipment and the mining claims. I’ll hook you up no charge. I have a little jar of nuggets that I’ve found over the years and they are beautiful and fun to hold. So heavy.

Anyway, email me if you are out this way and interested in giving your kids a good time.

Awesome, unfortunately, I cannot go up there anymore. I dream about it though!

Tiny little things you got there. I only only have pictures of the harem. The big boys were in the trees.

Those are not just any deer, their watch deer. Just like a watch dog, but much more discreet and no one knows there even on the job. Their doing their job in the picture, keeping an eye out for any NAHI members that might come snooping around to see if Nick is abiding by that ridiculous law suit.