All due respect here to Mike, he may indeed be a good HI, wrong imo on some statements/claims here which he apparently will put in his written report and some he may not have, and should have

Sure, later he edits (3:50) and says, Typically what is going to happen is the crack will be filled with epoxy…inside and out.
Note-- not all epoxy injections last, some don’t last long at all (link-photos below)

2:45 he says, this is a problem but it’s correctable if you extend the discharge line (sump)

Well, he just brought up that, sometimes it rains long and hard so, while a short-discharge line and the water from it emptying close to a wall doesn’t help, the water from long hard rains alone or, thaws, saturate the soil along a wall and that alone can cause vertical or horizontal cracks.

Many vertical cracks are caused by ‘other’ things, one is lateral soil pressure so I wouldn’t say/write in a report (sure you can, go ahead) that a certain vertical crack was caused by settlement.

Back to his video, and just trying to point out a couple things where one could get sued for wrong statements/claims/causes of cracks etc

Ok so he brought up the possibilty that the vertical crack maybe sealed w/epoxy, I wouldn’t recommend that and, does he mean the outside of crack/epoxy would be done…only at the top (no digging) because, that is what some do.

So, what about the horizontal crack? Leave it alone, don’t mention it, don’t waterproof it?
Some vertical and some horizontal cracks DO, get worse, widen, whether someone adds a 10 mile long downspout ext or not, whether they add a 100’ long discharge line for sump pump, or not.

Might want to put that in your inspection report and maybe recommend to potential buyer about epoxy injections and, have the seller fix/waterproof the horizontal crack or, bid LESS

By the way, he doesn’t mention anything about exterior waterproofing. Does he, like some HI’s, have a Uncle in the furniture business? Check that, a buddy in the foundation repair biz that does epoxy injections? Just saying.

That’s a SHORT dig, wouldn’t cost much to hand dig and waterproof that little thing.

Interior injections for poured wall cracks, not block, not brick, poured only and you still need to cross your fingers in hope the injection is done correctly and lasts! Not like this one, photos…
http://picasaweb.google.com/101049034584960315932/BasementWaterproofing91
click any photo to enlarge that photo.
The inside system clowns claim their injections go…all the way THROUGH the crack, to the OUTSIDE.
Well, I have yet to see one that did, 35+ years and it didn’t go through to the outside at this house either photos 11,12,13… nope.

Some HI’s may also want to inform buyers that it’s highly unlikely the exterior foundation walls were waterproofed and backfilled correctly when built. Looks like someone sprayed on thin-watery cheap damproofing junk here/video, it doesn’t last.

Almost all crawlspaces here in Mich we’ve seen were not even parged outside, they have zero protection. Just like this one in St Clair Shores MI, multiple exterior cracks and other openings/gaps which is why the crawl leaked and why there was some mold in crawl
http://picasaweb.google.com/101049034584960315932/Crawlspace click any photo to enlarge

Wonderin’, do some home inspectors inform buyers that the house he/she just inspected that has a crawl, very likely was not parged, not waterproofed etc on the outside or is this another thing overlooked, never mentioned, doesn’t matter, it’s not important?
Is a working, ring-a-ding-ling door bell more important than no parging etc on crawl walls?

Let’s see, does the door bell work or not? http://www.youtube.com/watch?v=ROsymjaJ3OY Yep, ship-shape!

Home inspector warned of moisture in basement.
Good HI’s would have been more helpful to buyers in situations like this.
http://aaron.ca/columns/2003-05-10.htm

Most HI’s should know that there will always be some-sellers who will try and hide defects, such as a leaky basement are, a crack in wall etc.

Some will put up paneling etc or other times paneling/drywall is already in place. Some paint the walls and -or fill in existing cracks with all kinds of stuff.

So, when a seller says something like their basement supposedly flooded twice or, is damp, or has been wet 1+ times in the past, why not ask… where? In what area (s)?

Many sellers will be as vague as they can if there are 1 or more leaky, moldy, questionable areas in the basement.
They won’t say or write on disclosure, ‘where’… usually. Least that’s what I’ve seen.

So when they don’t, ASK!

Example, if they inform you that one area has been wet/leaked such… as at or near a corner and the basement is finished is that area, ask them to REMOVE 1 or 2 pieces of the paneling or, cut a little drywall out in order to get a better look/idea of what’s really going on in that leaky area. Good HI’s will do this, recommend it. The not so good HI’s don’t and might recommend incompetent crap such as, ‘just raise and slope the grade and you’ll be fine’, nonsense.

How difficult is it to remove or loosen 1+ piece of paneling or cut a little drywall in order to competently-inspect the wet, damp area 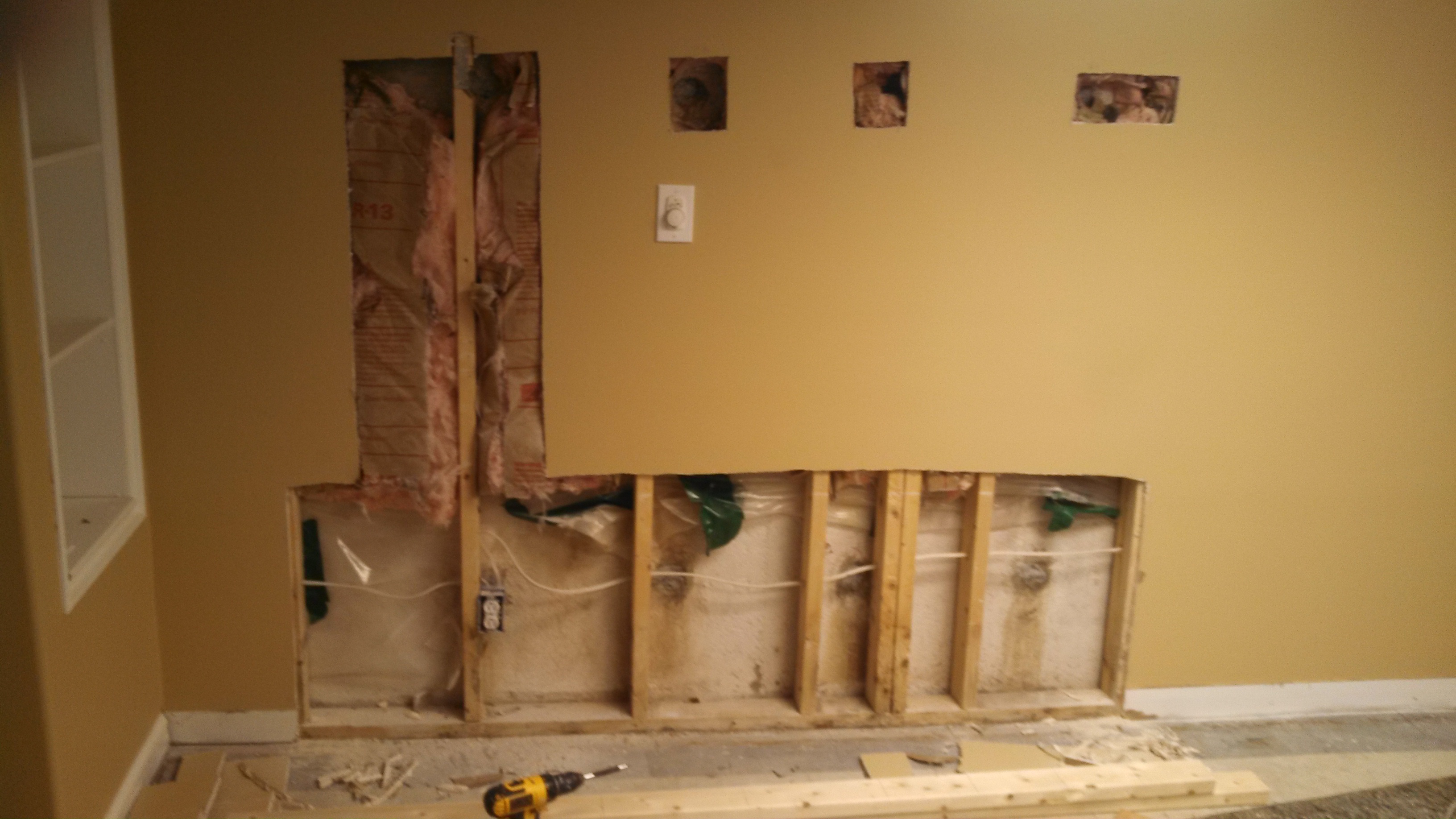 Yeah yeah, some don’t think this way, but if a seller truly wants to know that area is wet/leaked or have enough concern for a potential buyer, they’ll remove a piece or two or allow a buyer to.

Another thing buyers can do IF a seller doesn’t want to remove any paneling/drywall (in an area where basement previously leaked, was wet etc) is, ask them if you can run a water test with a hose…on the outside of the area that previously leaked. If you do the water test correctly and run it long enough, you WILL find out if there is a crack etc in the foundation wall BEHIND the drywall etc.

Don’t get me wrong, it was good the HI did state what he did. However, according to the article, the HI apparently said ‘future repairs MIGHT be needed’. That too is a bit vague. ‘MIGHT’ be needed. What’s that really mean?
Would be best for the buyer to know whether repairs are needed, or not. And, how much $$.

Mold and crack in wall
http://picasaweb.google.com/101049034584960315932/BasementWaterproofing25#5443042283427892578
Had someone else told her, other homeowners, to just raise and slope the grade or extend downspout ext’s further away, then the existing defects/the actual problems aren’t correctly identified, and not fixed.
The area would continue to leak every now and then because there was a crack and deteriorated rod holes plus, the mold would get worse.

Some sellers are worried, don’t want, anyone being intrusive because… they don’t want anyone to find the problem, they want to kick the can down the road. Some don’t want anyone to find the problem because maybe they don’t have the money to fix it. Understandable, but the buyers may be willing to get it waterproofed correctly so the buyers wouldn’t have to spend anything, just lower (cover) the repair costs.

And further, some may think they will get talked into, need to spend many thousands of dollars on the leaky area.
Nope, not always true, just depends on what the actual problem is.
Cost to correctly waterproof this lady’s problem was around $1,200 so not all leaky basements are going to cost $5,000, $15,000 etc. Some think that though.

If they did have just one or two leaky areas and they called an interior bubblehead over for estimates THEN, yep, they may indeed get est’s around and over $10,000 because these clowns will often talk you into a full perimeter system even when a homeowner just has 1 or two leaky areas.