I looked at a deck yesterday that stood about 15’ above the ground. First off the deck does not have sufficient connection/ flashing to the house-lag bolts every 6’ or so. So I will be requesting further evaluation and repair already.
I am also concerned with the front carrying beam and the connection to the posts. As well as the sonotubes on the hillside. The built-up 2x12 carrying beam is just toenailed onto the 6x6 posts with (2) 2x “plates” on top (probably did not meet correct elevation?) My concern is that there is nothing to resist twisting and rolling of the carrying beam. I was hoping to get some other views/ thoughts on this.
Ideally, a post-to-beam connection would have been installed during construction. Would a “stretcher” a 2x screwed to both the plate/carrying beam and post suffice to brace off the carrying beam? (I am not prescribing a repair, want to know if that was in place, would it have been acceptable). I see this often on lower decks- a carrying beam dropped on top of posts with no real good connection. This height of a deck worries me a lot more.
Also, this deck is an egress exit for an apartment above a garage space.
Thank you in advance 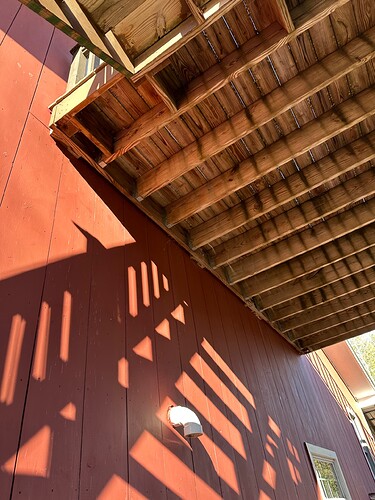 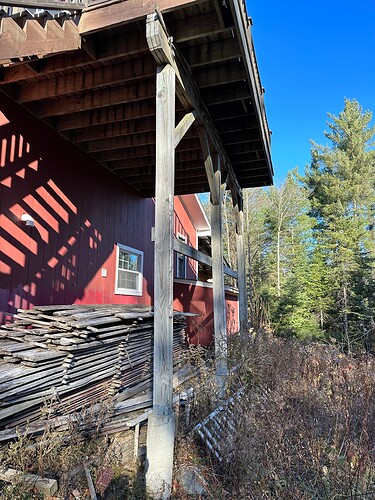 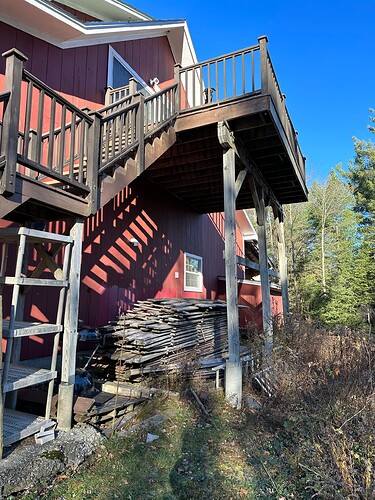 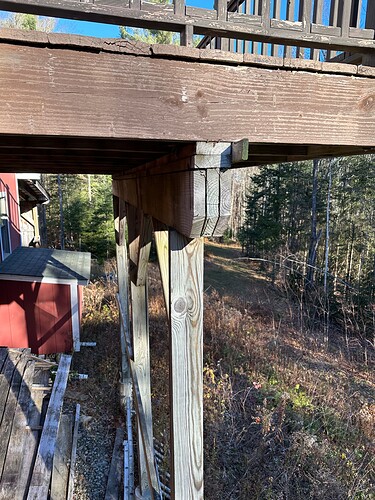 I was hoping to get some other views/ thoughts on this…

In my opinion, the toenailing can suffice if done well. Were the joists toenailed to the beam also?

The ledger connection is very bad and would be my main concern for the report. Also, footings look undersized and it would be best not to have the diagonal bracing on the center post.

So I will be requesting further evaluation and repair already.

IMO, there are so many things wrong with this deck that correction may not be economically reasonable. Replace due to numerous safety issues.

Holy smokes! hope you yellow taped the entrance to that “deck” !

Thanks guys for the response. I felt the same way, wanted to verify that I was not over exaggerating the severity of the deck. This house was not a real estate transaction, but an inheritance that the (now deceased) father built. I know the owners (his children) are hesitant to accept that anything could be wrong with the deck. One of them stated the deck has been there for the last 10 years so why would it not last another 20-30 years. This has been a source of income for them for the last year since he died. They quickly Air BNB it out with so many safety violations.