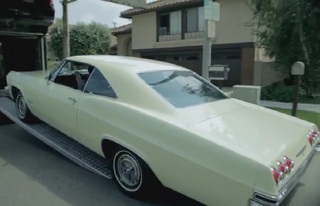 We’ve mentioned before this year marks Chevrolet’s 100th birthday. It’s a milestone, sure, but we weren’t particularly excited.

Then we found out about the “True Stories” ad campaign Chevy’s running as part of the celebrations. It kicks off with this one, a short video about a pair of sons who recovered their dad’s old 1965 Chevrolet Impala SS and gave it to him as a surprise.

Herb Younger of Arizona bought the Impala new in 1964—his dream car, but also something to haul his new family around in. But in the '80s, he sold it off to pay for his sons, Derek and Jared Younger, to go to college.

Five years ago, the siblings worked together to try to track the car down, though it wasn’t easy. They used a VIN search to track down the owner’s address in Pennsylvania, but he didn’t get back to them until he’d sold it. The car changed hands several times during their search, quickly moving state to state, and the sons were always two steps behind.

They pinned down the car’s latest owner in Maine, who told them, “You just missed it. A group of Canadians came down, and loaded it on a flatbed, and drove it to Canada.” The boys figured they’d never be able to track it down after that.

They were almost ready to call in a private investigator, when one last general Internet search told them the Impala was in Montreal. Got it.

After buying it from the dealer there, the younger Youngers talked to Chevrolet about getting their dad’s reaction on film. They told Herb that the camera crew was shooting a piece on three-generation families when—well, you got to watch it.

I’ve got to warn you, it almost made me tear up, and I’m not even a Chevy guy. If the other True Stories are anything like “My Dad’s Car,” I’m going to have invest in some tissue.