What's the truth with ThermApp?

Okay, I know specs can be manipulated. What’s the story with this camera? Android ThermApp IR , The specs look impressive, but I don’t believe it. http://therm-app.com/

Here’s a Flir with very poor resolution for $799.

Here’s a Flir with very poor resolution for $799.

It’s not about spending the exact same amount to me. I’d rather spend more to get a proven product. At the end of the day something that you plug into your phone looks hokey in my opinion.

I don’t think I would use this as a thermal camera. It seems like this would be more used as a camera when you are hunting in the woods at night. Nothing replaces a flir or fluke.

Don’t you have a Flir BX60? Are you curious about this product? Just wondering.

It looks like it might be a nice step in the evolution of these devices. I think we will see smart device driven imagers displace most of the general purpose thermography devices that we see in use these days. The evolution should have great benefits for users, not just in cost, but also in usability; upgradeability; more dynamic software advancement; less-proprietary formats; greater processing power; greater communication and integration capabilities, etc.

The existing quasi-monopoly on functional general purpose imagers may be near the end of its course. We should see more decoupling of cores from proprietary chassis, firmware and software. No more $50 lens caps because they have a special four letter brand name associated with them, when the same cap would be 1/10th as much in the photography realm.

Just looking at the specs of the new Therm-app, appears pretty interesting. It reportedly has: a manual focusing lens vs. fixed (though it’s only wide angle), adjustable span, some limited thermographic parameter control (emissivity and reflected apparent temp), it appears to capture radiometric data (though it doesn’t actually state that it does), sensitivity is in the 70mK range. Software??? (they say they have reporting software) On paper, it certainly appears to be capable stomping most of the bottom end units HIs keep buying. That lens is awfully tiny though, especially if you put it next to an old workhorse like an EX320

and the 8.7 Hz frame rate would pretty much disqualify it as a daily use imager for me.

I’m anxious to see what kind of developments will come in the next 2-3 years from non-traditional sources.

If Nick wants to buy one, I’ll do a review of it. Might even send it airborne :mrgreen:

I sent them an email with questions: length of warranty, support in the US, etc… Frame rate would be a bit slow, but …
Will let everyone know when I receive info back.

I don’t think I would use this as a thermal camera. It seems like this would be more used as a camera when you are hunting in the woods at night. Nothing replaces a flir or fluke.

Don’t you have a Flir BX60? Are you curious about this product? Just wondering.

Hi, I have read the info of this Therm-app before, I was impressed by this until I have watched this youtube video

This Therm app cannot measure tempature accurately, while it may not be a big deal for some cases(just some cases), it gives me a not so good impression. What about if there is an argument between the user and the customer? Olgal does not need to take any responsibility but can just say: you had better have your smartphone checked. Or, the app is not approved to perform professional judgment. Then the user will be in hot water.

Just my feeling about this tool. Also, I have already used to view with Flir MSX feature!

Here is the response I received back from Therm-App: my questions are in ( )

Roy Israely (Therm-App)
Dec 23, 21:11
Dear Charles.
Thank you for your interest in Therm-App.
Per your questions:

Too much money for what it does. Resolution isn’t everything.

I would say that if you showed up at my home and did thermal with a smart phone I would think you were a chump punk wannabe.

Unless your just gonna wave the tool around and make announcements, then I guess I would be ok with your smart phone IR as long as it was offered free.

You are right about that!

In my previous occupation one of my supervisors who was also a licensed teacher who taught our apprenticeship program would often say “The day you think you know it all is the day we no longer need you”.

Too much money for what it does. Resolution isn’t everything.

I would say that if you showed up at my home and did thermal with a smart phone I would think you were a chump punk wannabe.

Unless your just gonna wave the tool around and make announcements, then I guess I would be ok with your smart phone IR as long as it was offered free.

I’m interested in learning about IR, but don’t know much about it at this point and very little about cameras, so I’m an expert on the homeowner (know-nothing) point of view. :mrgreen:

If after talking to a number of inspectors I hire one because I get the feeling that he knows what he’s talking about, he has good references, and I like the information on his website, when he pulls out a tool or an instrument during the inspection, I’m not going to second guess him about his choices. I might comment or ask a few questions about a thermal imager that looks like a smart phone, but I wouldn’t assume that I knew more than he did about his business.

So I’d say this thread is about the qualities of the thermal imaging device, not having to impress clients with complicated-looking equipment.

That’s a cross between a Fluke and a Flir.

I have had this passing thought in the past about using a phone to do reporting on site. What does it look like to the client when he sees me using a phone vs a SLR? At least it’s not a flip phone I guess…

If you are doing a $1,500 job and pull out an iPhone, I do believe the client would think, “Why couldn’t I just do that?” at least once!

However, the important thing is the scan results.
I have found things with my T640 that I could not see with my T400, never mind throwing in an IR toy into the equation.
(I am not saying you need a $30k camera to do stuff, but every camera has it’s application and building science is not an easy application to intentionally skimp on.)

Sorry Bob, I don’t have the time to research every toy that comes out (unless it’s for my own application, I have no dog in that fight.). I did play with the Flir cameras at convention and proved to myself and the dealer that there are significant differences between cameras and applications.
I had a Canadian Lvl III step in on my clinic to reiterate that these “phone cameras” are NOT for the application I was answering an attendee’s question about. Not something one Lvl III does to another unless “it matters”.

Thermal Imaging is more about Interpretation of a thermal scan than taking one.
If you have used a really good camera, you will learn to pull out exceptions in the scans you take. If you use the improper equipment, you will never learn to pull the vague exceptions from using that equipment.

After using good thermal equipment, there will come a point when you need no thermal equipment at all to find exceptions!
Very often I feel bad that I was called in for Thermography work when I could just look at stuff and see what is going on (but I don’t feel that way for very long!).

Recently I have come into numerous jobs where I’m informed that someone already did Thermal Imaging! “So, what am I here for?”
Because they didn’t solve the problem. Why not?!
What does the client think of the previous contractor when they spent good money, only to have to pay even bigger money for me to solve the problem in half the time?
Do you want to be the one in that position?
No matter how much good you have done in the past, one “oh crap” wipes it all away!

Here you go.
Another great app with a crap camera… 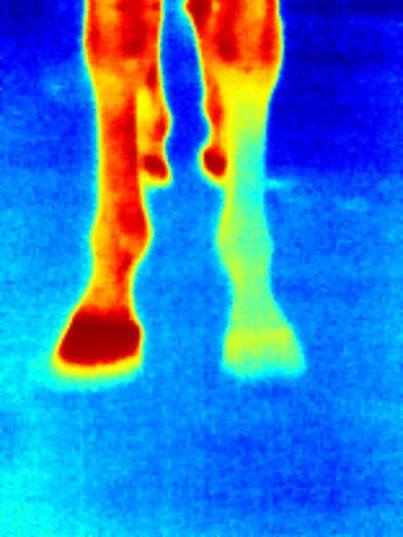 An infrared tech friend gave me his feedback… not too good IMHO… considering the cost.

I’ve done some research on the Therm App. It looks like it’s being manufactured out of Israel by OPGAL and is compatible with Android Smart phones. Their USA office is in GA.

I do not know if the images can be adjusted after they are recorded (I’m still looking for data on the software capabilities). All the FLIR images can be post processed for temperature settings and measurements using the free FLIR software.

I will get you a formal comparison once I have the complete specs from the manufacturer.