Anybody recognise this insulation?

Never seen this before. This was in a house that was built in 1958…It is brown and looks like sawdust to me. See photo…Thanks. Greg

We had a similar product up here in the Pacific NW. It was called Silva-Wool and was manufactured by Weyerhauser. There were probably similar products manufactured by the different wood product companies like Louisiana Pacific or Champion. It was shredded wood waste that was treated with fire retardants which is what gives it the rusty brown color.

Most of the time there is a limited amount and additional insulation is put on top of this product to raise the insulation standards.

Looks closer to what Steve said Silva Wool.
Hard to tell without a close-up. 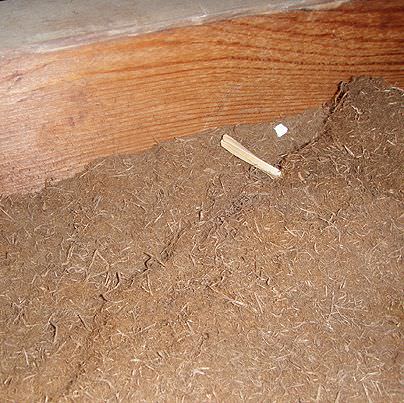 Next question everyone asks is “but it is flammable how can that be OK”?

Yeah so is the structure.

You just wake up Marcel?
Had no idea there was such a big time difference in New England…Must be the Steven King effect…

Looks closer to what Steve said Silva Wool.
Hard to tell without a close-up.