The sagging, if there is any, and there may not be once I get there and see it up close, is one the first things that caught my attention, and I can see that there barely is any pitch to this roof, and none of the exterior pictures I’ve viewed actually show the roof itself but does also look very low pitched. And there does appear there may be some staining in the sheathing closest to the top of the photo, although it could be some kind of print in the sheathing too, it’s not very clear. I’ll see it tomorrow!

Be sure to follow up with us with more pics and any findings!

Well, there is your pitch, eh? Aint much

Well, there is your pitch, eh? Aint much

It’s basically a flat roof in my opinion. Hopefully not with asphalt shingles.

It’s basically a flat roof in my opinion.

Hopefully not with asphalt shingles. 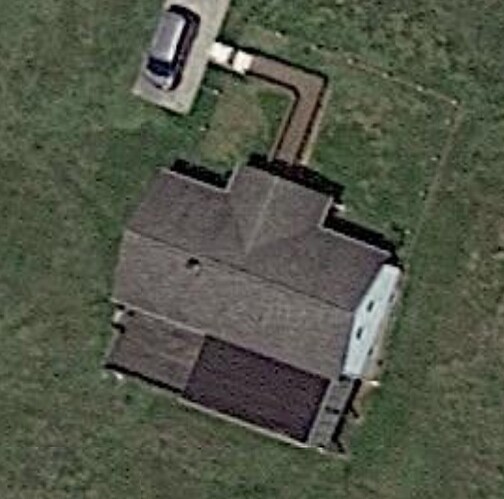 Kinda grainy. What do you think @jfudge? Almost looks like a membrane. I wouldn’t bet my paycheck on it though.

Those 4x4 posts and 2x4 “beam” are doing next to nothing structurally. Likely a DIY fix attempt by the homeowner (installed over the flooring materials, for example), not original to the patio/deck design. I am thinking the original porch design was for a flat or minimally-sloped roof with little consideration for possible snow loads or adequate drainage (i.e. a poor design). I would be looking for evidence of ponding on the roof.

The snow load for that house would be 25PSF plus additional drift loading due to the low slope roof attached to the higher gable roof. I doubt that roof framing would pass or the connection at the house roof. I suspect that temporary support was placed due to a roof sag. That location corresponds where the heaviest snow drift load would be. 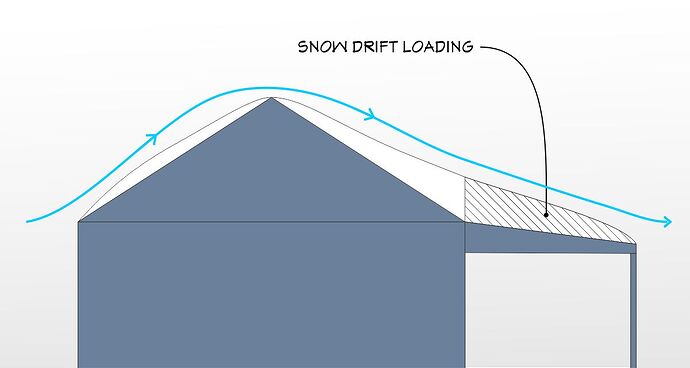 Hope no one is at those tables if they think those 4 toothpics are going to hold up a snow load in Virginia that most likely would be wet snow.