Any thoughts on this?

Got this in an email from a client. (We haven’t actually attended to have a look at this in person).

“We found a surprise Sunday when a small amount of water appeared on our basement floor. When I chipped a concrete cap off wall I found weeping tile-through wall but filled with concrete. This is located directly below the back door. Do you have any idea why that would be there?” 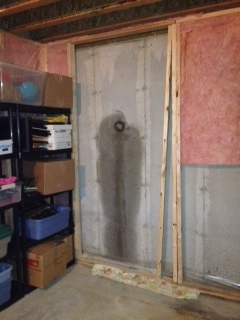 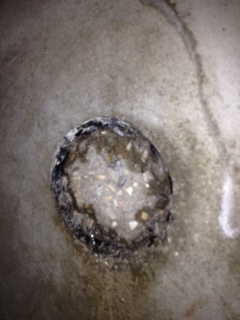 It looks like the block has become saturated at that level. It probably needs waterproofing from the outside.

Hopefully john bubber will be along and provide some experienced, helpful input

Looks like they once had a drain there and needed it .
Most likely the area in front of the door is graded that way and needs the drain.

I would run a water-test with a hose on the outside before any homeowner spent 1 cent.

Staying on that pipe/whatever, it could be no crack occurred IN pipe and there already was/were 1+ openings in pipe, at end of pipe etc and they thought they could epoxy/caulk/fill pipe from the inside (wrong-won’t last in the long run) to keep water from getting in. Always best to REMOVE unnecessary piping that comes through a basement wall, especially block, brick basement walls and seal/waterproof the wall, hole etc on the outside.
Would be a small job, only need to ‘do’ that area outside, NOT 1/2 or the entire wall as some think, erroneously claim.

and…
http://picasaweb.google.com/101049034584960315932/BasementWaterproofing06#5442162385587957666 These gaps, deteriorated joints etc were under a concrete slab. Some tell homeowner to replace the slab or mudjack the slab or caulk etc along egde of house and concrete slab, won’t work! Need to, find all exterior cracks, gaps, openings and seal them all correctly

Different home, pipe comes through foundation wall, see gaps AROUND pipe that were not sealed/waterproofed correctly, they should have FIRST used hydraulic cement, then mastic and visqueen…
http://picasaweb.google.com/101049034584960315932/BasementWaterproofing71#5884156722085937282
Explained in full to these homeowners that IF there is a crack/other opening IN THE PIPING then, water WILL get INTO the pipe and come in basement, NOT my fault, and they’ll need to get the plumber to REPLACE the parts of exterior pipe that have cracks etc.
Or in the future, a crack or other openings could occur in the exterior pipe which then would allow water in basement again.

Again, x-amount of water ‘could be’ getting into that pipe, on the outside through the end of pipe or through any openings etc IN the pipe, outside.

Have also seen a water line and sprinkler line/hose that comes through the basement wall… a crack etc occurred IN the line–hose WHERE it came through the wall, yes, inside the a block wall which then allowed water to drip down into other blocks and eventually onto basement floor PLUS, they did have exterior gaps etc on the outside of wall, where the pipe comes through wall so, they needed to get someone else to replace line–hose and then we did the waterproofing on the outside of those areas.

Pic’s 7–15 under a deck…where the pipe comes through the wall
http://picasaweb.google.com/101049034584960315932/BasementWaterproofing27
So someone tried filling this pipe on the INSIDE of basement/wall but THAT did not stop, did not keep water from getting INTO pipe on the outside. Remove the pipe and seal/waterproof all exterior openings, no more water.
Zero in on photos 14 and 15!!! See the pipe. see the WATER in the pipe? lool

I told ya Simon!

this guy is always helpful, and a WEALTH of useful information!

Fellas- Thanks for your replies- First time I posted on here and I really appreciate the time taken!

Hope it helped you some Mr. Walker.