This install was giving me and my clients headaches from CO spillage.

After seeing the poorly sealed cap at the chimney, then the improper connected pipe at the water heater/chimney, follwed by the wye fitting not in use and improperly sealed.

I then open the chimney cleanout and looked up and noticed the liner. I figured since the water heater flue was loose I would pull out.

Not only are the major Cleveland sports teams bad, but so are a lot of the unqualified professioanls that work on houses around here!!! 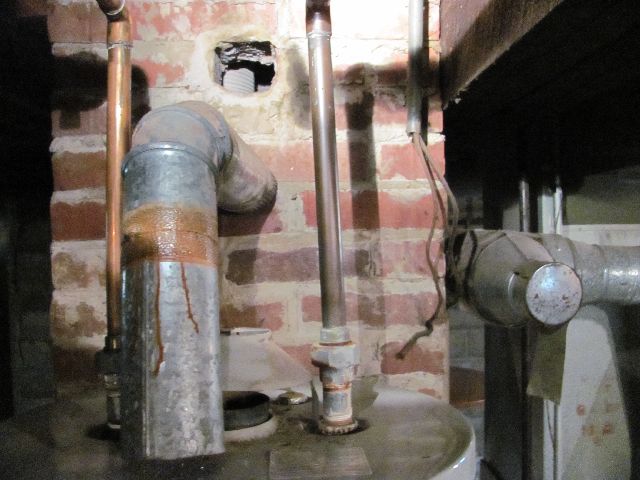 Maybe I should rephrase my post as what do you see wrong or potential wrong with these photos, added one.

I hate to see my posts with no responses, must be boring you guys/gals!! 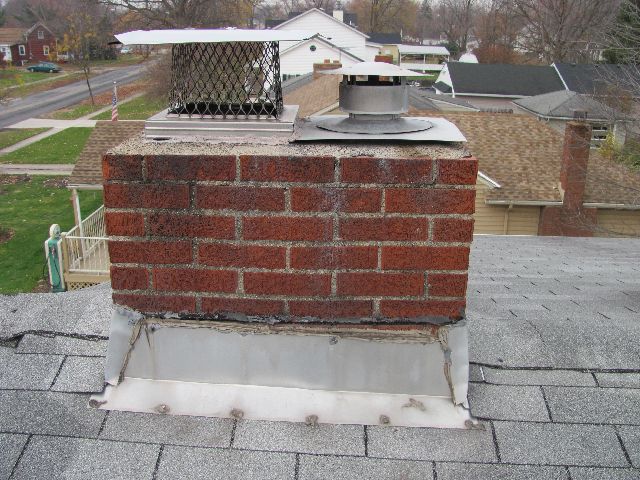 Nice piece of art there David, just got distracted by the next door neighbors chimney and a fuel pump station near the residential deck of the other.
Can’t tell if that was a poor excuse of a reglet for the flashing or they just happened to have a couple tubes of caulking and alluminum flashing handy.
A few course lower and properly installed lead flashing would have done a better job, but doesn’t look like they would have known how to do it anyways.
Don’t people know how to build anymore.?

Previous pictures, they just forgot to provide a tee for the breaching hook-up and were those dieelectric union fittings by any chance?

Good pictures of how things are not done. :mrgreen:

There is a tee, it is off the furnace vent with duct tape securing the cap.

Yes they are dielectric unions.

So if i am seeing this right they ran the hw exhaust into a sealed flue…is that what i am seeing David?

Since the water heater flue was loose and since I noted the liner at the exterior and the clean out door I just had to pull out the pipe.

We all were feeling the CO gases. Before I removed the pipe of course.

I turned the water heater down to vacation.

I laughed when the agent asked why I did not do a CO test.

I said look at the clients face, he is pale and needs to go outside.

Jim do you get a lot of dumb installs over on your end of town or is it just me:D

I thought that is what I said, I see a hole in the chimney and a beaching removed from the hot water tank and a flex flue running up the chimney with no hook up tee to the flex sleeve.

What a stinking mess.

Good job David.
Being a detective is makes the difference between a good and bad inspector.

Hmmm …did you go above sop?

Also is the vent on the left at the chimney cap the furnace or is it for a fireplace? They should be separated as the nearness of the two vents could cause down drafting down the other should the house depressurize while only one vent is in operation.

Also is the vent on the left at the chimney cap the furnace or is it for a fireplace? They should be separated as the nearness of the two vents could cause down drafting down the other should the house depressurize while only one vent is in operation.

No, only the furnace is in the metal liner. The water heater is in the clay liner. It is supposed to go into the metal liner with the furnace. There is the capped wye, but do to the height of the tank or the lowness of the wye the could not figure how to install right.

The fireplace is on a seperate flue.

Here is a pic of the metal liner as viewed thru the clean out door by the mecahnical systems. Water heater flue not connected. 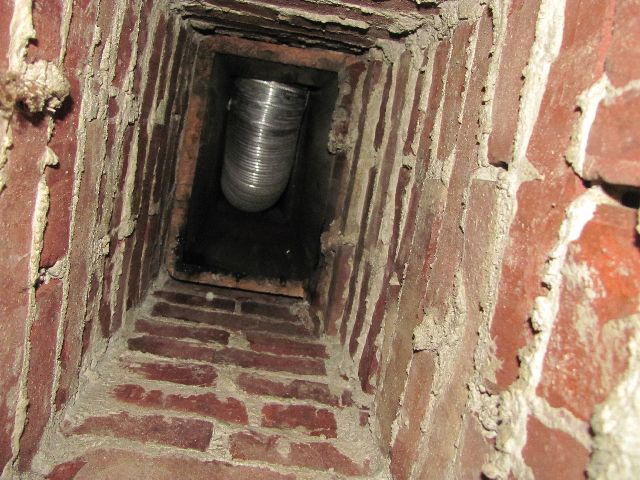 Definitely not correct then. Good catch.

Guess the installer for the liner could not figure out that they could install at a higher entry into the chimney and vent both furnace and water heater. At present the water heater is venting into an enclosed cavity.