Of all the house components we inspect decks due to their size, weight and height has the greatest potential to injure or kill out clients. In an effort to educate the home buyers and manage their expectations on the limitations of deck inspections performed as part of a normal home inspection I have developed this draft statement to include in my reports. I would like some feed back if you have time.

**Note: **The inspector will make an attempt to point out visible deck defects discovered during the course of a normal home inspection. However, every deck is unique and determining the overall structural stability and load carrying capacity of individual members and connections is outside the scope of this inspection. Many critical items and details that affect the stability and load carrying capacity can be hidden from view such as:

• Existence and condition of flashing between the ledger board and the house.
• Condition of bolts nails and screws, including rust and corrosion.
• Grade, moisture content and extent of decay in wood members.
• Condition of columns and members in contact with soil.
• Depth and size of footings below ground.

Detailed structural engineering analysis is a separate service available that may involve drilling, removing members and connections to determine engineering properties needed to perform a thorough analysis. This service is typically available only to the homeowner and is performed under a separate agreement.

Randy you might want to mention that not bolting the ledger board and using nails along with lack of joist hangers is the most common and leading cause of collapse.

Flashing is just one of those automatic write ups. Yes it causes water Intrusion issues but most seem to for some reason not have many issues.
I rarely see enough rust on bolts or fasteners to be of a big concern around here though I suppose it may depend on climate and age of the porch or deck.
Not sealing is another issue with wood decks and they should be sealed top plus bottom.

Randy you might want to mention that not bolting the ledger board and using nails along with lack of joist hangers is the most common and leading cause of collapse.

Flashing is just one of those automatic write ups. Yes it causes water Intrusion issues but most seem to for some reason not have many issues.
***I rarely see enough rust on bolts or fasteners to be of a big concern ***around here though I suppose it may depend on climate and age of the porch or deck.
Not sealing is another issue with wood decks and they should be sealed top plus bottom.

the heads of fasteners is not what provides the structural integrity

You should some the dandy’s here, ever renting a cabin in the mountains be sure to look around . I sure you be sitting inside from that point on .lol

I am picturing some guy from little Abner on a deck overlooking the mountains kicked back on a rocking chair with straw planted firmly in teeth right now.
Does not instill trust in his new deck one bit.

“yep built this baby from scrap wood off the Highway and she is a beauty”.

You forgot the road kill cooken on the open fire.
Agreed with your #2 post.
Not much hardware rust. Mostly nail on the ledger board and lack of lag bolts and full washer assemble and spaced 16" on center.
Hangers are becoming the norm.

I only disclaim a deck if I can not visibly see under it…outside of that I treat it as if it’s another structural framing system…much like looking under crawlspace.

As to flashing…if its not visible then I annotate it in the body of the report as long as there are no adverse signs I can see from inside the crawl or basement.

Obviously each inspector must approach his liability to an extent they feel comfortable however there gets a point that a client will ask themselves what are the actually paying for it not a thorough inspection.

The biggest hazard I see personally see with decks are open risers…I write them up from a safety standpoint.

Do you have a similar statement for the foundation when frost walls are up. Most decks are pretty easy to inspect as its all out in the open. If its really low I can still stick my camera in to see whats going on. If the framing is obscured besause of vertical members on the exterior, I pull one off on either side and stick my camera in. Decks are generally easier to inspect then foundations or under floor framing in my opinion.

I do write up the visible issues I see on decks. The point I want to make clear is there are items in a deck we cannot see and some of these items can have a significant impact on the deck’s stability. Decks are one of the few items we inspect that can kill you and deserve in-depth inspections beyond the normal home inspection IMO. From my experience 95% of my clients understand the need for GFCI outlets and not having them can kill them. I would say less than 5% of my clients know that nailing a ledger board to the house could cause a deck collapse that could kill them just as dead as the lack of GFCI outlets. Its this lack of knowledge about decks IMO I feel needs to be pointed out to our clients. This information can be presented as disclaimer or written as an educational FYI note, but I feel our clients need to know. 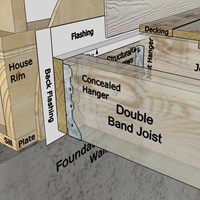 Attaching a Ledger Board for Your Deck | Decks.com

Properly installed ledger boards provide strength and support to decks attached to homes. View the by step-by-step tutorial for attaching a ledger board when building a new deck at Decks.com.

Not saying anything is wrong with your disclaimer… but lets face it, we observe over 100,000 pieces that make up a home…we know there are multiple times that number that we don’t see yet we don’t disclaim if the studs were properly nailed, address header sizes etc. Yes nailing a deck to a home is not kosher and I would write that up…but I simply don’t feel that decks are at the top of the red flag list other then those items I previously pointed out.

Currently my contract consist of 2 pages ( 9 point font) of which is a statement that items which are not visible (latent or concealed) are outside the scope of our inspection and as such are not included in same. I am sure I could include quite a bit more however the fact of the matter is that even with the best contracts one can still be hauled to court and either your insurance will pay out or if you don’t believe in option then you let a jury of your peers decide what is reasonable…I accept this as part of our profession and elect not to have 10 pages of disclaimers…again if you feel comfortable in adding that to your statement more power to you.

In the event an issue is discovered the client has 14 days to give written notice, failing to do same they waive all liability whatsoever.

I agree with Jeff Haynes.

but I simply don’t feel that decks are at the top of the red flag list other then those items I previously pointed out.

Jeff don’t you think that a lot of decks are built by homeowners or friends of homeowners or the group of good ole boys with a full cooler on the weekend?

I believe decks are red flags because the level of competence or knowledge by the builder is usually suspect.

12 Die in Chicago As Crowded Decks Collapse at a Party

jhaynes
but I simply don’t feel that decks are at the top of the red flag list other then those items I previously pointed out.

12 Die in Chicago As Crowded Decks Collapse at a Party

Twelve people are killed and more than 50 injured when wooden porches on Chicago apartment building collapse in three-story chain reaction; investigators say there were hundreds of people at party in second and third floor apartments, and up to 80...

I agree with Jeffery on this one. :shock:

I understand the visible and unknown issues with decks, 75% or more of decks I’ve seen are built wrong.

Yet another with missing lag bolts.
Funny toilets may be a better education study to some.

Bob, this deck was Several Decades old, it said.
Doesn’t the owner ever check anything pertaining to maintenace?

Do you know what this product is;