Do you see it?

Winner gets a dirty pair of my skivies.

do you see the problem? 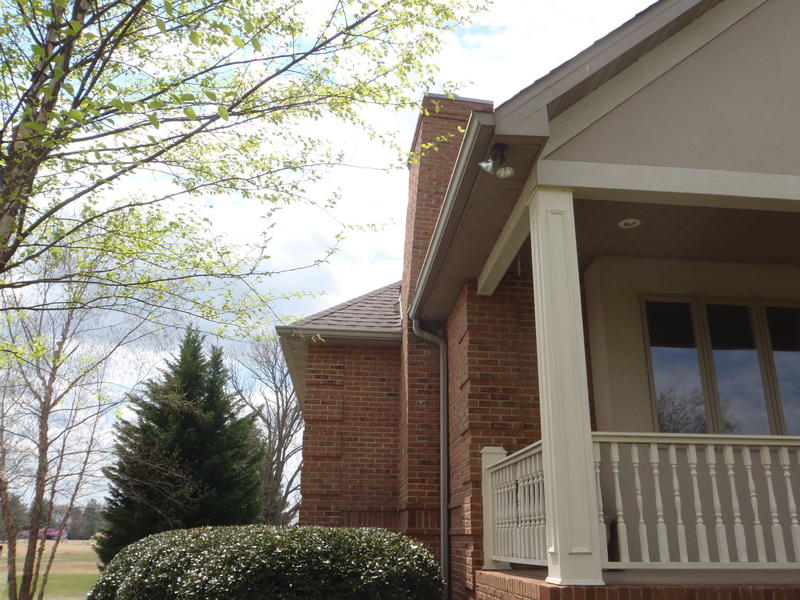 What’s with the one different spindle on the side of the porch?

Smaller bricks on the back side.

No downspout on portion of rain gutter?

Flood light being on the wrong side of the soffit…Just saying that it may be subject to moisture.

Cant agree with the chimney lean without a better photo.

Brother Bob, Cousin Bill, and Uncle Robert got together and drank 3 cases of beer. This gave them imagination and energy, so they said, “Hey, let’s put a chimney on that thar house”. When they were building it, they leaned the ladder against it as they went up, and caused the chimney to lean. When asked, Uncle Robert told them it was to shear the water off the chimney cap…

two different kinds of spindles on the front porch, not a defect, but a cosmetic issue, unless you’re a heartless, RE agent-hating deal killer…

I saw the leaning chimney as well.
No skivies please.

Interior pot light on the porch.

The chimney had a small horizontal crack right at the roof line.
A cathedral ceiling was exactly where that spot was, so no loooking at it from the attic.
I have a fealing they somehow did not brick it fully on the back side, or used the roof as the support structure.
Kinda scary.

Bob is the winner!
Your package will be in the mail tommorrow. Should I mail them to Linas instead?

I thought my eyes were playing tricks on me. The leaning chimney mixed with the lines of the porch and hip of the roof made it almost look like an illusion.

A bead of structural silicone will work in that crack to prevent further tipping, deal killer. :roll: