I was looking up the clearances for the vent on a Paloma tankless water heater and found this on the installation guide:

“The vent can be installed with a slight downward slope of 1/4” per foot of horizontal run toward the vent terminal (see diagram below). This ensures that any condensate formed during operation of the unit is evacuated from the appliance”

Do the other tankless water heater manufacturers having similar installation recommendations? I would have never guessed that it was okay, or even recommended, to put a downward slope on the vent. I looked up a couple of different models (direct vent and non-direct vent) and the recommendations were the same.

The full PDF install guide can be found at: 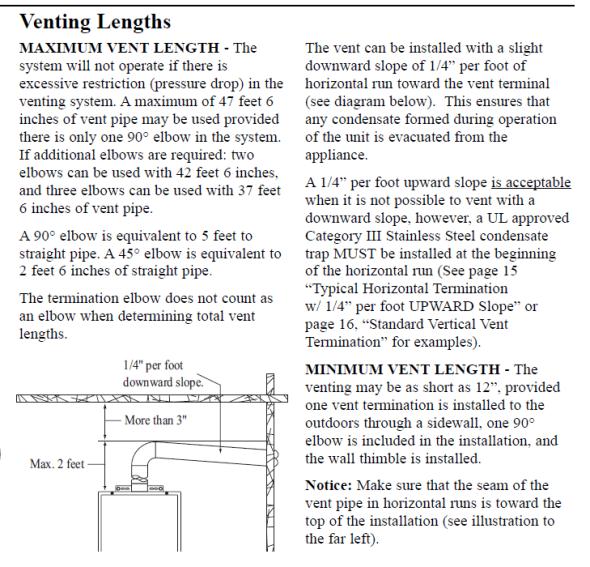 The answer to your question is determined by each manufacturer.

I am surprised because this is the first time I have even thought about tankless in a long time.
They are simply not popular at all in the Chicago area.

I recently had a Noritz NR 71 installed. These tankless units are draft assisted so a slight downward slope wouldn’t make make much of a difference. All of the ones I’ve seen are wall mounted and have short exhaust runs.

Yes, it is on a by manufacturer basis. I had similar installation instructions on a high efficiency boiler.