I live in Nova Scotia our home is 1 year old build slab on grade with frost wall, no drainage tile. The smell is on one side of the first floor. I would like to go into the whole story and send pictures but I do not know how to.


Also I would like to ask if anyone has had any dealings with the Home Warrantys.

We are paying $10,000 of our own money to start to correct our many problems.

My son ended up on life support with his asthma and it is important before we bring him home that everything is safe and fix.

here are some pictures 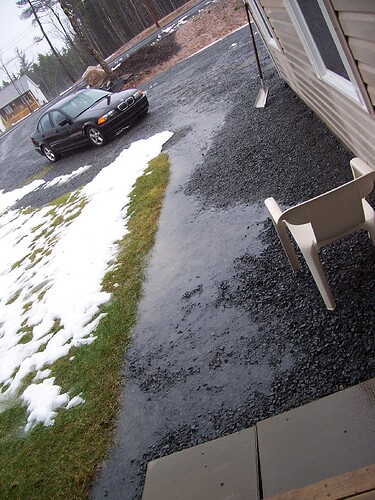 Originally Posted By: roconnor
This post was automatically imported from our archived forum.

I would hire an environmental specialist to check things out, including the mold.

We had air samples done and we have aspergillus ver which is a toxic mold. From what we understand it is a celulose mold. It goes on anything to do with paper. Like gyprock, wood etc.


What we have noticed is the last strip on one entire side of the house has buckled and the wood has pulled away from the house. The New Home Warranty assures us this is quite normal however the the we have hired and others is it is not. The mold smell is on the same side of the house.

We are in a most difficult possition. One of the managers that works in the builders company also is a board member on the Home Warranty Program. Thererfore we can not get any of the work done.

I was wondering in Canada if anyone else has had a difficult time with the home warranty program.

Originally Posted By: bking
This post was automatically imported from our archived forum.

Unfortunately you have one of those rare situations where you should hire an attorney. It sounds like you have a genuine problem with that house.


I do not like to recommend this because it causes other people to do the same when they are misinformed and the lawyer will not usually tell you that, they just take your money.

Just have him write some letters and include all of your inspection data, this should get some action. Don't let him be the point of contact, have the letter state that an answer should be provided to you within 15 days.

As the saying goes, "never let your lawyer talk to their lawyer" because it will cost you dearly.

Originally Posted By: dverge
This post was automatically imported from our archived forum.


If the home is less than a year old follow the warranty provisions and file a formal complaint against the builder and follow up with a formal request for warranty conciliation. If the one year provisions still apply and a formal investigation results it is likely to be limited to a determination that the house was/was not built to existing standards and the appropriate materials were used, and whether the materials and manner of assembly are defective.


Thank you for your advise. We hire an national restoration company to correct the problems. It is going to cost us well over $10.000.00.

So far it appears we have several problems. The issue of no drainage around the house and clay soil may have trapped the water under the slab and the water became stagnate.

One drainage pipe was installed by the builder about a month ago and the smell of the water that flowed out was the same smell we are getting in the house.

The immediate issue is to prevent the smell from entering the interior. The restoration company is cutting 4 inches off the bottom exterior gyprock which had the odor and filling in the cracks in the concrete along the same wall with black caulking. Any open plumbing pipes they are cementing around.

As they do each room the interior seems to be getting better.

They shortly will be installing drainage tile around the house and a french drain on one side.

The grading of the land is incorrect and will have to be redone to prevent all the water from flowing to the house.

I am very disappointed in our municipality (for approving the building with out drainage tile) , the builder and the home warranty. It appears we are on our own.

Even through the home warranty decision was in our favour, that is as far as they will go.

Obviously like many other consumers we assumed that the home warranty was an insurance that should the builder fail to rectify the problems they would cover them even in the first year.

When I look back at all of this I think it would have been wise to hire a home inspection company to act as a project mgr to monitor the construction. The extra cost would have been worth it compared to what we have and are going through now.

Originally Posted By: dverge
This post was automatically imported from our archived forum.

You should be aware that very few NS municipalities/Counties have formally adopted any form of building code(Federal or Provincial) as such it is very difficult to seek redress from them on a question of liability.


THe warranty company however is another issue. Through its contract with builder and its limited warranty provided to home buyers it has a fundamental provision setting out the home will be built to building code standards, and to ensure that any defects that become manafest within the warranty periods are addressed. They can’t escape those obligations.