Main disconnect breaker is also in the panel. It’s 150 amp.
The label rating says 125 amp max.
This was just discovered after the report was issued.
What do you think the fix, if any, would be?
The INachi inspector contacted me but is shy so I’m putting it up here. 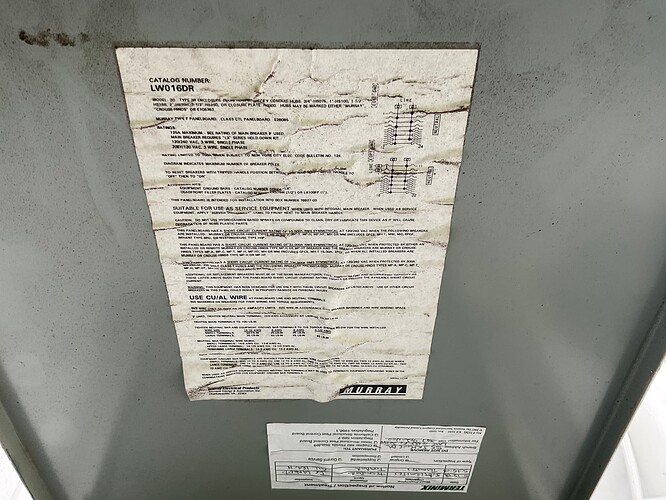 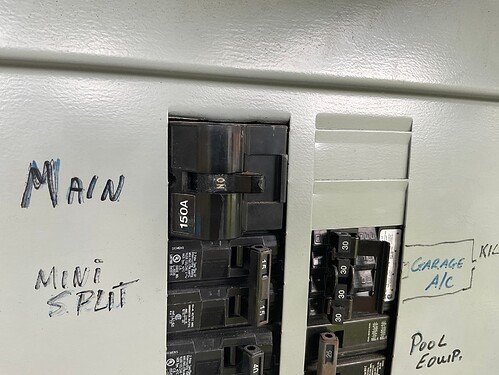 So, the report stated 150A but the panel is 125A? I’d personally probably just let it go as it’s very unlikely anyone will refer to or rely on the report for the information. Granted, if they did the inspector could have some egg on their face. Inspector could issue a follow-up email with an updated report.

In +/- 7000 of my own inspections and 25,000 more that my company has performed I honestly can’t remember fielding a single phone call or question about service size listed in the report. I can probably count on one hand the number of times anyone has asked at an inspection. Usually, when they do it’s because they have plans to add on or build a shop or something. It’s just not anything most people are aware of or care about. As long as the hairdryer and TV work they’re good.

I think it is simple.

Dear client, I have revised section xyz. Please review the changes and discard any previous versions of the report.

Have a good day.

Email client an addendum with the correction.

No, I don’t think this is as simple as writing an addendum saying the panel capacity is written wrong in the report. If the installed breaker is 100 amps and the maximum panel rating is 125 amps then you might get away with writing an addendum.

I mean sure if you never pull more than 15 amps or do so rarely on that circuit, the wire is not going to burn up and this could go on for decades. The same is with this decades old murray panel. It obviously hasn’t caught fire yet…but the inherent potential to overheat/catch fire is there no?

I guess this is something you’d have to ask an electrician. If that 150 amp breaker has to be replaced, where are you going to source an old breaker? If you can’t source the breaker, I guess you’d have to replace the whole panel? Or can you get an electrician to write a letter with his license on the line that a 150 amp breaker is okay in a 125 amp panel and that you are unlikely to pull more than 125 amps of current anyway?

No, I don’t think this is as simple as writing an addendum saying the panel capacity is written wrong in the report.

I agree, you should change the report to include why it is a problem (manufacturer maximum rating is exceeded) and the recommendation (evaluation by a qualified electrical contractor).

The way it was taught to me is the “service rating” is the lowest of the following three factors: Wire size, Main breaker, Panel rating. At times the rating can be theoretical. Meaning you could conceivably pull more than 200A through a 200A panel. The example I was given was an older split-bus that doesn’t have a main breaker. The sub-mains (six switches) often total up to more than 200 and could be used at the same time to pull more than 200A and nothing would trip or fail. I suppose modern day since there is always a main breaker this situation is becoming less and less likely.

I’ve seen some really cranky inspectors refuse to commit to a single service rating. They list each of the three - wire gauge, main breaker size and panel rating with an explanation that the max is should be the least of the three.

According to NACHI SoP it’s not necessary. I suspect some states have other requirements.

That’s an interesting caveat in the part you highlighted, “if not visibly labeled”. Are they talking about the panel or the breaker? Both?

Are they talking about the panel or the breaker? Both?

That’s an interesting caveat in the part you highlighted, “if not visibly labeled”. Are they talking about the panel or the breaker? Both?

The highlighted part is for the “panel”. Above in Section II. B. the disconnect’s amperage must be reported

I look at the problem from the code enforcement inspector mindset.

Yes, it is only a 20% increase of the UL rated max., but would you be comfortable with a 60% by dropping in a 200A. main breaker? Probably not. The rules are the rules and we are here to enforce or make the client aware when we know that there is an issue.

I see the issue similar to a DYIer dropping in a 2-P 40A. branch circuit breaker for a range that is cabled with AWG-10 previously protected with a 2-P 30A. that tripped frequently, with the 40A. breaker the conductor will heat up and potentially create a fire before the breaker will ever trip.