Musings from the old folks home..

Well…when you get to be like me—an old fart, you can muse. So that’s what I’ve been doing—musing.

Sometimes musing is not amusing, so I have to muse about what I’m musing…about.

Seems like today is my birthday—I don’t usually make a big deal of it (I used to take my mom out for dinner to celebrate my birthday—she had more to do with it than I did), but my wife says it’s a “milestone” (feels more like a “millstone”) and we should celebrate. Man! I’m too stiff and sore to celebrate.

So I been musing about the past…you know, kinda like my life…

Mostly rather boring, but a few exciting or interesting moments.

Like the time about 9 years ago when I was abducted by the alien spaceship. My captors looked a lot like humans, but they were a funny color and walked sort of, like, uh …gingerly—on tippy-toes, you know?

And the ship had great big hairy spiders all over the ceiling, but they didn’t come down to get me, or anything.
(My wife tried to tell me something about a “recovery room” after by-pass surgery—but she couldn’t fool me!!! I know a spaceship when I see one!)

And like the time I swam across Lake Tahoe. Now *that *picks up one’s ears, don’t it…

I know, I know…Lake Tahoe is about 12-13 miles wide.
(I don’t normally tell this part, but I swam from a California shore to a Nevada shore at the southern tip—about 1½ miles. That’s across, ain’t it??)
Still, it was awfully cold. Took about half a hour or so…

Used to ski up there a lot, too. Not much to tell about, though…never got hurt or nothin’.
Skiing’s real easy…just squat down a bit and slide downhill.
(Kept my eyes closed all the way…so if I got killed or something, I wouldn’t know about it.)

Used to go “privy-dumping” in high school. We’d go out to a farm and push the darn thing over—real fun, that was. One time we were in a jeep and I was in the far back, so I made a lariat and lassoed the critter and we dragged it down the hill a ways.

We all felt bad the next day, so we went out to the farmers place and told him that we “heard someone did something with his privy” and we’d like to help him set it up. (Out of the goodness of our hearts.) We drove down and got the thing on the back of a pick-up , brought it back, and set it up again. (We even used it, just to be sure it worked O.K.)

Been hearing on the TV news and reading in the paper that someone is complaining that one candidate for president gets more and better press that the other one. Do any of you thinks that’s true??

Why don’t we have a poll?? Pick either A or B, whichever…

Do you think the news media pays more attention to:

Send your reply to idontgiveadamn.com and receive a free prize.

Didn’t I told you? Huh, didn’t I?? I said if the U.S. started making plans to drill the price of oil would drop. Well, it’s only been mentioned by the gov’t, but I see the price is down to $124 a barrel. We may see it at the pump soon. And remember, you heard it here first.

Well, that’s the end of my time for today….maybe we’ll get together again soon. In the meantime, enjoy and keep the breath-a-lyzer down to .05.

Happy Birthday Jae, Why not take the wife out to dinner, then hand her the check for fun.

Happy Birthday Jae, Why not take the wife out to dinner, then hand her the check for fun.

Actually, *she *took me out for dinner…

There are many great diners in this area, but I usually migrate toward O"Charley’s…and last night was something fairly new on the menu, so I tried it. Man! It was delicious. Jambalaya Pasta–(it’s not really a jambalaya-it just has a very good “Creole Sauce”…). Well worth the trip.

I tried it and it wasn’t hot like I expected it to be. Your right about the good taste. I thought there would be more shrimp in it by looking at the picture.

Happy Birthday Jae - and many more!!!

It is nice to see you enjoying life…Happy Birthday!

4’s not bad wait til you turn jwilliams5, that’s when it really gets tough

4’s not bad wait til you turn jwilliams5, that’s when it really gets tough

nice song Barry…You were easy to recognize but who were your back up singers…was that mario and Duffy ???:shock:

Happy Birthday from the White House

Happy Birthday from the White House

Actually, Condi did stop by with greetings from the whole gang there. Laura called, but I didn’t hear from the cowboy. And I haven’t spoken to Dick in several years (we went hunting once…ONCE!!). 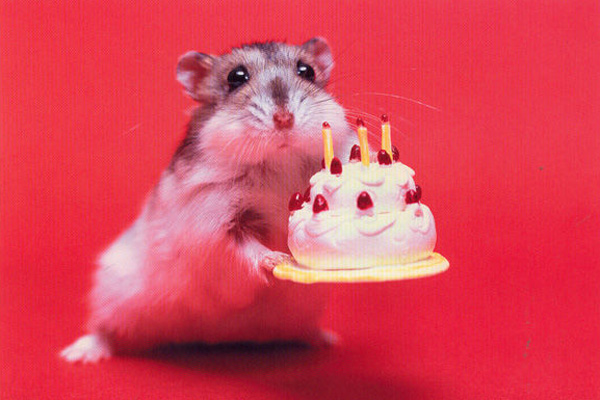 Wow Jae, I thought you stopped having Birthdays.

All the best Jae!! and many more!

Wow Jae, I thought you stopped having Birthdays.

One doesn’t stop having birthdays–one merely fails to admit to advancing senility (which in itself is senile). I refused to believe that I can no longer do what I did when I was 20, or 30, or 40…

The “real” reason I can’t do such things is…

Thanks to everybody…this was fun

I can’t wait until next year so we can do this again!!:cool-cat: :cool-cat: